The establishment survey (CES) showed the economy adding 162,000 jobs in March, the biggest increase since March of 2007.  The household survey (CPS) showed the unemployment rate remaining steady at 9.7 percent with the employment to population ratio edging up to 58.6 percent, an increase of 0.4 percentage points from its low last November.  There has been a substantial discrepancy between the two surveys in the last four months with the establishment data showing job growth of just 53,000, while the household survey shows employment gains (adjusted for population changes in population controls) of 1,765,000.  While the birth/death imputations may now be slightly understating job growth in new firms, it is likely that the establishment survey is still closer to the true rate of job growth. 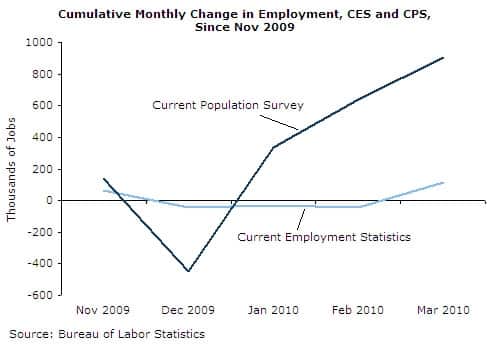 The job gains in the establishment survey reflect a bounceback from weather-depressed levels in February.  This is shown most clearly in construction, which showed a gain of 15,000, the first increase since June of 2007.  However, the March level is down by 44,000 from January.  With construction still trending downward, it is virtually certain that this sector will continue to shed jobs.

Manufacturing appears to have genuinely turned the corner, adding 17,000 jobs in March.  This brings the gains since December to 45,000, almost all of it in the durable goods sector.  It is likely that manufacturing employment will continue to rise, albeit at a slow pace.

Other notable job gains include 14,900 in retail (11,500 of which were in building supply stores) and 26,800 in health care, up from a weather-depressed 14,100 gain in February.  Employment services added 42,600 jobs.  While this is impressive, it is actually slower than the rate of job growth in this sector in the fall.

State and local governments shed 9,000 jobs, a loss that was more than offset by the federal government’s hiring of 48,000 workers for the Census.  State and local governments have shed 72,000 jobs since December, or 24,000 a month.  This pace is likely to increase as the new fiscal year approaches.  Other notable job losers include real estate, which lost 6,100 jobs.  Remarkably, real estate employment is down by only 7.6 percent even though house sales and prices are both down by more than 30 percent.  Information services lost 12,000 jobs; employment in this sector is down by 24.1 percent over the decade.

The job gains continue to go disproportionately to older workers, with people over age 55 accounting for 208,000 of the 264,000 increase in employment reported for March.  Employment for older workers has increased 722,000 over the last year even as it had fallen by 2,671,000 for everyone else.

There was an increase of 295,000 in the number of people involuntarily working part-time, pushing this measure near its recession peak.  The duration measures all hit new highs in March.  There has been considerable confusion on this issue.  The average duration of unemployment spells is undoubtedly longer than ever, in large part because of the extension of benefits.  However, this does not mean that extended benefits have increased the unemployment rate.  The long-term unemployed would feel more pressure to find jobs if the benefit period was shorter, but in a period of inadequate aggregate demand, this just means that they would displace other workers.  This would not increase total employment.

Nominal wages fell in March for the sixth time since 1964.  This is not a good sign for future income growth.

The overall picture here is not very positive.  While we are seeing job growth, it is at a very slow pace.  The average in the private sector over the last two months was just 66,000 jobs.  With the public sector shedding jobs, we will need more rapid job growth just to stay even with the growth in the labor force.

Dean Baker is the co-director of the Center for Economic and Policy Research (CEPR).  He is the author of False Profits: Recovering from the Bubble Economy.  He also has a blog Beat the Press, where he discusses the media’s coverage of economic issues.  This article was first published by CEPR on 2 April 2010 under a Creative Commons license.