We noticed a small news item, reported from Tehran, which we think deserves more media attention and reflection in the West than it received.  According to the story,

Chinese Transport Minister Liu Zhijun is expected to visit Iran Sunday to sign a $2 billion contract to build a 360-mile-long railway linking key Iranian destinations that could later join to existing Iraq and Syrian railway networks and extending to the Mediterranean Sea.

Iran is forging ties with neighbors such as Tajikistan, Iran and Afghanistan as a strategy to rebuild itself as a trade center, ultimately forging a regional alliance that could support it against NATO countries.

The article also quotes Nicklas Swanstrom, who heads Johns Hopkins University’s Central Asia-Caucasus Institute, on what the project means from a Chinese perspective: “It also makes political sense, because while technically the U.S., Europe or Russia could block China’s sea routes, it would also have a land route.  And by tying your neighbor’s infrastructure to you, it brings them closer.”

All of this, of course, is playing out in the wake of the most recent United Nations Security Council resolution imposing sanctions on Iran, the latest round of Iran-related unilateral and secondary sanctions by the United States, and the adoption of “national measures” by a growing number of U.S. allies (e.g., the European Union, Japan, Australia, Canada, and South Korea).  China voted for the most recent UN sanctions and has said that it will abide by them.  But Beijing has also made clear that it does not consider itself bound by sanctions defined unilaterally by other states outside the Security Council — and that, indeed, it considers such measures to be wholly lacking in legitimacy.

None of the initiatives discussed in the news report cited above violate UN sanctions against Iran.  In fact, we cannot see how these efforts would even violate U.S. or other unilaterally-defined national sanctions against the Islamic Republic.  Nevertheless, there have been other indications in recent weeks that China is not going to let a U.S.-led push to maximize Iran’s international economic isolation get in the way of Sino-Iranian economic ties.  India has taken a similar position and may, like China, be acting to strengthen its economic and strategic ties to Iran.

Since the latest round of sanctions was adopted, China has stepped up its “economic diplomacy” and its concrete commercial ties with Iran in tangible ways.  For example, China committed last month to new investments in Iranian petrochemical projects.  As we have noted before, since 2004, all major investment contracts for new energy projects in Iran have been concluded by non-Western companies — primarily Chinese companies.  We suspect that Chinese energy companies will conclude additional new investment contracts on Iranian energy projects in coming months.

These kinds of deals do potentially violate U.S. unilateral and secondary sanctions vis-à-vis the Islamic Republic (if Washington is foolish enough to push the point).  The willingness to take advantage of such opportunities suggests that, while China’s leadership still does not want an open confrontation with the United States, Beijing is prepared to be more assertive in pursuing its interests in — and around — Iran.

While Western media, by and large, paid little or no attention to China’s commitment to build new railways in Iran, non-Western commentators did.  As C. Raja Mohan, dean of India’s strategic commentariat, wrote in The Indian Express, “As the United States steps up the effort to isolate Tehran, China is penetrating deeper into the Iranian plateau.”  Describing the railway deal as “an agreement on one important segment of this new Silk Road between the Far East and the Mediterranean,” Mohan argues that “Like the British Raj and the Russian empire that extended their railways into remote inner Asian frontiers more than a century ago as part of the Great Game, China wants to push transport corridors into all corners of Eurasia.”

But we are even more interested in what recent events indicate about foreign policy assessments and calculations in Tehran.  On the Iranian side, these developments suggest that the current direction of Western policy toward the Islamic Republic — imposing more sanctions, rolling back previously established economic ties, getting ever more exercised over whatever sensationalized human rights case du jour is attracting the most Western media attention — is accelerating Tehran’s exploration of what can be described as “regional” and “Eastern” options for Iran’s foreign policy.

There is a human dimension, as well, to the “Eastern option” in Iranian foreign policy.  When we visited the University of Tehran in February, we had the opportunity to tour the university’s Confucius Institute, sponsored by the Chinese government to provide Chinese-language instruction and facilitate opportunities for Iranian students to study in China.  There is clearly growing interest among young Iranians in such opportunities; we were told that the Confucius Institute’s offerings are the fastest-growing foreign language program on the campus.

More broadly, a number of our academic colleagues in Iran have described to us how the population of young Iranians studying abroad is shifting from Western locations (North America, Australia, Britain, and elsewhere in Europe) to places like China, India, and Malaysia.  Ultimately, this trend could have a profound impact on the international orientation of the next generation of Iranian businesspeople, government officials, and thought leaders. 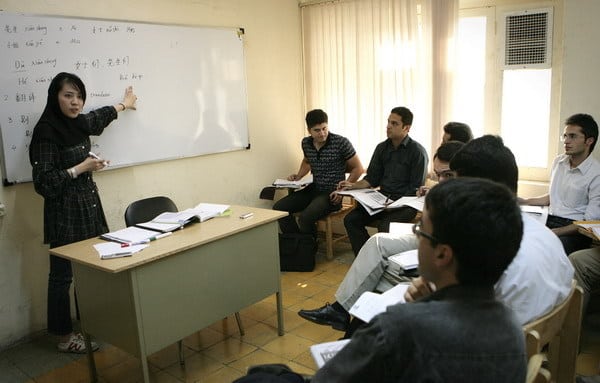 Volunteer Wang Yue from China gives lessons to Iranian students at the Confucius Institute of the University of Tehran, 30 August 2010 (Xinhua).

Flynt Leverett directs the Iran Project at the New America Foundation, where he is also a Senior Research Fellow.  Additionally, he teaches at Pennsylvania State University’s School of International Affairs.  Hillary Mann Leverett is CEO of Strategic Energy and Global Analysis (STRATEGA), a political risk consultancy.  She is also Senior Lecturer and Senior Research Fellow at Yale University’s Jackson Institute for Global Affairs.  This article was first published in The Race for Iran on 8 September 2010 under a Creative Commons license.