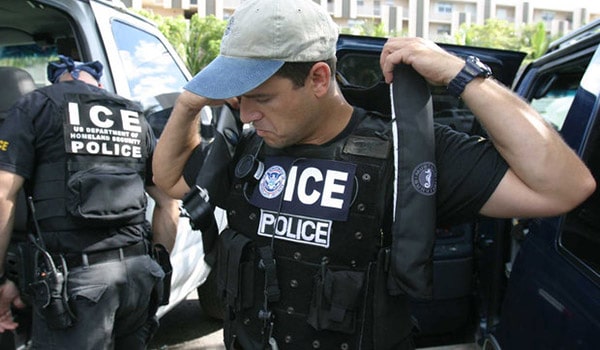 A U.S. Immigration and Immigration & Customs Enforcement (ICE) agent prepares for a raid.

The national sweeps by Immigration and Customs Enforcement (ICE) agents in the second week of February drew a great deal of media attention. Some of the coverage was devoted to analyzing whether the arrests of about 680 immigrants marked the start of a massive deportation campaign by the Trump administration. Some focused on the impact the raids had on the immigrants themselves and on their families, which often include U.S. citizens and green card holders. But there wasn’t much discussion about the impact of the raids on other working people—on citizens without immigrant friends or relatives.

For example, how much did these raids cost taxpayers?

A thorough 2010 study by the Center for American Progress estimated that the average cost of identifying, apprehending, detaining, processing through the legal system, and removing an unauthorized immigrant was $23,482. So we can expect the final price tag for the arrest and eventual deportation of 680 immigrants to be nearly $16 million, while the likely cost of President Trump’s promise to deport the 2 to 3 million immigrants he considers “bad hombres” would present us with a bill of $47 billion to $70 billion.

But this would be worth it, Trump supporters will argue. After all, unauthorized immigrants cost us “hundreds of billions of dollars” through their effects “on our schools, on our hospitals, on our welfare system, on our wage earners,” according to senior White House adviser Stephen Miller during a February 12 appearance on ABC News.

Miller didn’t cite the source for his “hundred of billions of dollars.” Even the rightwing Center for Immigration Studies (CIS), which calls for restricting all immigration, doesn’t support this number. A 2004 CIS study estimated that families headed by undocumented immigrants were costing the federal government about $10.4 billion a year. Since undocumented immigrants are barred by law from receiving most government benefits, the bulk of this cost involved family members who were citizens and legal residents. So what happens when we deport undocumented people who are the heads of these mixed households? With the breadwinner gone, U.S. citizen family members—especially children—will require more social services than before. Deporting the heads of households actually increases the burden on taxpayers

But weren’t these deportees “taking our jobs”? Won’t the raids at least “make America work again”?

Not really. It’s true that the presence of undocumented immigrants in the workforce creates a downward pressure on the wages of the citizens and legal residents employed in the same types of jobs. But the reason for this is that undocumented workers are generally paid less than authorized workers, so the two groups are forced into wage competition with each other in what labor organizers call a “race to the bottom.” And why do the undocumented work for less? There are a number of reasons, but probably the most important one is simply the fact that they can be deported.

Politicians and the media rarely discuss this factor, but Hillary Clinton mentioned it in the heat of the 2016 presidential race. During the October 19 debate with Donald Trump, she explained why the native born would benefit from a legalization of the undocumented population:

Now, what I am also arguing is that bringing undocumented immigrants out from the shadows, putting them into the formal economy would be good. Because then employers can’t exploit them and undercut Americans’ wages. And Donald knows a lot about this. He used undocumented labor to build the Trump tower. He underpaid undocumented workers and when they complained, he basically said what a lot of employers do. “You complain, I’ll get you deported.” I want to get everybody out of the shadows. Get the economy working and not let employers like Donald exploit undocumented workers, which hurts them but also hurts American workers.

This is not to claim that Clinton would have followed through on her promises, but what she said was correct. Undocumented workers live under a constant threat of deportation—of losing the lives they’ve built here, their jobs, their homes, their communities, and too often their citizen children and spouses. The fear of deportation hangs over these workers whenever they consider asking for a raise, or reporting unsafe conditions on the job, or organizing a union or a job action. And the ICE raids intensify this fear—usually not enough to make the immigrants return to the even worse situations in their home countries, but enough to push many of them into accepting still lower wages and still more dangerous working conditions.

The result is that if you or your family members work in job sectors with high participation by the undocumented—in construction, for example, in food preparation, in maintenance or in cleaning—these raids will have a direct negative impact on your household income.