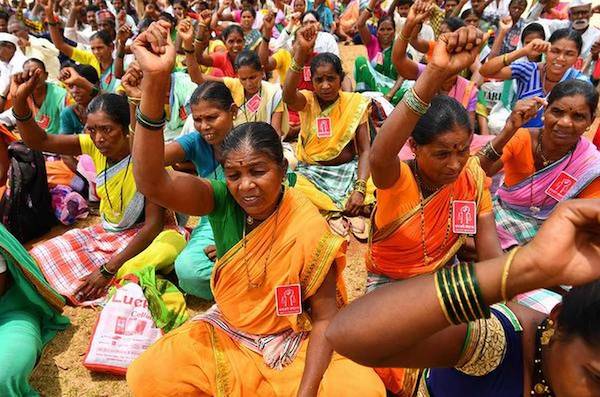 Why Gandhi and Marx are more relevant now than ever before

The 150th birth anniversary year of Mohandas Karamchand Gandhi and the 200th birth anniversary of Karl Marx went by this year. Such anniversaries can become occasions of tokenism—for instance, the Indian government has set up a committee with more than 100 members to coordinate celebrations of Gandhi’s anniversary, crammed with political bigwigs from various parties, a few academics and Gandhian workers. I am sceptical it has achieved much more than a significantly heightened scale of the hypocritical display that October 2 brings around every year. Hopefully I’m mistaken, but since any meaningful homage to Gandhi would call into question the very fundamentals of today’s political and economic power, and point a sharply critical gaze at the rampant abuse of religion and nationalism, I think I’m pretty safe in being sceptical. And so too perhaps for Marx, at least where the celebrations are being led by so-called revolutionary governments in those parts of the world where Leftist parties still hold power.

This does not mean that these two figures are of no relevance now. On the contrary, they are even more so than before. Their legacy is crucial for the majority of the world’s population, marginalised by capitalism, statism, patriarchy and other structures of oppression. As it is for the rest of nature, so badly abused by humanity. And it is a legacy that is still alive and thriving, not so much in the orthodox Gandhian and Marxist organisations and in academic circles where the tussle between the two ‘ideologies’ is more dominant than the urge to make them relevant to the struggles of the marginalised, as in these struggles themselves.

And so we must turn for hope to the many movements of sangharsh (resistance) and nirman (construction) throughout the world. These movements realise that the injustices they are facing, and the choices they must make, are not bound by the divides that ideologues play games with.

Let’s take sangharsh. At any given time in India, there are dozens of sites where Adivasis, farmers, fisherpersons, pastoralists and others are refusing to part with their land or forest or water to make way for so-called development projects. One thousand farmers have filed objections to their lands being taken up by the Prime Minister’s pet project, the bullet train. News that is both inspiring and depressing keeps coming from Latin America, of indigenous people standing up for their territorial rights against mining and oil extraction, and all too frequently paying the price when state or corporate forces kill their leaders. Nationwide rallies were organised by the National Alliance of People’s Movements and the Ekta Parishad in October. They involved movements for land and forest rights, communal harmony, workers’ security and other causes that are not so easy to place in any ideological camp.

The same goes for nirman, or the construction of alternatives. Across the world there are incredible examples of sustainable and holistic agriculture, community-led water/energy/food sovereignty, worker takeover of production facilities, resource/knowledge commons, local governance, community health and alternative learning, inter-community peace-building, reassertion of cultural diversity, gender and sexual pluralism, and much else.

It is in many of these alternative movements that I find inspiration for building on the legacies of Gandhi and Marx (and Ambedkar, Rabindranath Tagore, Rosa Luxemburg and various luminaries) and, equally important, on the many indigenous and Adivasi, Dalit, peasant and other ‘folk’ revolutionaries through history. There are many examples that dot the Indian landscape: the few thousand Dalit women farmers who have achieved anna swaraj (food sovereignty) in Telangana while also transforming their gender and caste status; the several dozen Gond Adivasi villages in Gadchiroli that have formed a Maha Gram Sabha to stop mining, and work on their own vision of governance and livelihood security; a Dalit sarpanch near Chennai who combines both Marxist and Gandhian principles in his attempt to transform the village he lives in. Similarly, there are others across the world: a thousand people have experimented with anarchic community life in the ‘freetown’ of Christiania in Copenhagen for four decades; indigenous peoples in Peru, Canada and Australia have gained territorial autonomy; small peasants in Africa and Latin America have sustained or gone back to organic farming; fisherpersons in the South Pacific have their own network of sustainably managed marine sites.

What I find of significance in many resistance and alternative movements is the exploration of autonomy, self-reliance, people’s governance of politics and the economy, freedom with responsibility for the freedom of others, and respect for the rest of nature. While these movements do often call for policy interventions from a more accountable state, there is also an underlying antipathy to the centralised state, as there is in both Gandhian swaraj and in Marxist communism and in many versions of anarchy. Private property is also challenged. In 2013, the Gond village Mendha-Lekha in Maharashtra converted all its agricultural land into the commons. Note that commons here does not mean state-owned, a distorted form of ‘communism’ that has prevailed in orthodox Leftist state regimes.

And while Gandhi was weak on challenging capital, and Marx on stressing the fundamental spiritual or ethical connections amongst humans, these movements often tend to bridge these gaps. Insofar as many of them integrate the need to re-establish ecological resilience and wisdom, some even arguing for extending equal respect to other species, they also encompass Marx’s vision of a society that bridges humanity’s ‘metabolic rift’ with nature, and Gandhi’s repeated emphasis on living lightly on earth. With this they also challenge the very fundamentals of ‘development’, especially its mad fixation on economic growth, reliance on ever-increasing production and consumption, and its utter disregard for inequality.

This is not to suggest that Gandhi and Marx can be happily married; there are points of tension (for instance, on the issue of non-violence as a principle). There are points of ambiguity in recognising that indigenous peoples have already lived many elements of their dreams. But I have found enough in grassroots movements to be convinced that there is critical common ground amongst them, if our ultimate goals are well-being, justice, and equity, based on ecological wisdom. We would do well to honour their legacy by identifying such common ground and building on the struggles and creativity of ‘ordinary’ people in communities across the world.

Ashish Kothari is with Kalpavriksh and Vikalp Sangam, Pune