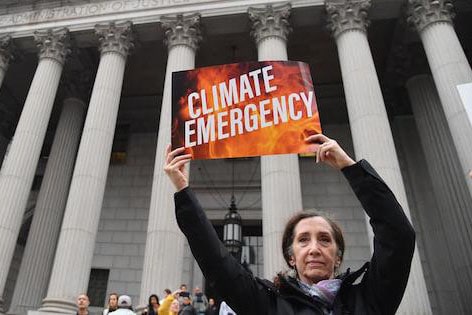 The text below, authored by William J. Ripple, Christopher Wolf, Thomas M. Newsome, Phoebe Barnard, and William R. Moomaw, was endorsed by 11,258 scientists from 153 countries. The full list is available in Supplemental File S1. —The Editors.

Scientists have a moral obligation to clearly warn humanity of any catastrophic threat and to “tell it like it is.” On the basis of this obligation and the graphical indicators presented below, we declare, with more than 11,000 scientist signatories from around the world, clearly and unequivocally that planet Earth is facing a climate emergency.

Exactly 40 years ago, scientists from 50 nations met at the First World Climate Conference (in Geneva 1979) and agreed that alarming trends for climate change made it urgently necessary to act. Since then, similar alarms have been made through the 1992 Rio Summit, the 1997 Kyoto Protocol, and the 2015 Paris Agreement, as well as scores of other global assemblies and scientists’ explicit warnings of insufficient progress (Ripple et al. 2017). Yet greenhouse gas (GHG) emissions are still rapidly rising, with increasingly damaging effects on the Earth’s climate. An immense increase of scale in endeavors to conserve our biosphere is needed to avoid untold suffering due to the climate crisis (IPCC 2018).

Most public discussions on climate change are based on global surface temperature only, an inadequate measure to capture the breadth of human activities and the real dangers stemming from a warming planet (Briggs et al. 2015). Policymakers and the public now urgently need access to a set of indicators that convey the effects of human activities on GHG emissions and the consequent impacts on climate, our environment, and society. Building on prior work (see supplemental file S2), we present a suite of graphical vital signs of climate change over the last 40 years for human activities that can affect GHG emissions and change the climate (figure 1), as well as actual climatic impacts (figure 2). We use only relevant data sets that are clear, understandable, systematically collected for at least the last 5 years, and updated at least annually. [Sources and additional details about each variable are provided in supplemental file S2.] 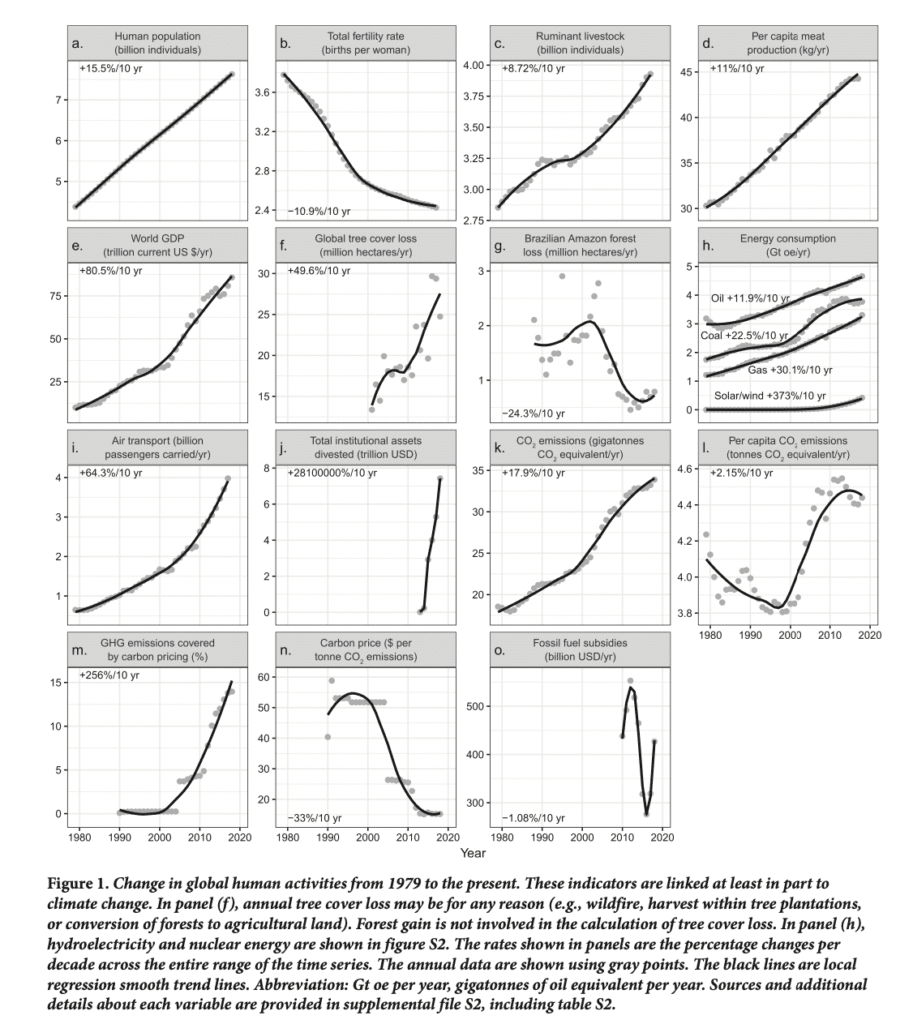 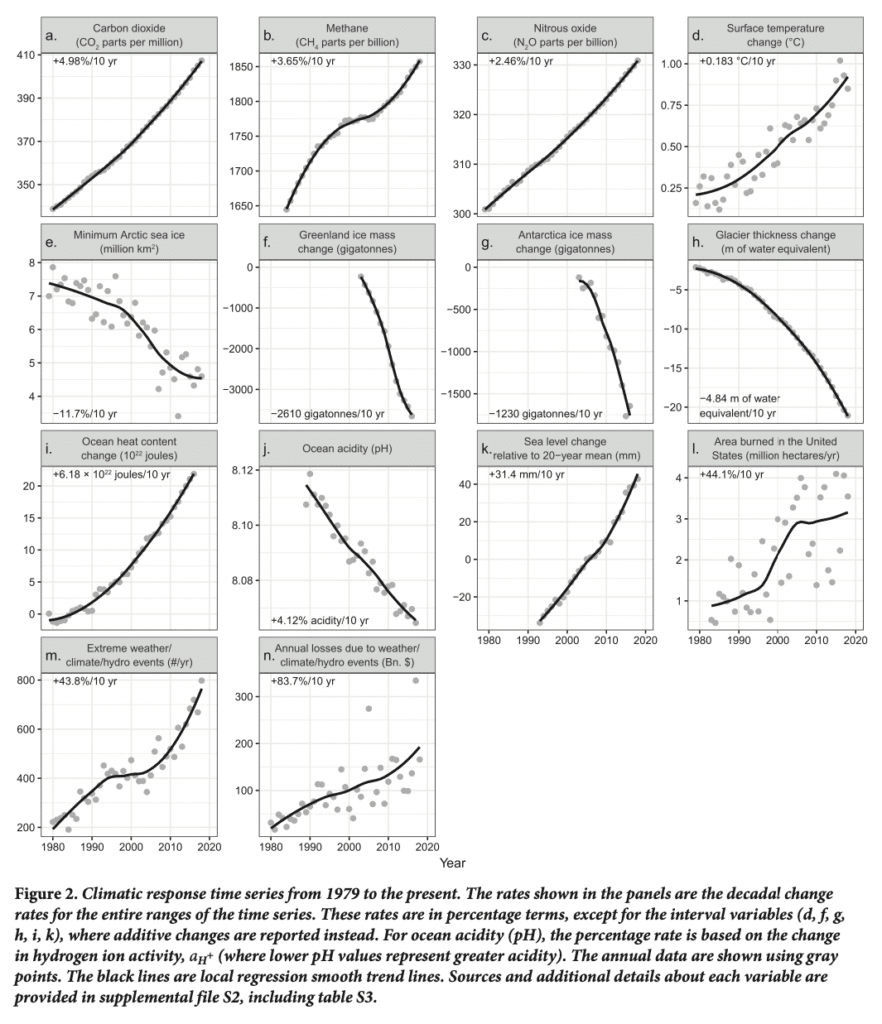 The climate crisis is closely linked to excessive consumption of the wealthy lifestyle. The most affluent countries are mainly responsible for the historical GHG emissions and generally have the greatest per capita emissions (table S1 [see Supplemental File S2]). In the present article, we show general patterns, mostly at the global scale, because there are many climate efforts that involve individual regions and countries. Our vital signs are designed to be useful to the public, policymakers, the business community, and those working to implement the Paris climate agreement, the United Nations’ Sustainable Development Goals, and the Aichi Biodiversity Targets.

Profoundly troubling signs from human activities include sustained increases in both human and ruminant livestock populations, per capita meat production, world gross domestic product, global tree cover loss, fossil fuel consumption, the number of air passengers carried, carbon dioxide (CO2) emissions, and per capita CO2 emissions since 2000 (figure 1, supplemental file S2). Encouraging signs include decreases in global fertility (birth) rates (figure 1b), decelerated forest loss in the Brazilian Amazon (figure 1g), increases in the consumption of solar and wind power (figure 1h), institutional fossil fuel divestment of more than US$7 trillion (figure 1j), and the proportion of GHG emissions covered by carbon pricing (figure 1m). However, the decline in human fertility rates has substantially slowed during the last 20 years (figure 1b), and the pace of forest loss in Brazil’s Amazon has now started to increase again (figure 1g). Consumption of solar and wind energy has increased 373% per decade, but in 2018, it was still 28 times smaller than fossil fuel consumption (combined gas, coal, oil; figure 1h). As of 2018, approximately 14.0% of global GHG emissions were covered by carbon pricing (figure 1m), but the global emissions-weighted average price per tonne of carbon dioxide was only around US$15.25 (figure 1n). A much higher carbon fee price is needed (IPCC 2018, section 2.5.2.1). Annual fossil fuel subsidies to energy companies have been fluctuating, and because of a recent spike, they were greater than US$400 billion in 2018 (figure 1o).

Despite 40 years of global climate negotiations, with few exceptions, we have generally conducted business as usual and have largely failed to address this predicament (figure 1). The climate crisis has arrived and is accelerating faster than most scientists expected (figure 2, IPCC 2018). It is more severe than anticipated, threatening natural ecosystems and the fate of humanity (IPCC 2019). Especially worrisome are potential irreversible climate tipping points and nature’s reinforcing feedbacks (atmospheric, marine, and terrestrial) that could lead to a catastrophic “hothouse Earth,” well beyond the control of humans (Steffen et al. 2018). These climate humanity can take to lessen the worst effects of climate change. These are important steps but are not the only actions needed or possible (Pachauri et al. 2014, IPCC 2018, 2019).

The world must quickly implement massive energy efficiency and conservation practices and must replace fossil fuels with low-carbon renewables (figure 1h) and other cleaner sources of energy if safe for people and the environment (figure S2). We should leave remaining stocks of fossil fuels in the ground (see the timelines in IPCC 2018) and should carefully pursue effective negative emissions using technology such as carbon extraction from the source and capture from the air and especially by enhancing natural systems (see “Nature” section). Wealthier countries need to support poorer nations in transitioning away from fossil fuels. We must swiftly eliminate subsidies for fossil fuels (figure 1o) and use effective and fair policies for steadily escalating carbon prices to restrain their use.

We need to promptly reduce the emissions of short-lived climate pollutants, including methane (figure 2b), black carbon (soot), and hydrofluorocarbons (HFCs). Doing this could slow climate feedback loops and potentially reduce the short-term warming trend by more than 50% over the next few decades while saving millions of lives and increasing crop yields due to reduced air pollution (Shindell et al. 2017). The 2016 Kigali amendment to phase down HFCs is welcomed.

We need to quickly curtail habitat and biodiversity loss (figure 1f–1g), protecting the remaining primary and intact forests, especially those with high carbon stores and other forests with the capacity to rapidly sequester carbon (proforestation), while increasing reforestation and afforestation where appropriate at enormous scales. Although available land may be limiting in places, up to a third of emissions reductions needed by 2030 for the Paris agreement (less than 2°C) could be obtained with these natural climate solutions (Griscom et al. 2017).

Excessive extraction of materials and overexploitation of ecosystems, driven by economic growth, must be quickly curtailed to maintain long-term sustainability of the biosphere. We need a carbon-free economy that explicitly addresses human dependence on the biosphere and policies that guide economic decisions accordingly. Our goals need to shift from GDP growth and the pursuit of affluence toward sustaining ecosystems and improving human well-being by prioritizing basic needs and reducing inequality.

Still increasing by roughly 80 million people per year, or more than 200,000 per day (figure 1a–b), the world population must be stabilized—and, ideally, gradually reduced—within a framework that ensures social integrity. There are proven and effective policies that strengthen human rights while lowering fertility rates and lessening the impacts of population growth on GHG emissions and biodiversity loss. These policies make family-planning services available to all people, remove barriers to their access and achieve full gender equity, including primary and secondary education as a global norm for all, especially girls and young women (Bongaarts and O’Neill 2018).

Mitigating and adapting to climate change while honoring the diversity of humans entails major transformations in the ways our global society functions and interacts with natural ecosystems. We are encouraged by a recent surge of concern. Governmental bodies are making climate emergency declarations. Schoolchildren are striking. Ecocide lawsuits are proceeding in the courts. Grassroots citizen movements are demanding change, and many countries, states and provinces, cities, and businesses are responding.

As the Alliance of World Scientists, we stand ready to assist decision-makers in a just transition to a sustainable and equitable future. We urge widespread use of vital signs, which will better allow policymakers, the private sector, and the public to understand the magnitude of this crisis, track progress, and realign priorities for alleviating climate change. The good news is that such transformative change, with social and economic justice for all, promises far greater human well-being than does business as usual. We believe that the prospects will be greatest if decision-makers and all of humanity promptly respond to this warning and declaration of a climate emergency and act to sustain life on planet Earth, our only home.