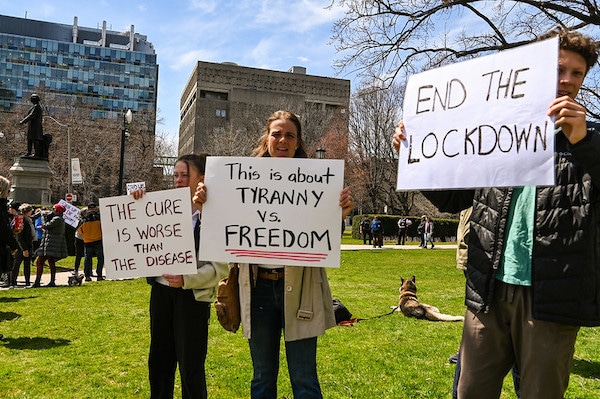 michael_swan Follow Lockdown Protesters An anti-lockdown protest at Queen’s Park April 25 attracted about 200 who claimed measures to control the spread of COVID-19 are an infringement of freedom.

Sarah Jones, in The Coronavirus Class War in New York Magazine, does a neat, tidy job of kneecapping the notion that the anti-lockdown protests are manned by workers who want to get back to their jobs so they can start making money again.

Let’s look at the upper end of the working stiff income spectrum, employees at top tech companies. Their bosses are keeping them well away from their glam campuses. From Big Tech was first to send workers home. Now it’s in no rush to bring them back, in the Washington Post:

Tech’s titans set the agenda for U.S. employers in early March, sending staff to work from home as the coronavirus started to spread near their West Coast headquarters….those same giants–Google, Facebook, Microsoft, Amazon and Twitter–will likely be among the last large employers to reopen their office doors and welcome staff back.

Google and Facebook told employees that many workers who can do their jobs remotely should plan to do so until 2021. Amazon said its headquarters employees will stay home at least until October. Microsoft told staff Monday that working from home remains optional through October for most employees, though the company will allow some workers to voluntarily return to their offices in stages…

“What we recognize is that economies are going to need to be opened gradually by turning a dial rather than flipping a switch,” [Microsoft president Brad] Smith said. “And as economies do that, I think we have a responsibility not only to adhere to the public health guidelines, but to be slower than others in bringing people back simply because we can.”

The declarations are a big shift for an industry that has for decades prided itself on work environments with communal cafeterias, volleyball courts and open office plans–all design features meant to foster collaboration and make long hours more bearable.

Those perks have also served as popular recruiting tools for the tech giants, helping them hire hundreds of thousands of employees across the West Coast. And benefits like free food, virtual golf and napping pods help the firms retain valued engineers, project managers and more, providing campuses designed to discourage workers from joining rivals.

In other words, employers who made going to the office a perk (IIRC Google has a gym and even masseurs at its headquarters) are keeping staffers at home. Do you think they’d be doing that if their staff were keen to come back?

More generally, polls not only show that citizens prefer to keep the lockdowns on longer, but that that desire is strengthens as wages levels drop. They can least afford to contract a potentially deadly ailment. We’ve followed Mike Elk of the Payday Report on strikes by front-line workers at Amazon warehouses and meatpacking plants, as well as by nurses over the lack of PPE. The risks are highest for work in crowded conditions, and those laborers have sorted out they aren’t being paid enough to risk their health.

Randy Narvaez had worked for a Denver-area King Sooper store for over 30 years by the time he died from the coronavirus. In a press release, his union, the United Food and Commercial Workers, said there are a dozen cases among his coworkers. Even if they all survive, they’ll see their pay reduced by the time they recover. King Sooper’s parent company, Kroger, ended a $2 “hero pay” bonus this week. Full-time workers will get another “thank you” payment of $400, part-timers get $200, and after that, it’s business as usual. Except it won’t be, not for Randy Narvaez and not for his coworkers, who are pleading with Kroger to extend the hourly bonus or at least shut their store down to clean it.

There’s an old conflict between employers like Kroger and workers like the UFCW’s members; it is far older, in fact, than COVID-19. A great difference in perspective, and thus of opinion, separates bosses from workers at all times….

…right-wing populists take one obvious, true point–that lockdown measures inflict economic pain….Consider a recent effort from Peggy Noonan, a Pulitzer Prize-winning columnist for the Wall Street Journal….“There is a class divide between those who are hard-line on lockdowns and those who are pushing back.” she ventured. A correct statement, though she doesn’t seem to know which side is which. In her version of class war, professional elites stand on one side of the divide, hectoring workers who just want to make rent. “The working-class people who are pushing back have had harder lives than those now determining their fate”…..

But reality doesn’t quite match up with Noonan’s imagination. Workers aren’t pushing back against lockdowns. They’ve organized protests of an entirely different variety. For weeks, they’ve rallied against elites, their bosses, who won’t clean their job sites or hand out enough masks and who take away hazard pay while they’re still dying. This isn’t left-wing sloganeering, but fact. Most Americans overwhelmingly back continued lockdown measures, even if they’ve lost major income during the pandemic. The polling is unambiguous. In April, Gallup reported that low-income adults were still more likely to fear illness from COVID-19 than financial hardship, which by then had already become acute. Later the same month, an IPSOS poll found that high-income households in 14 countries surveyed, including the U.S., were mostly likely on average to support economic re-opening. The poorer a household, the less likely a respondent was to agree that states should re-open.

Now you might then say, “But what about those protestors?” First, there’s a weird tendency among the chattering classes to view all Trump fans as poor white trash, resentful of their educated blue city latte-drinking, well-traveled betters. In fact, the average income of Trump voters in 2016 was more than $10,000 higher than that of Clinton voters. And no, Trump didn’t get more lower-income conservatives to turn out either; the percentage of Republican voters making less than $50,000 was lower than in 2012.

While it isn’t decisive evidence, the fact that many protestors drove long distances isn’t consistent with financial distress. From the Guardian:

Cellphone location data suggests that demonstrators at anti-lockdown protests–some of which have been connected with COVID-19 cases–are often traveling hundreds of miles to events, returning to all parts of their states, and even crossing into neighboring ones.

If you are part of that nearly half of America with less than $400 for an emergency, and you’ve already had weeks of no or diminished income, spending a tank of gas or more on driving, even with gas now cheap, is taking, to paraphrase the immortal George Bush, food off your family.

Lambert speculated in 2016 that an important slice of Trump backers were local notables: the successful business man who owned Taco Bell franchises, or a couple of car dealerships, or was a homebuilder, or had inherited oil and gas properties. That cohort would be hurting (relatively speaking) under the lockdowns, particularly if they’d borrowed money to finance their businesses.

Jones in her New York Magazine piece comes very close to speaking a crass truth, that another motivation for wanting the lockdowns over among well-off suburbanites is wanted to be served. I’ve heard women pining for a manicure and a haircut. I cringe when they maintain that the workers at those salons want them back, when employees are at best likely to feel ambivalent given the health hazard.

And workers on other front lines, namely teachers, who in New York City forced the closure of public schools, object to messaging on the necessity of reopening:

"Every week that goes by that children miss out on education, is a week causing real long term damage."
That is nonsense. And I say that with 42 years experience in teaching. This is a conservative narrative.

Finally, police abroad haven’t been shy about dealing with the anti-lockdown protestors the way they deal with other types of protestors, although admittedly there are some complicating factors here in the U.S. Specifically, in the case of Michigan, individuals are allowed to carry guns into the statehouse. And even though anti-lockdown advocated plenty of violent exhortations on social media, that does not establish that the particularly people who would show up had personally made threats. The governor and police might have regarded it as legally too fraught to try to document threats in real time and single out and arrest particular perps (admittedly, the police seldom have compunctions about rounding everyone up, but here the other side clearly has funding to make for a protracted court battle).

But by way of contrast:

And you know what the police are doing? Arresting people.

Not a single person showed up to either of the anti-lockdown protests planned in Aberdeen today. https://t.co/7WdGPdiYQM

There are many times when we are very proud to come from #Leeds. This is one of them. Far right virus-denying protestors had planned to flout lockdown rules by holding mass protests in Leeds parks today. This was the result… pic.twitter.com/d2v6H1B8oc

Despite lifting the lockdown in France, French police is cracking down hard on protests.

In Lyon, Yellow Vests wanted to return to the streets to protest against the neoliberal government and its disastrous health policy, but protesters were met with harsh repression. pic.twitter.com/t8i53wBR8D

How much would infection and death rates have to rise to stiffen officials’ spines? And if that doesn’t happen until, say, November, when the holiday entertainment and shopping season is about to start, how much willingness will there be to clamp down?