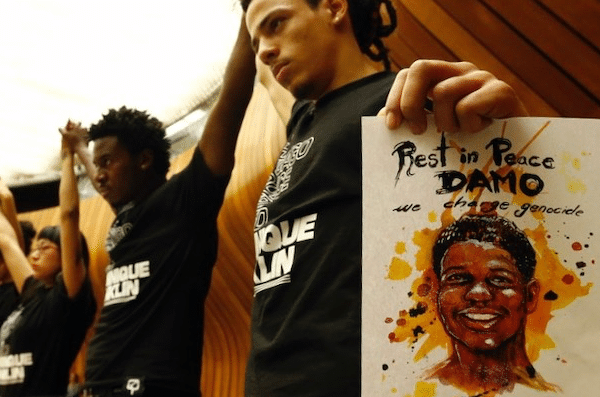 The idea of human rights is premised on the position that human beings come into society with the expectation that the society they are born into will recognize their inherent dignity. That assumption is supposed to be reflected in social relations, laws and practices that allow for the individual to realize their inherent dignity.  This understanding was the foundation for the liberal conception of individual human rights which emerged as part of the ideological weaponry of the rising bourgeoisie in Europe and in its colonies in the 18thcentury.

Liberal bourgeois rights were individual and supposedly natural, stemming from the notion of natural law, and therefore, inalienable. A just state was, therefore, viewed as one in which individual rights were recognized and respected.

The problematic here is obvious.

The liberal bourgeois revolution emerged while Europe was still involved in a violent assault on the peoples of the Americas and an inhumane trade in human beings and their super-exploitation. One might assume that this might pose a moral and philosophical dilemma, but it did not.

The contradiction of asserting the inherent dignity and value of the human with inalienable rights while simultaneously committing genocide, raping, murdering and enslaving millions simply required a categorical conversion in relationship to those human beings.  Stated simply, those human beings were assigned to the category of the non-human.

Over time–and Europeans point to this as an example of their evolved thought–some of the colonized were allowed to achieve the status of associated humans. This “enlightened” position stemmed from the needs of the colonial project for low-level functionaries, as well as natives who would serve as buffers and legitimizers of colonial rule.

This is the basis for the global neocolonial rule by Europe and the quest for a more perfect union in the United States where Black people and other colonized peoples can aspire to become fully human, measured by the degree to which they have assimilated “white” cultural standards and have “pledged allegiance” to the settler project.

With this truncated view of human rights, the U.S. settler state scalped, murdered, burned, raped, shot, conquered and enslaved across the land mass that became the United States, with impunity and moral justification granted by a God-given manifest destiny.

The U.S. Settler State and the Contradictions of Liberal Human Rights

The modern conception of human rights emerged out of the carnage of the second imperialist war, popularly known as World-War II. The modern human rights framework was a product of the growing cold-war between the two victorious blocks: the Soviet bloc, largely responsible for defeating Nazi Germany, and the Western bloc under the control of the U.S., whose late entry into the two-front war in Europe allowed it to emerge as the predominant power occupying most of Western Europe.

As a result of the intensifying struggle between those two blocs, and the demands from the public and the colonized world — who took seriously the rhetoric contained in the Atlantic Charter issued during the war by Western allied forces, which condemned the forceful usurpation of lands and declared that the right to self-determination was a fundamental right —the meaning and scope of human rights became a contested area of struggle.

Black activists from the U.S. saw in the developing human rights idea a strategic opportunity to press the international community to take up the interrelated issues of racial oppression and colonialism. The organized agitation of Black activists and petitions to the newly created United Nations from the National Negro Congress (NNC), National Association for the Advancement of Colored People (NAACP), and Civil Rights Congress (CRC) with its famous document “We Charge Genocide,” had a major impact on the development and evolution of the human rights framework.

But the U.S. led the charge to curtail the scope and content of human rights. It advocated for and won the battle to bifurcate human rights into “civil and political rights,” and “Economic, social and cultural rights” (ESCR).  It also ensured that the first human rights document produced by the UN Human Rights Commission under the leadership of Elenore Roosevelt would be a mere declaration of principles without any legally binding obligations so as to placate Southern U.S. Senators who were afraid of the possible intervention of this body to address the U.S. apartheid system.

Real human rights, according to the U.S. and Western European powers, were civil and political with economic, social and cultural rights–like the right to healthcare, housing, food, education, leisure and the practice of one’s language and culture — being merely aspirational. Consequently, the breakdown between the two approaches was between the West and civil and political rights and the East that championed collective ESCR’s.

Even in the field of civil and political rights that was recognized by the West, the record of abuse if horrific.

With the white national reconciliation ushered by the Hayes Tilden compromise that ended reconstruction after the civil war, racial terrorism and apartheid fascism in the Southern states was introduced and legally codified in the Plessy v Ferguson case of 1896.

Repression was not limited to the Black population. The bloody march of conquest across the country was completed by the end of the 19th century. For the millions of immigrant settlers, many of whom brought strange ideas of freedom that included a commitment to socialism, the state responded with legislation to strengthen the power of the state to curtail any “subversive” thought or activity.

The curtailment of civil and political rights was reflected in legislations like the Espionage Act of 1917, Sedition Act of 1918, Smith Act of 1940 and the McCarren Act of 1950.

The post-second-world-war response to the Black anti-colonial, democratic and human rights struggle was to unleash the national security state, especially during the 1960s. From the FBI’s CONITELPO to the  Anti-Terrorism and Effective Death Penalty Act (1996), the USA Patriot Act (2001), and the National Defense Authorization Act Section 1021 (2012) during the Obama regime, which authorized indefinite detentions and implicit support to extrajudicial executions of U.S. citizens by the Executive, the U.S. state has not hesitated in strengthening its repressive capacities.

President Obama shut down the occupy movement, expanded mass surveillance, assassinated U.S. citizens, including a 16 year-old, expanded the DOD 1033 program responsible for militarizing the nation’s police forces by 2,400%, and characterized the resisters in Baltimore, who took to the streets after the Freddy Gray murder, as thugs and criminals.

This is the foundation upon which Trump is building: a bipartisan, systematic failure to protect the human rights that are supposed to be the cornerstone of the liberal project.

What this means is that if human rights are to have any value for the oppressed, they must be liberated from the liberal project, reconnected with economic, social and cultural rights, and grounded in the radical people(s)-centered human rights framework that takes the position that without authentic democracy and socialism, human rights are worthless.

Ajamu Baraka is the national organizer of the Black Alliance for Peace and was the 2016 candidate for vice president on the Green Party ticket. Baraka serves on the Executive Committee of the U.S. Peace Council and leadership body of the United National Anti-War Coalition (UNAC). He is an editor and contributing columnist for the Black Agenda Report and contributing columnist for Counterpunch. He was recently awarded the U.S. Peace Memorial 2019 Peace Prize and the Serena Shirm award for uncompromised integrity in journalism.
View all posts by Ajamu Baraka →

Jade, For Hire! – “The Case of the Wrinkled Egg“
When the powers that be are in contempt of the people