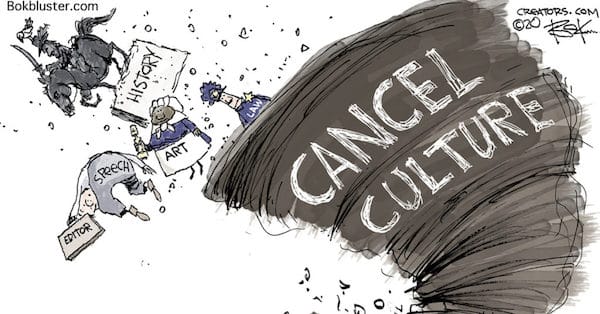 Fox News‘ Tucker Carlson, who makes a living talking about how terrible the left’s ideas are, has a sideline complaining about the left’s intolerance to ideas they disagree with.

The Republican National Convention this year made fighting “cancel culture” a priority for the party. Former Republican Sen. Orrin Hatch wrote in the Wall Street Journal (7/27/20) that cancel culture was at the heart of the crisis facing academic freedom in the nation. Other right-wing activists noted the same in the Washington Times (8/10/20), and Fox News hosts like Tucker Carlson (Real Clear Politics, 7/3/20) talk about the issue constantly.

The message is that cancel culture is a lurking threat against any professor or writer. Make one transphobic comment, a slightly sexist joke, a perceived slight against an oppressed group, and you could see dozens, hundreds or thousands of Twitter social justice activists rally for your termination of employment. This is the new McCarthyism, say cancel culture critics: A mob of politically correct warriors can suppress conservative speech by using the power of internet outrage to enforce liberal-defined speech codes on race, gender, etc. At any minute, you—especially if you are a white, heterosexual, cisgender man—are just one slip-up away from getting, well, canceled. 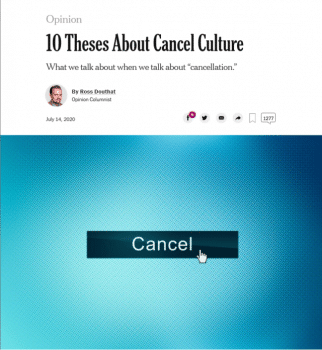 “Is it cancel culture when conservatives try to get college professors disciplined for anti-Americanism, or critics of Israel de-platformed for antisemitism?” asked Ross Douthat (New York Times, 10/14/20). “Sure, in a sense.”

Fear that tone-policing liberals will squelch free inquiry on campus and elsewhere isn’t new (FAIR.org, 5–6/91). Academic Paul Berman’s  Debating PC and late Village Voice journalist Nat Hentoff’s Free Speech for Me—but Not for Thee explored these topics in 1995 and 1992, respectively. But today’s moral panic in response to collegiate liberalism and the online commentariat has reached a point that the president of the United States has felt moved to make combating this social plague a part of his re-election campaign (USA Today, 9/3/20).

Opposition to cancel culture has created its own media industry. Tory broadcaster Piers Morgan has a new book on the subject. Judy Gold (Jewish Insider, 7/28/20) and Adam Carolla (The Hill, 11/20/19) are among the many comics who have built shticks on attacking the sensitivities of liberal culture. There is even a podcast, Blocked and Reported, devoted entirely to reviewing instances of online censoriousness.

But who, in fact, is being “canceled” at universities (FAIR.org, 6/15/17)? Steven Salaita, whose pro-Palestine comments were perceived as insensitive to Jews (e.g., “If it’s ‘antisemitic’ to deplore colonization, land theft and child murder, then what choice does any person of conscience have?”—Twitter, 7/19/14), lost his job offer at the University of Illinois in 2015. Political theorist George Ciccariello-Maher, an outspoken activist against white supremacy, was forced out of his tenured position at Drexel University in 2018 after his Twitter post mocking the ludicrous notion of “white genocide” was misconstrued as anti-white racism. Most recently, Zoom, now the ubiquitous application used for holding remote meetings and forums, in September 2020 canceled the airing of a talk at San Francisco State University by Leila Khaled, whose affiliation with the Popular Front for the Liberation of Palestine rankled pro-Israel groups.

In 2018, several groups wrote to nearly 300 universities demanding free speech protections for campus communities, which, activists said, were under attack by outside pro-Israel groups—their letter insisted that administrations condemn the

Canary Mission, the David Horowitz Freedom Center and other groups that use defamatory intimidation and blacklisting tactics, including those that chill advocacy for Palestinian rights on campus.

Thousands of conservative activists in December 2016 pressed Hunter College to fire urban policy professor Matthew Lasner because his husband was allegedly mean to Ivanka Trump, the daughter of the then-president-elect, on an airplane. Harvard law professor Alan Dershowitz, one of the Trump administration’s biggest cheerleaders in academia, was instrumental in forcing DePaul University to oust political scientist Norman Finkelstein, a critic of Israel (and Dershowitz), in 2007.

Yet this isn’t exactly what the anti-cancel culture zealots are referring to. Bari Weiss, a former conservative opinion editor for the New York Times and one of the signers of the Harper’s statement, had fought against professors deemed too critical of Israel. Another signer, Cary Nelson, had backed the cancellation of Salaita.

It’s not hypocrisy. It’s something worse.

First, if we’re to assume that academics and journalists are at risk of losing their jobs over their controversial opinions, that is because there is a lack of due process and union protections for these workers. If we’re to protect these workers from the threat of termination, the answer isn’t to tell Twitter activists to self-censor every time they see something offensive, but to end the precarity that comes with at-will employment in media and at universities. But we don’t hear too much about this from anti-cancel culture warriors—although the unionized workers at the New Yorker ended at-will employment there, winning a “just cause” provision in their collective bargaining agreement (CNN, 8/5/20). 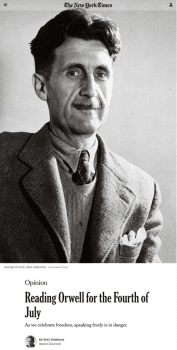 “People who cannot speak freely will not be able to think clearly,” wrote Bret Stephens (New York Times, 7/3/20), who alerted a university provost that one of their professors had joked that Stephens was a “bedbug.”

Accusing your enemy of doing what you’re doing—in this case, right-wing organizations canceling left-wing academics, and then claiming liberals are perpetrating cancel culture—is a form of deflection that riles the right-wing base against intellectuals, but also sends the coded message that the Republican Party will do what it can to silence left-wing critics.

Here’s an illustration: New York Times conservative columnist Bret Stephens (7/3/20) wrote that the biggest threat to free speech are liberals who seek to curb the expression of those who don’t endorse social justice liberalism. But Stephens had complained to George Washington University professor David Karpf—and, crucially, cc’d the GWU provost—after Karpf joked on Twitter that Stephens was a “bedbug.” Karpf (LA Times, 8/28/19) wrote:

That isn’t a call for polite, civil, rational discourse. It’s an exercise of power. He wanted me and my employer to realize that I had offended an important voice at the paper of record.

Stephens is the cancel culture warrior, not the victim. The message Stephens sent, quite clearly, is that cancel culture is against free speech when social liberals are too vocal about their objections to old hierarchies and the status quo, but it is a perfectly acceptable tool for conservatives to use against the left or critics of conservatism.

This isn’t the only time the right situates itself as the victim when it is actually the offender. Think, for example, about how the far-right spoke about the fear of “jack-booted government thugs” coming to put Christian Americans into FEMA camps in the 1990s. When the Trump administration deployed federal agents to throw Black Lives Matter protesters into unmarked vans, or when federal law enforcement put migrant children into what may fairly be called concentration camps, it’s easy to see hypocrisy on the part of the right-wingers who protested federal police at Ruby Ridge or Waco, but embrace them when used against immigrants or BLM.

But rather than hypocrisy, those fears were a statement of intent. The right’s fear of what could be done to them was an expression of what it hoped to do unto others.

Right-wing hysteria about cancel culture is similar. The Trump administration, the Republican Party and right-wing media (propped up by mainstream media) are telling their base: Yes, we will make liberal professors scared, we will get them fired and use “cancel culture” to suppress speech and academic inquiry we find distasteful or dangerous. Think of it as a declaration of a cultural counter-revolution.

Media should be more honest about this as this subject continues to bubble up.