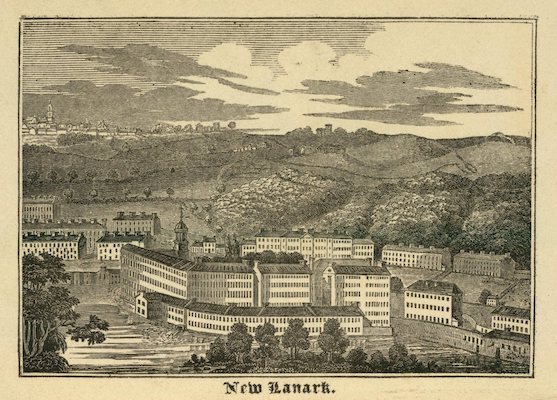 The third major influence on Marx’s critique of political economy (in addition to and combined with classical economics and Hegel’s philosophy) was utopian socialism.

During the early to mid-nineteenth century, socialist ideas were sweeping across Western Europe—starting in France and Britain—and traveling from there to many other parts of the world. They provoked extensive discussions and debates, a wide variety of plans to ameliorate the ravages of capitalism and to replace it with something better, and not a few attempts to create a radically different economic and social order.

The idea of utopia can be traced back to to the sixteenth century, to Thomas More’s famous text of that name. But socialist versions of utopia came much later, in response to the frustrated promises of the French Revolution. The crises of the Ancien Régime, caused by obscene levels of social and economic inequality, provoked a demand for liberty, equality, and fraternity. But for all the upheaval in France—the breaking-up of the feudal order (including the stripping-away of the privileges of nobility and the breakup of large Church-owned estates) and the creation of radically new social and political institutions (such as the institution of universal [male] suffrage and the abolition of slavery in the colonies)—the revolutionary measures and the subsequent restoration of private property and much else served to clear the way for capitalism and thus new forms of inequality.

Socialist ideas sprung up in response, inspired both by the utopian promises and by the failures in practice of the Revolution. The most daring and influential utopian socialists of the time were, in France, Henri de Saint-Simon and Charles Fourier, and, in Britain, Robert Owen.

Saint-Simon claimed that the needs of the industrial class, which he also referred to as the working-class, needed to be recognized and fulfilled to have an effective society and an efficient economy.* He argued, in consequence, that the direction of society should be in the hands of scientists and engineers (not the “idling class,” who produce nothing but live off the labor of others), in order to allow for the rapid development of technology and industry (Industry, which appeared in 1816-17), and that religion “should guide the community toward the great aim of improving as quickly as possible the conditions of the poorest class” (The New Christianity, published in 1825).

Fourier, for his part, presented a more radical critique of the existing order and plan for creating a new kind of economic and social organization. Not only did he attack poverty as one of the principal disorders of society (which could be solved by raising wages and providing a basic income for those who could not work), he argued that labor itself (indeed, all creative endeavors) could be transformed into pleasurable activities (see especially Le nouveau monde industriel et sociétaire, ou Invention du procédé d’industrie attrayante et naturelle distribuée en séries passionnées [“The New Industrial World”], originally published in 1829).** The primary mechanism for this would be the formation of “phalanxes” (based upon buildings called phalanstères or grand hotels) that would encourage the cooperation of different kinds of labor (based on jobs chosen according to the interests and desires of their members), which would both raise productivity and create social harmony.

In Britain, it was Robert Owen who became best known for attacking the deplorable conditions in which factory workers lived and labored—blaming the conditions, not on workers themselves, for their plight. He then sought to change those conditions: first, in the New Lanark Mills in Scotland, which he owned and managed and where he improved working conditions as well as providing youth education and child care; and then on a much larger scale, as an avowed socialist (A New View of Society: Or, Essays on the Formation of Human Character Preparatory to the Development of a Plan for Gradually Ameliorating the Condition of Mankind, published in 1816), Owen advocated radical social reform (such as the formation of trade unions and the provision of free education for children) and proposed a model for the organization of self-sufficient communities to serve as the basis for a “new moral world” (which was also the name of a newspaper he started in 1834, which carried the subtitle “A London Weekly Publication. Developing the Principles of the Rational System of Society”).

During the first half of the nineteenth century, when Marx was developing and then extending into new areas his “ruthless criticism of everything existing,” and beginning his lifelong collaboration with Engels, these were the socialist ideas that were “in the air,” discussed and debated by a wide variety of thinkers and activists (socialism also became, then as now, the pejorative epithet that was attributed to any criticisms and suggestions for economic and social change their opponents wanted to stop).

They weren’t just critical ideas and lofty plans. The utopian socialists and their followers also sought to go beyond writing books and giving speeches by creating communities based on those ideas. This was particularly true in the United States, where more than 30 Fourierist phalanxes were established in the 1840s (two of the most famous being Brook Farm, in Massachusetts, and the Wisconsin Phalanx, in Ceresco). Owen himself financed and founded the community of New Harmony, in Indiana, based on his principles (where the Working Men’s Institute, Indiana’s oldest continuously operating public library, still exists).***

Eventually, as we will see in a later chapter, Marx and Engels developed a critique of the ideas put forward by the utopian socialists. But they also expressed a great deal of admiration for these initial socialist thinkers, and were certainly influenced by them during their steps toward the development of a critique of both mainstream economic theory and capitalism.

*To be clear, Saint-Simon’s definition of the working-class was not restricted to the contemporary meaning (according to which it consists of blue-collar workers or those without a college education), much less the Marxist notion (which will analyzed in detail in a later chapter), but included all people he considered to be engaged in productive work that contributed to society, such as industrialists, managers, scientists, and bankers, along with manual and skilled laborers.

**Fourier also criticized the repressive family structure, in which men treated their spouses as if they owned them and worked only for them and children had little freedom to express their deepest sentiments. He believed that humans should create more equitable relationships between the sexes and that equality could exist only if people were freed from the constraints of marriage. He thus advocated free love and the collective raising of children within the community.

***Hundreds of other “intentional communities,” many of them short-lived, proliferated during this time, especially in the United States (but also as far flung as Australia, where Herrnhut was founded in 1855). Only some of them were directly inspired by utopian socialism. The others often looked to religious leaders and principles of community for inspiration.