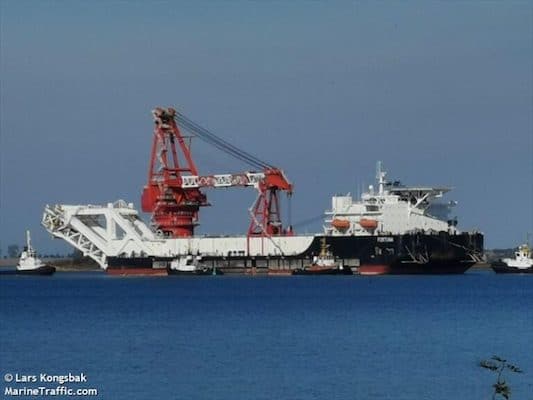 Exactly a week after the announcement on December 30 regarding European Union’s long-sought comprehensive investment agreement with China, the Danish Energy Agency received an innocuous revised schedule from Nord Stream 2 AG for the construction of the gas pipeline in the kingdom’s exclusive economic zone. The DEA was notified that “Work on laying the pipeline is scheduled to resume in Danish waters on January 15.”

Accordingly, Russia’s pipelay crane vessel Fortuna, which completed the construction of a 2.6 km section of the gas pipeline in the exclusive economic zone of Germany at the end of December, is moving into the Danish waters. To date, 94% of Nord Stream 2 has been finished.

Meanwhile, two other developments have taken place alongside. The Czech Republic has announced that the so-called EUGAL highway, the ground extension of Nord Stream 2 from the border with German Saxony and ends in the west at a gas distribution centre next to the border with German Bavaria has been completed. The 150-km link costing 540 million euros will bring Russian gas to Austria via EUGAL highway.

Again, on January 6, it was disclosed that the regional government in the northern German lander of  Mecklenburg-Vorpommern (where Chancellor Angela Merkel’s CDU is in power) is setting up a special “Foundation for climate and environment protection” which would also also “contribute” to the completion of of the Nord Stream 2 project by acquiring and storing equipment and materials needed for the pipeline’s construction, which could thereby shield the firms from punitive measures threatened by Washington. (Mecklenburg-Vorpommern is the landing point for the undersea pipeline from Russia.)

The political message in all this is clear. On January 4, Foreign Minister Heiko Maas told the news agency Deutsche Presse-Agentur DPA that Berlin will not yield to pressure from Washington in their dispute over Nord Stream 2 even after the transfer of power in the U.S. in January.

Maas underscored that Berlin “does not need to talk about European sovereignty if that is understood as us (Germany) doing everything in future the way Washington wants.” Maas added that although Berlin hopes for an improvement in U.S.-German ties under Biden, a spate of bones of contention, including the Nord Stream 2 issue, will remain. “The German government will not change its stance on Nord Stream 2,” he pointed out, adding,

the important thing is that we are aligned on the central strategic and geopolitical issues, where we are on the same side of the field.

There is strong support from the German industry as well as across the political spectrum that Nord Stream 2 project is important as a means to guarantee Berlin’s energy security amid the country’s phase-out of nuclear and coal power. The prominent German MP Waldemar Herdt from the right-wing populist Alternative for Germany (AfD) spoke up last week:

Whatever the situation is in America, one thing unites them all–a huge unwillingness to see constructive and business-like development of relations between Russia and Germany.

The U.S. interference in German-Russian relations is a long-standing phenomenon. Declassified archival materials of the former West German government show that Bonn visualised long-term energy diplomacy to be a carefully built link with the former Soviet Union, guaranteeing  cooperation even during political crises. No doubt, energy diplomacy had catalysed Willy Brandt’s Ostpolitik.

In particular, natural gas pipelines required mutual trust within a stable relationship, which inevitably would lead to further collaborations in other areas. Archival documents reveal that the Soviet era pipeline to Europe increased the cooperation between Bonn and Moscow, although it strained West Germany’s relationship with the United States.

The politics of Nord Stream 2 is at once obvious. It has three templates. First, Merkel is sticking out here neck at the very fag-end of her political career when the poisoning of Russian opposition activist Alexei Navalny with a nerve agent, which Germany believes the Kremlin was likely behind, is still a hot topic. Merkel holds on to the belief that engaging with Russia is the only way to avoid a complete breakdown in relations.

The Navalny poisoning is just the latest in a series of incidents, from the 2015 hacking of the German parliament’s computer system to the assassination of a Chechen rebel in Berlin last year, that Germany puts at Russia’s door. Pressure has been building on Merkel from within her own party and the opposition–and some EU countries and the U.S.–to either put a moratorium on Nord Stream 2 or cancel it altogether in order to send a clear signal to Russian President Vladimir Putin that he crossed a red line.

Nonetheless, Merkel has decided against canceling Nord Stream 2. Moscow, which has been hyping up anti-German rhetoric lately, has been put to shame.

Second, both the EU-China investment agreement and the Nord Stream 2 saga bring to mind what the French Foreign Minister Yves Le Drian had told Europe1 Radio in an interview on November 7 that the EU and the U.S. would not return to the previous close relationship they enjoyed prior to Donald Trump’s presidency even with Democratic presidential nominee Joe Biden in the White House.

We will not return to the status quo ante, to the good old days of the trans-Atlantic relationship. The world has moved on after these four years. Europe has emerged from its naïveté. It is beginning to assert itself as a power.

To be sure, Biden presidency will be a drastic relief for European officials who have struggled to maintain good relations with Washington over the past four years, which sent the ties to an unprecedented low level. Biden has an extensive network of contacts across Europe from his eight years in Obama’s administration. Everybody knows him. The European officials feel relived that have an adult relationship again with people speaking with each other, rather than past each other.

Having said that, Europeans cannot afford to blithely assume that things cannot turn around in 2024. Besides, as Ines Pohl, Deutsche Welle’s Washington Bureau Chief, wrote recently, “we will see a Biden administration working hard to re-establish a sense of stability. Yet Biden’s administration will govern a polarised country, struggling with severe economic problems that further deepen these divisions.

We will see the U.S. consumed by domestic power struggles for years, even decades, gradually abandoning multilateral politics, especially in Europe. This trend will continue regardless of which party controls the White House. And this is a stark reality that Europe and Germany must acknowledge.

A fortnight after Pohl wrote, the Capitol riots corroborate her prognosis. Germany and France will not hitch wagons with the Biden Administration on any confrontation with Russia. The likelihood of them joining the U.S.’ “Indo-Pacific strategy” to contain China is even less.

This does not preclude, however, a substantive global “to-do” list that awaits the EU leaders and Biden to work fruitfully–elevation of diplomacy as the U.S.’ principal tool of foreign policy, renewed commitment to multilateralism and specific assurances on NATO and the UN, re-entry to the Paris Climate Agreement and Iran nuclear accord, reengaging World Trade Organization and World Health Organization, a global democracy summit, push back against authoritarianism and corruption, advancing human rights and so on. These are all matters of great importance to Europe.