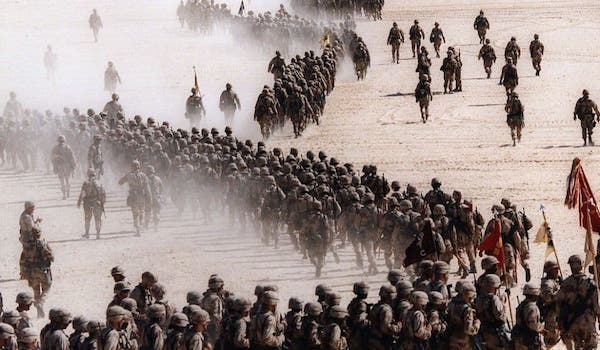 Monday marks the 30th anniversary of Operation Desert Storm, when American-led coalition forces invaded Iraq. The Gulf War sparked 30 years of chaos and turmoil in the once powerful Middle Eastern country but also served as a rude awakening for China’s military leaders.

With the technology and firepower on show during the conflict–precision bombing, satellite guidance, missile interception, air-to-surface strike to eliminate tanks, electronic warfare, one-way transparency on the battlefield, stealth bombers–the Gulf War was a “psychological nuclear attack” on China, observers say.

The event helped to kick start China’s military modernization and led to the People’s Liberation Army (PLA) narrowing the gap with the U.S. military so much that it is now considered a “strategic threat”.

Desert Storm, which lasted six weeks, marked the dawn of a warfare revolution, showed the backwardness of the PLA at that time and sparked anxiety regarding national security, experts say.

“It showed China how a war should be fought and forced the Chinese military to skip the mechanised stage and jump straight to develop information technologies,” said Ni Lexiong, a Shanghai-based military expert.

From military theories to the building of the army, to the weapons and equipment, to the relevant technologies, we realised it was all decades behind the Americans.

Antony Wong Tong, a Macau-based military analyst, said old PLA doctrines like “People’s war” were proven outdated by the Gulf War, and showed that after June 4, 1989–the date of the bloody massacre in Tiananmen Square–China had once again become an imaginary enemy of the US, which made the problem more imminent for Beijing.

“Since the 1990s the PLA has thoroughly switched to the path of professionalisation and modernisation,” he said.

The year 1991 saw the dissolution of the Soviet Union and the end of the Cold War, and the military and political pressure on China dramatically increased. Aware of its own vulnerability and weakness, China adopted a “keeping a low profile and biding time” approach to diplomacy, while putting all of its effort into development.

In the aftershock of the Gulf War, then Chinese leader Jiang Zemin began to promote the idea that the PLA should focus on building “modern regional warfare capabilities under hi-tech conditions”, “complete the dual historical tasks of mechanisation and informationisation” and “achieve the modernisation of the army by leaps forward”, according to Tang Zhichao, who specialises in Middle East studies at the Chinese Academy of Social Sciences.

According to Hong Kong-based military commentator Song Zhongping, China used the hi-tech American weapons it had seen in the war–like precision missiles, missile defence systems and stealth warplanes–as a guidebook for its development. Tactics like joint operations between different forces and the organisation and technologies needed to realise them were also given great attention.

Retired PLA major general Jin Yinan spoke of the impact the war had had in his memoir.

At one point, we translated a lot of the U.S. military’s operational regulations and military reports, and began to build the army by copying their models and standards.

The military’s budget started rising fast in 1999 with double-digit growth for more than a decade, in line with the soaring Chinese economy. By 2019, China’s annual defence spending was the second-biggest in the world, reaching US$176 billion, compared to America’s US$732 billion. Beijing allocated a budget of US$178.6 billion for 2020.

The Chinese army last year announced the completion of the mechanisation of its Ground Force. But even before then the PLA was ahead of the U.S. in some areas, like shipbuilding, land-based conventional missiles and integrated air defence systems, according to the Pentagon’s 2020 “China Military Power Report”.

The PLA Navy is the world’s second largest after the U.S. by total displacement. It has about 350 ships and submarines, including more than 130 major surface combatants. The U.S. Navy has 293 ships. Moreover, most of China’s best ships were built after 2010 so feature the latest equipment and technologies.

By comparison, in 1991, the PLA Navy was a near-shore defence force whose largest ship was a 3,600-tonne destroyer Type 051.

The PLA Air Force is now the third-largest in the world, with more than 2,500 aircraft and about 2,000 combat aircraft, most of which are third- and fourth-generation warplanes, comparable to Western air forces. China is only the second country in the world to have developed a fifth-generation stealth fighter, the J-20.

In 1991, the best planes in the PLA Air Force were the J-7–developed from a 1950s’s MiG-21–and the domestically developed J-8, both of which were second-generation. The U.S. aircraft involved in the Gulf War were mostly fourth-generation F15s, F-16s and F/A-18s, while the military decided Lockheed Martin’s prototype Y-22 would become the world’s first fifth-generation stealth fighter–the F-22.

The PLA Rocket Force has more than 1,250 ground-launched ballistic and cruise missiles with ranges from 500km (310 miles) to 5,500km, which the U.S. almost did not have due to the Intermediate-Range Nuclear Forces Treaty. The Rocket Force has greatly upgraded and expanded its nuclear-capable intercontinental ballistic missile inventory in the past 30 years and now leads the world in the deployment of hypersonic glide missiles with its DF-17.

“Chinese equipment may not be as good as the Americans in certain specifications, but at least it is of the same generation of development. There is no longer the generational gap there was in the 1990s,” Ni said.

Although China’s state television did not broadcast live reports on Desert Storm, it was still closely watched.

“Like myself, the prediction of most military personnel in China at the beginning of the war was that the United States would repeat the Soviet Union’s failure in Afghanistan,” said Liu Dingping, an officer with the PLA Second Artillery Command (now the Rocket Force) wrote in a newspaper article at the time.

But… we were wrong.

The U.S.-led coalition flew more than 100,000 sorties and dropped 88,500 tonnes of bombs, which stripped Iraq of its defences. The fact it took the coalition just 42 days–including just 100 hours on the ground–to wipe out what was at the time the world’s fourth-largest army was telling, experts say.

“If it was us being attacked by the Americans at that time, the result might not have been any better,” said Ni, who was a 36-year-old military history researcher in 1991.

But the U.S. had the world’s first operational stealth warplane–the F-117, and fourth-generation fighters, the F-15, F-16 and F/A-18, as the backbone of its air campaign. Moreover, the squadrons of reconnaissance, surveillance, electronic-warfare, aerial refuelling tanker aircraft were total strangers to the Chinese.

Wong said the PLA had never imagined that the coalition would be able to win with almost nothing but air power.

“It was as shocking as a psychological atomic bomb on the Chinese military, who still believed in Soviet-style tactics from the 1960s and 1970s,” he said.

Wang Yiwei, a professor of international relations at Renmin University of China in Beijing, said the conflict reminded the Chinese of the rule of the jungle: “fall behind and you will be beaten”.

“China also learned from the Gulf War that the U.S. had established its dominance and hegemony through military might. The U.S. could beat you whenever they want to,” he said.

The PLA at that time also realised it had fallen behind its number one imaginary enemy–Taiwan–in terms of advanced technology and weaponry. The Taiwanese independence movement had been growing since then, and especially after the Strait Crises in 1995 and 1996, when the PLA stepped back when two U.S. aircraft carrier strike groups intervened, Song said.

“So given the constant accumulation of external and internal demands, coupled with the model effect of the Gulf War, the PLA were deeply aware of the importance of strengthening its ability and improving its readiness for war,” he said.