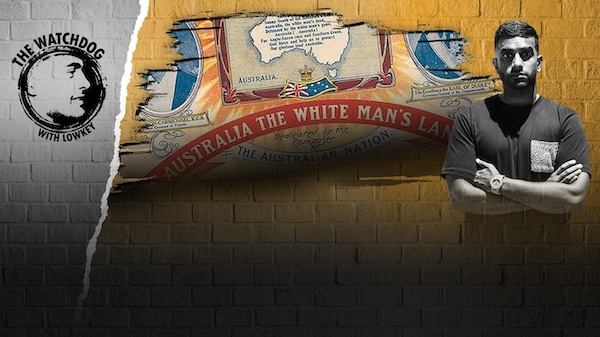 he new MintPress podcast, “The Watchdog,” hosted by British-Iraqi hip hop artist Lowkey, closely examines organizations that are in the public interest to know about including intelligence, lobby, and special-interest groups influencing policies that infringe on free speech and target dissent. The Watchdog goes against the grain by casting a light on stories largely ignored by the mainstream, corporate media.

Today, The Watchdog is talking about Australia, immigration and racism with Australian comedian and activist Aamer Rahman.

Rahman is a stand-up comedian and one half of the comedy duo “Fear of a Brown Planet.” Originally born in Saudi Arabia, he moved to Melbourne at an early age. Although he trained as a lawyer, he found his calling on stage. His comedy deals with overtly political topics like race, imperialism and terrorism.

When thought about at all, Australia is usually presented as a friendly, like-minded nation; a welcoming democratic, and stable state. This is certainly how many Americans who visit experience it. However, underneath that veneer lies a darker past.

Established by the British as a penal colony and later, a settler-colonial state, genocide of the native population has been central to Australia’s story from the very beginning. As British colonization gathered speed in the 19th century, so did the attacks against its Aboriginal peoples. Wherever the Europeans went, massacres followed.

Until well into the 1970s, the Australian government maintained a policy of removing Aboriginal and Torres Strait Islander children from their families, placing them into spartan boarding schools in an attempt to destroy native culture forever.

Taking their land were Europeans. Until 1973, the country’s immigration laws were formally described as the “White Australia policy”, barring Asian and other non-white populations from settling in the world’s sixth-largest nation. To this day, immigrants are regularly discriminated against, while the country maintains a particularly harsh policy on refugees.

Australia maintains close political ties to the United Kingdom, with British Home Secretary Pritti Patel seeing the country’s offshore migrant detention centers, referred to by some as “concentration camps” as a model for the U.K. to follow.

Many of the changes to Australia’s overtly racist policies were brought in by the government of Gough Whitlam (1972-1975). Whitlam began to recognize Aboriginal land claims, moved the country closer towards the Non-Aligned Movement and opposed nuclear weapons testing. Yet he did not last long, as a British and American plot to remove him from office succeeded, an event that, for many, effectively ended Australia’s brief run as an independent state and turned the country into an outpost of the American empire.