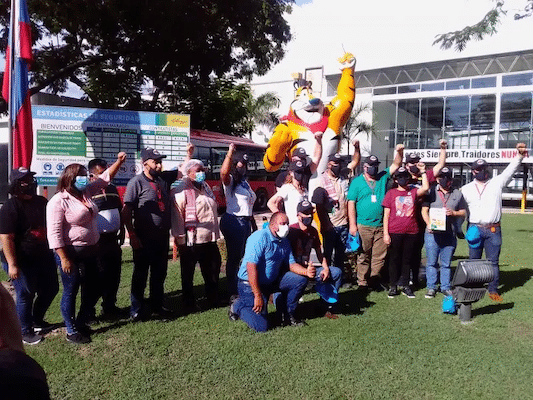 “Socialist Kellogg” factory workers and a delegation of workers from the U.S., Canada, Colombia, Mexico and Tunisia visiting the factory. (Fight Back! News/staff)

In the worker-controlled Venezuelan Kellogg factory, you see the workers working diligently to make corn flake and sugary cereals in a new package displaying the Venezuelan flag and the words “Together for Venezuela.” They are wearing black caps with red letters that say,

Kellogg made in socialism.

In May of 2018, the Kellogg bosses told the factory workers that they had the weekend off due to maintenance. When the workers arrived the following working day, they were shocked to see a large sign on the factory, “We closed operations in Venezuela.” The bosses didn’t notify them, in person, of the closure or that hundreds would lose their jobs. The workers also found out that the Kellogg had placed very little severance in their accounts, which didn’t fulfill their union contracts.

“There was no reason for the company to close and leave because all the raw materials were produced in Venezuela, the corn and sugar, etc. The company even left a year’s worth of raw materials within the factory. They closed because of political reasons and not supporting the Maduro’ government. But they committed one mistake: Kellogg left the working class well trained,” says Orlando Contreras, the president of the factory’s union.

The workers and the union hit the ground running to organize so the factory could stay open and the workers wouldn’t lose their jobs.

“The participation of the union was immediate after the factory closed. We called all the workers to tell them what was happening. Then, we made contact with the Confederation of Workers and the state government to receive support in figuring out the steps to reopen the company. The Ministry of Labor helped the workers with contacting the rest of the governmental agencies, the Attorney General and the Defense of the People agency, to gain control of the company,” said Orlando.

It was through the union and the union workers that it was possible to take over the factory. They knew how all the machines worked and how to make quality products.

“Thanks to us being trained and well-organized, all of us workers reopened the factory and put it into production. We took over the factory to protect the rights of the workers. We enforce the food policies inside our homeland of Simone Bolivar and Chavez. Now, Kellogg’s company here is a socialist enterprise. The basic principles of our socialist enterprise are to dignify the work of our working class, increase the levels of production, guarantee that the equipment is highly maintained, produce good quality products, in a fair price and to be a self-sustainable company to contribute to the economic development of the country,” says Orlando Contreras, beaming with pride.

The workers have increased the production from two cereal types to four. Two week ago, they also contacted the Ministry of Labor to visit the factory and support the workers by increasing sales. The workers asked the Ministry of Labor to prioritize selling their “Socialist Kellogg” cereal and increase the number of places their cereal is sold, since it is all produced in Venezuela, unlike the other imported cereal brands. With more sales, they can increase the production and worker salaries and benefits.

After the takeover, the workers now have an important voice in the company, which they never had before.

“The new ‘Socialist Kellogg’ President Milton Torres and the administration consult with us workers to make important decisions. If the company is doing well, they ask the workers which benefits they want to improve and prioritize. There are currently in discussions around creating a collective board with the union leaders and the administration of the factory,” says Orlando.

Not everyone was happy with this new “Socialist Kellogg,” the staff takeover, or the use of the Kellogg symbol. Kellogg is currently suing the Venezuelan government and the new factory President Milton Torres for $72 million for continuing to use the Kellogg symbol and for using their property.

“If Kellogg returns, we will give the factory back, as long as they keep the same salaries and rights of the workers,” says Orlando.

This worker takeover is an inspiration to the world on how workers and their unions can fight to stop store closings, organize for the rights of the workers, improve their salaries, working conditions and benefits.