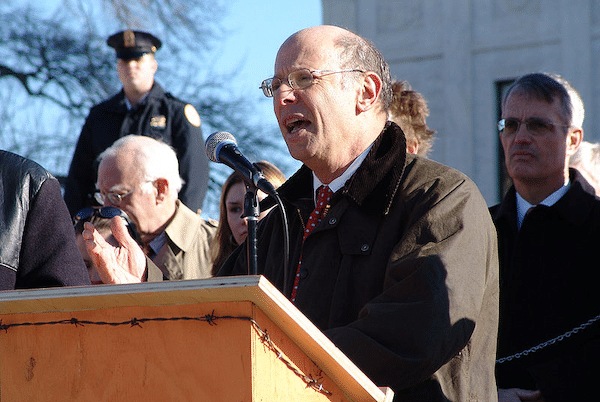 The following is a talk that Michael Steven Smith gave on July 27, 2021 at a book party in New York City’s Lower East Side sponsored by the New York City chapter of the National Lawyers Guild to celebrate the publication of Michael Ratner‘s memoir, “Moving the Bar: My Life as a Radical Lawyer“.

I met Michael back in the 1980s. He had just been elected president of the National Lawyers Guild. We lived around the corner from each other in Greenwich Village. He walked over one evening and asked me if I’d serve on the board that edited the Guild magazine, Guild Notes. “Sure,” I said. That began a political collaboration and a dear friendship that lasted until he died five years ago.

We edited two books together written by his friend and colleague Bill Kunstler. We started a radio show on Pacifica affiliate WBAI in 2004 with Heidi Boghosian, the Executive Director of the National Lawyers Guild, and Dalia Hashad, the head of the Americas work for Amnesty international. We were on every other week. Then every week. We broadcast now on 130 stations across the country and on the Internet at lawanddisorder.org.

Michael thought that law was, in his words, “villainous”. A liberal view of the law is that the law is the considered response of a civilized society to the problems of reaching a decent and intelligent conclusion to disputes between the state and its citizens or between the citizens themselves. Michael’s view was different. He agreed with Bill Kunstler that “the law was in its fundamental essence nothing more than a method of social control created by a socio-economic system determined at all costs to perpetuate itself by any means necessary for as long as possible.“

Michael had a piece of paper taped on the wall next to his desk at the Center for Constitutional Rights. It read:

Four key principles of being a radical lawyer:

1.  Do not refuse to take a case just because it has long odds of winning in court.

2.  Use cases to publicize a radical critique of U.S. policy and to promote revolutionary transformation.

Michael admired courageous people who live their lives without contradictions. John Brown was one such person. Brown and his band of 19 men captured the federal arsenal at Harpers Ferry, Virginia hoping to spark a slave uprising and arm themselves with the captured weapons. It didn’t work. Brown was surrounded, wounded, captured, tried for treason, and hanged.

Michael admired Vladimir Ilyich Lenin who helped lead the 1917 Russian Revolution which overthrew capitalism. Lenin had hoped that the revolution would spread to the rest of Europe and prevent a capitalist restoration. We know what happened in 1991.

Michael admired Che Guevara. Che led a division of rebel troops in Cuba 1959. They captured a military supply train in the famous battle of Santa Clara. The island was cut in half and the Americans supported puppet dictator Fulgencio Batista fled to the Dominican Republic. Che went and fought in Bolivia in 1966. That country had the most unstable government in all of Latin America. It’s American puppet dictator René Barrientos was on shaky ground. Che had hoped that a revolution in Bolivia would spread to neighboring Chile and Argentina and, by extension, save the Cuban revolution from being reversed by the United States, which it is still trying to do.

Che and his guerrilla fighters were surrounded by American trained and supplied troops. Che was wounded, captured, and executed by a Bolivian army sergeant according to a prearranged agreement between the CIA and Barrientos.

Michael filed a Freedom of Information Act request with the entire national security apparatus demanding their documents on Che. Several years later he got two huge boxes. Michael, my wife Debby, and I went through the documents and published them under the title “Che Guevara and the FBI.“ We went to Havana to launch the book at a well-attended press conference.

Most memorable, the courageous Black Panther Assata Shakur, who has a price on her head and a target on her back and who had been granted political asylum by the Cuban government, came from her home to the press conference.

The documents we printed were of interest in revealing that the United States was keeping track of Che from the time he was a young man before the Cuban revolution. But there was no smoking gun.

The smoking gun came later. Someone in the national security apparatus sent Michael, without his making a further request, another box. It came years later out of the blue. This box contained a document proving what Michael suspected and what the United States had denied, that the CIA assassinated the great Cuban revolutionary.

The revealing document was written by Walt Whitman Rostow of the National Security Council who had an office in president Lyndon Johnson’s White House. It was typed on White House stationery. It was a memo to Johnson himself. It boasted that the troops that United States trained and supplied “finally got him.”

We went to Havana together to do additional research in preparation for a book. We met with Afro-Cuban General Harry “Pombo“ Villegas at an appointed spot. Pombo fought with Che at the battle of Santa Clara, worked with him through the years, and went with him to Bolivia. He was one of the three guerrillas that escaped capture and walked to freedom over the Andes mountains. He showed up at our meeting wearing a baseball cap and a T-shirt with a book under his arm. After the interview we were offered to give him a lift. He graciously declined saying, “No, I’ll walk.” Michael admired Pombo for his modesty and self-effacement.

OR Books published our book under the title “Who Killed Che? How the CIA Got Away With Murder”. OR gave the rights to the Cubans for free and the book is now available in an inexpensive edition all around the island.

In the 35 years I knew Michael he never mentioned that he graduated first in his class at Columbia Law School. He went on to clerk for Judge Constance Baker Motley, the first African-American woman judge in the federal courts. She wrote that he was the best clerk she ever had.

This was in September 1971. Bill Kunstler asked Michael to go up to Attica prison and interview the survivors of the recent massacre. That’s how he started off at the CCR. It then was as Alex Cockburn called it “a small band of tigerish people.“ Michael was first a staff attorney, then the Director of Litigation, and finally its President.

Of the many significant cases Michael organized or handled two stand out. After 9/11 the U.S. government began using its base in Guantánamo, Cuba as an offshore prison where the government contended neither American nor international law or the laws of war applied. They were holding Muslims anonymously and forever. It was a secret prison and Michael realized that secrecy begets torture. These men had no right to learn of the charges against them or to be brought up in front of a judge or tried.

Michael got the CCR to get behind litigation. They lost in the lower court and in the Court of Appeals but finally the Supreme Court granted them a victory. Habeas corpus, the ancient law that went back to medieval England, was finally honored. Michael organized 600 lawyers from firms across the country, large and small, left and right, to support this basic right.

Michael was truth telling whistleblower Julian Assange’s American lawyer. He worked on Julian’s case to the end of his life. Julian was a young computer genius who figured out a way for whistleblowers to disclose damning information about war crimes and other government illegality anonymously. WikiLeaks then posted it. This kind of transparency is anathema to a police state.  Michael thought this was the most important free speech case of our era.

What would Michael be doing if he were alive today? He would be supporting Julian Assange of course. He would be campaigning to end the cruel and illegal American economic and commercial blockade of Cuba, he would’ve been down in Virginia for the sentencing of whistleblower Daniel Hale, and he would be supporting Ben and Jerry for their refusal to have their ice cream sold in the occupied territories of Palestine.

Bill Kunstler used to say that there are no green pastures, that every generation has its own battles to fight. This is why Michael wrote his memoir “Moving the Bar: My Life as a Radical Lawyer.” It can be ordered at orbooks.com

Attorney Michael Steven Smith (retired) is cohost of the radio show Law And Disorder and author of Lawyers for the Left .