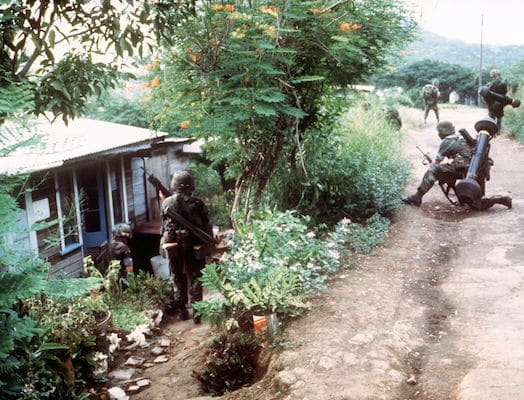 October 25th marks the 38th anniversary of Operation Urgent Fury–the name given to the United States invasion of the Caribbean commonwealth of Grenada. Thanks to the efforts of 7,600 U.S. troops and a flagrant violation of international law, Grenada was “rescued” from the horrors of communist dictatorship and certain economic collapse. This is the reason why October 25 is Grenada’s “Thanksgiving Day”, and similar to the better known Thanksgivings, it celebrates a myth. The truth is that the U.S. invasion of Grenada and the liquidation of the People’s Revolutionary Government (PRG) was a triumph of western imperialism and neoliberalism over a peoples’ socialist experiment.

With the collapse of the PRG’s socialist experiment, Grenada was thrown head first into the neoliberal era and a debt crisis, resulting in multiple rounds of structural adjustment that would eviscerate public spending and gut already-meagre social support networks. Similar to other Caribbean states, the government in Grenada is the predominant employer. When it was forced, through structural adjustment policies, to sell off public assets, structural, long term unemployment was the inevitable result. Emigration has since become characteristic of the island, as 71 percent of its secondary school and 85 percent of tertiary graduates have left the island. Not surprisingly the size of the Grenadian diaspora is estimated to be larger than the domestic population of 110,000 people.

In 2019, prior to the COVID-19 pandemic, 32 percent of Grenada’s population lived in poverty (defined as less than $6 USD per day) – the highest poverty rate in the Eastern Caribbean. In 2020, the unemployment rate hit 48 percent, and 40 percent of the population were skipping meals due to the increasingly unaffordable prices of food. If this was not bad enough, Grenada also has the unfortunate distinction of being one of the most indebted nations in the world. The devastating cycle of austerity is expected to only worsen due to increased pressures from climate change and the pandemic.

This is what capitalism looks like nearly 40 years later in “liberated” Grenada, elections and all. And it was totally avoidable. Rather than only looking at the PRG as an experiment which went tragically wrong, in his study Beyond Coloniality: Citizenship and Freedom in the Caribbean Intellectual Tradition political theorist Aaron Kamugisha more appropriately called the Grenada Revolution an “unrealized political possibility.” It is a political possibility that deserves to be put forward as an alternative model in today’s context where the political imagination of the Caribbean is handcuffed to neoliberalism.

The PRG was working to build a revolution in an underdeveloped, small island nation. The terrifying thing for the U.S. and the neo-colonial puppets in the region such as Edward Seaga, Eugenia Charles, and John Compton was that it was working. That the PRG would carry out reforms aimed at improving the lives of the masses made sense – the entire platform of the PRG was to overturn the economic and political inheritances from colonial time and build an unlikely Grenadian model.

Since the beginnings of the Grenada Revolution in 1979, many of the ideas that were advocated and successfully implemented, such as building food security, diversifying the economy, building linkages between tourism and agriculture, boosting productivity and employment, would have a direct impact on the aforementioned problems of today, all while going directly against the advice of the International Monetary Fund and World Bank. The World Bank was even forced to admit in its 1982 report that despite inheriting a deteriorating economy from the former dictator Eric Gairy, the policies and platform of the PRG were turning Grenada’s economy around. Grenada was one of the few countries in the Western hemisphere to see sustained, multi-year growth during a global economic downturn.

The PRG’ understood that despite supposed “independence” in 1974, the economy largely remained frighteningly similar to the colonial days, in terms of the inequality of land ownership, unequal terms of trade, and a broken model which saw a primarily undiversified, agricultural nation dependent on imported food.

To address these issues, the PRG put underutilized and idle land into production, increasing domestic food supplies, creating jobs, and freeing up money that would have previously gone towards food imports to infrastructure and social programs. With the money saved from these initiatives, as well as increased aid from new allies such as Cuba, the Soviet Union, East Germany, Libya and others (that was actually spent rather than stashed in private accounts), the PRG would go on to make unmatched investments in healthcare and education (over 20% of government spending per year), eliminated school fees, a national childcare system, lowered the prices of food and basic goods, improved the housing stock, improved and built infrastructure where there was none (water, power, telephone, sanitation, roads), the creation of a national cooperative federation and more. The full list of economic and social achievements is even more impressive, considering how current governments across the Caribbean literally cannot be bothered to do anything to improve the standard of living of the masses.

This speaks directly to how the PRG engaged with democracy. This also gets distorted. The New Jewel Movement began to contest elections in 1973 while Grenada was under the Gairy regime. From this moment on, the political opposition that Maurice Bishop, Unison Whiteman, and their supporters faced beatings, arbitrary arrest and detention, attacks upon meetings, demonstrations by Gairy’s paramilitary “Mongoose Gang”, and even the killing of family members. Facing such brutal repression, the PRG soon realized how the political systems of the Caribbean work in order to marginalize dissenting voices, even if they are popular with the masses.

The bloodless coup of March 1979, brought the PRG some breathing time to figure out what form democracy would take in Grenada. Elections were never off of the table, but they were not considered the best expression of popular power. Maurice Bishop referred to elections as an exercise in “5 second democracy.” The PRG’s main concern was the consolidation of the revolution and transformation of society to meet the demands of the masses. The PRG succeeded in this because of the democratic feedback received through the systems of participatory politics and budgeting, with the creation of the People’s Budget – which deepened and challenged bourgeois ideas of what democracy actually is.

It should be clear that the PRG was attacked because of these very real achievements of the Grenadian Revolution – not, as often recounted, to rescue a handful of American medical students, to stop the building of a Cuban/Soviet air base, or to bring democracy and human rights to Grenada. Indeed, at the time of the attack, the U.S. was propping up the murderous Duvalier regime in Haiti.

The real reason why Grenada was attacked and invaded, was because it was doing the unthinkable of overturning deeply entrenched neocolonialism and undertaking an imperfect but ultimately successful revolution in the most unlikely of places. This was a threat to not just the rest of the Caribbean, but to countries across the globe, including the U.S. The popular appeal of the PRG’s model and Bishop’s speeches was high within Black communities in the U.S., and the PRG leadership was invited to many community forums and campuses. The terrifying concern for the imperialists was that other countries and communities in the region would be motivated by PRG’s success and attempt similar measures.

Grenada is not alone with its contemporary economic challenges and failure to improve the standard of living of the masses. This is a common feature across the Caribbean. The current system in place is clearly not working. Grenada’s advantage is that its revolutionary past holds the key lessons to these existential crises. In 1984, Audrey Lorde distilled the extraordinary achievements and experience of the Grenada Revolution by saying, “Revolution. A nation decides for itself what it needs. How best to get it.” And Grenada’s Revolution worked. Imperialism just wouldn’t let it survive.

Kevin Edmonds (@kevin_edmonds) is a member of the Toronto-based Caribbean Solidarity Network (CSN), an organization committed to the principles of Caribbean Liberation and Unity across the region as well as throughout the Diaspora. He is also an assistant professor in the Caribbean Studies Program at the University of Toronto.