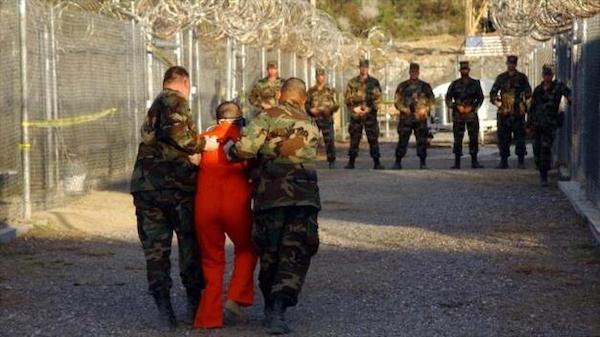 Sensory assault, sleep deprivation, isolation, stress positioning, submersion in ice water are just some of the torture methods used at the U.S. Naval Base in Guantanamo. (Photo: Hispan TV)

Chilling testimony of the torture and abuses committed against Majid Khan, held at the illegal Guantanamo Naval Base, after the September 11, 2001 attacks in New York and at the Pentagon, was recently presented by the prisoner before a jury of eight U.S. military officers, members of the court trying him.

Khan, born in Saudi Arabia and raised in Pakistan, was sentenced, October 29, to 26 years in prison after pleading guilty to aiding the Islamic fundamentalist group Al Qaeda.

As part of the plea bargain reached with the court, he was allowed to testify about his experiences, in what was the first public description of abuse by a detainee following the September 11, 2001 terrorist attacks in the U.S., according to The New York Times.

Sensory assault with intense light and sound, sleep deprivation, isolation, stress positioning, submersion in a tub of ice water, were among the “techniques” used by torturers to obtain information from the detainee.

After two days deprived of sleep and subjected to freezing temperatures, he lost his sense of reality and began hallucinating, seeing a cow, a gigantic lizard, Khan stated. In this situation, he “confessed” to his executioners whatever they wanted to hear in order to put an end to the torture.

Recently, Abu Zubaydah, a prisoner held on suspicion of being a “mastermind” of 9/11, submitted to the U.S. Supreme Court a document describing the torture he endured in a clandestine CIA prison in Poland two decades ago.

The prisoner recounts that he suffered 83 simulated drownings, the barbaric “specialists” pretended to bury him alive, keeping him locked in a narrow coffin for 11 days.

Abu Zubaydah, Majid Khan and many other prisoners illegally held in secret CIA prisons were subjected to so-called “enhanced interrogation techniques,” as the CIA practices are known.

Nothing new under the sun

From its inception in 1947, the CIA devoted substantial resources to developing interrogation techniques to extract information.

In 1963, the agency translated the results of its studies into a secret counterinsurgency manual, entitled Kubark Counterintelligence Interrogation, which was distributed for use around the world, particularly in Asia and Latin America.

“The right pain, at the right time, in the right amount, for the right effect,” were the words used to describe the CIA’s torture by Dan Mitrione, an FBI agent who served as a U.S. security advisor in Latin America, under cover as a U.S. Agency for International Development official.

Considered one of the masters of torture, his experience in the “deterrence” of “adversaries” in Uruguay in 1969 was incorporated into the CIA manual.

In 1983 they wrote a new book entitled Human Resources Exploitation Training Manual, which was refined in 1996.

Several corrections were made to the manual based on Congressional investigations, arrangements of extraordinary cynicism, including a suggestion made by Donald Rumsfeld in a memo, referring to so-called “stress positioning,” which was to be inflicted up to four hours. He commented:

I stand eight to ten hours a day. Why limit it to four hours?

As Alfred McCoy explains in his book, A Question of Torture: CIA Interrogation, From the Cold War to the War on Terror, the techniques used at Abu Ghraib, Iraq and Guantánamo, denounced by Majid Khan and other victims, are the product of massive and secret CIA research on the coercion and malleability of human consciousness.

A May 2005 report by Physicians for Human Rights, entitled Break Them Down: Systematic Use of Psychological Torture by U.S. Forces, contains a wealth of information on the torture techniques used at Guantanamo and other imperialist detention centers.

What do these methods of detention, interrogation, imprisonment without trial, secret prisons where a person can disappear for years, say about respect for human rights, which the gentlemen in Washington boast and rant about so much? Is there any evidence of due process or the most elementary norms of delivering justice in these cases, principles the U.S. government self-righteously claims to protect

The country that threatens Cuba, wielding the power of its weapons and its arrogance demanding that our besieged island allow its mercenaries to break the law and deny the rights of the majority, has no moral authority to demand anything from anyone. Do as I say and not as I do – a saying that seems fit the empire’s actions perfectly.