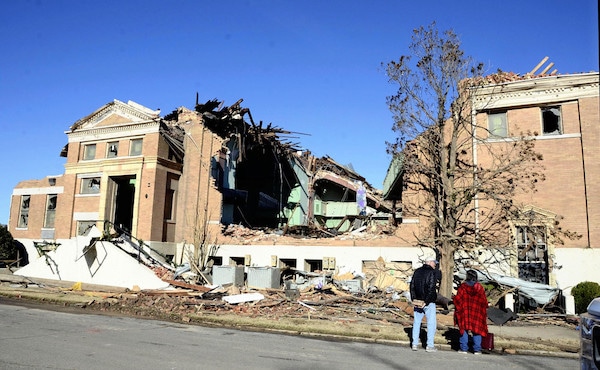 How many minutes till midnight? Two different but related news stories give us a clue.

A series of tornadoes hit Kentucky and four adjacent states, with winds of 350 km per hour, pulverizing a factory with the workers inside and devastating several cities, while a few states away (in North and South Dakota), the drought has forced farmers, the main “industry” in the area, to sell off their livestock due to the lack of water and fodder.

On the same day, in Italy, Confindustria, trade unions and various trade associations opposed setting 2035 (the date set by the COP26 in Glasgow, but not subscribed to by Italy) as the date to stop the production and sale of fossil-fuel cars—while certainly not their circulation. “Too soon!” they complained: if this really has to be done, we need “much more time.”

But what links these two news stories?

The Kentucky disaster illustrates “in real life” the conditions which will affect the lives, not of generic future generations, but already of the next one; and not only in Kentucky and the Dakotas, but everywhere, with local variations. The tug-of-war between Confindustria and the government illustrates the irresponsibility towards the climate and environmental crisis, which is now in full swing, on the part of the entire establishment (including trade unions), not only in Italy but throughout the world, united in indifference to the impending catastrophe denounced by Pope Francis.

This indifference stems from a vision—or “non-vision”—of the transition that sees the future happening in the same forms as the present and the recent past. Nothing will really change: energy, more and more abundant to meet the “growing needs,” will come from renewable sources, and, since these are not enough, from nuclear power (fission or fusion) and gas, which will continue to be used (building more and more plants), while the search for new deposits and transport with new pipelines will go on.

The emissions? We should send them underground with CCS technology, even as the largest CCS plant in the world, owned by Chevron in Australia, has just been closed because it doesn’t work.

The land? We will improve it by building more and more highways and high-speed rail lines, even while the landslides continue everywhere.

What about food? GMOs (or “Genome Editing,” as it’s called nowadays) and synthetic steak will take care of that. Obviously, giving up a car that is parked for 22 hours on average in the garage or at work—and which clogs traffic for the remaining 2 hours—would be unthinkable. Quite the opposite: while there are already almost 1.5 billion cars in the world, “sustainable development” requires that by 2035 there will be twice as many, and that by 2050 there should be one for every two inhabitants of the planet. What would we do, leave the “Third World” on foot? Perhaps electric vehicles? By 2035, a way will surely have been found to reduce emissions even further, even if the territories to be crossed will look much like Kentucky by then.

At the origin of this “discrepancy” between what we are already seeing today and what those addicted to growth and mass motorization (it hardly matters whether fossil-fuel-based or electric: both produce congestion, particulate matter pollution from brakes and tires, devastation of the territory, plundering of resources and the spirit of entitled ownership) don’t see and don’t want to see is the ambiguity around the term “sustainable development.”

It is an oxymoron, because that alleged “sustainability” does not and did not envision from the beginning the need for a U-turn with respect to everything that has characterized lifestyles and production systems over the many years in which vices and their deadly consequences have manifested themselves (even if well hidden by advertising, by a submissive culture, by an ignorance promoted by the few, and ever fewer, who rule the globalized world).

At the base of every true or claimed intention to enact ecological conversion, there is no debate involving the great mass of citizens—territory by territory, social category by social category, school by school, company by company, house by house—about what really awaits us if we let things proceed as they are now, or with few changes, and what we really need to do—and most importantly, what we absolutely must not do anymore. And immediately, to avoid dragging humanity into an irreversible disaster.

The Ministry of Ecological Transition, if it respected the mandate contained in its own name, would have to deal first of all with promoting such awareness, even before defining programs and projects—or rather at the same time as identifying them. The ecological conversion cannot be accomplished without involving its participants, who are also its actors; and we must all be actors: not the passive object of this process, but its irreplaceable protagonists. Only in this way can the inalienable demands of social justice that it entails emerge and assert themselves in all their value and power.

“They” aren’t doing it? Then we must.