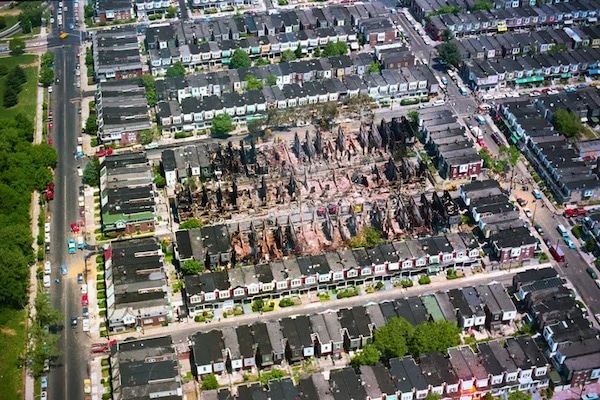 “Attention, MOVE. This is America. You have to abide by the laws of the United States.” This was the ultimatum given through a Philadelphia police megaphone to a group of Black activists trapped in their home in the early morning of 13 May 1985. The house on Osage Avenue in West Philadelphia was surrounded by hundreds of police. Thirteen MOVE members, including five children, were inside.

MOVE was an activist organisation influenced by both the Black Panther Party and the hippy movement of the late 1960s and 1970s. It combined the struggle for Black liberation with a focus on eco-friendly ways of living. Ed Pilkington, writing in the Guardian, described the politics as “a strange fusion of black power and flower power”. Members of the group wore their hair in dreadlocks, changed their last names to “Africa” and advocated veganism.

The Philadelphia police were notorious for their racist violence against working-class Black people. While the civil rights movement had won important democratic rights, for most Black people there was little respite from the poverty and police violence plaguing their lives. Most remained confined to inner-city ghettos. Cops used the crime that resulted from this poverty as justification to crack down on Black communities at will.

MOVE fought back against abuse at the hands of the police. For this they were deemed a terrorist organisation by the City of Philadelphia, which began to look for any excuse to wipe them out.

Police closed in on the MOVE house on the morning of 13 May, carrying arrest warrants obtained using alleged neighbourhood complaints. Officers had previously shown little concern about such complaints in Black neighbourhoods. It was clear that they were using them as an excuse to finish what they had started in 1978, when police provoked a firefight with MOVE activists that resulted in nine MOVE members being jailed for 100 years each for the murder of a single police officer.

More than 500 police surrounded the house. Over the next 12 hours, they fired 10,000 rounds of ammunition from sub-machine guns into the dwelling, as well as teargas and water from water cannons. Any attempt by the MOVE members to leave the house was met with bullets, so they took cover in the basement.

To finish the job, police were given the green light by the city’s mayor, Wilson Goode, to drop two military-grade bombs on the roof while the thirteen MOVE members were still inside.

Thirteen-year-old Birdie Africa ran from the house screaming. Ramona Africa also ran. Both were shot at and arrested. The remaining eleven activists were burned alive, including five children. “They’ve dropped a bomb on babies!” a horrified man who was standing behind police barricades watching the terror unfolding before him reportedly shouted.

After the explosion, police refused to let firefighters put out the blaze for more than four hours. They watched as three blocks of houses in the mostly Black working-class neighbourhood burned to the ground. Three hundred people were made homeless in a matter of hours.

The response of the mayor was unapologetic. “I’d do it again”, Goode said. The streets of cities throughout the U.S. should have been inundated with protests on the night of 13 May, but they weren’t. The main reason is that Wilson Goode was Philadelphia’s first Black Democrat mayor.

Instead of immediate retaliation, there was widespread confusion. Many people, including local activists, were shocked by Goode’s role in the bombing. The Black liberation movement in Philadelphia had done a great deal of political work to get him elected. They did so with the expectation that Goode would bring about a change in the conditions for Black Philadelphians. Not only was there no significant improvement in conditions under Goode, but he signed off on one of the worst atrocities committed against Black activists the country had ever seen.

This is a pattern that has been repeated again and again. Twenty-three years later, Barack Obama was elected president with similar expectations. One of his first acts was to bail out the banks after the Global Financial Crisis of 2008. Over the course of his two presidencies, the average wealth of the poorest 99 percent in the U.S. dropped by U.S.$4,500, while the average wealth of the top 1 percent increased by U.S.$4.9 million. Obama doggedly defended the country’s racist police, “Our entire way of life in America depends on the rule of law,” he said in Dallas in 2016.

More recently, when NBA players threatened to go on strike after the murder of George Floyd by Minneapolis police in 2020, Obama used his influence to encourage the players to abandon their stand. The basketballers’ strike would have been a significant step forward in the fight against racism and police violence, but Obama shut it down, instead arguing that a vote for the Democrats was the best way to fight back.

Joe Biden presented himself as the liberal alternative to Trump’s bigotry. He chose Kamala Harris, a Black woman and ex-cop, as his running mate. This earned him the applause of liberal commentators who fawned over this progressive pair.

But since Biden and Harris’ election, very little has changed. According to non-profit research group Mapping Police Violence, in 2021 cops killed 1,136 people—one of the deadliest years on record. As of 24 March 2022, police in the U.S. have killed 249 people, averaging about three killings a day. Biden opposes a key demand of the Black Lives Matter movement—to defund the police—and has instead announced a substantial funding increase for policing-related programs in his 2022 budget proposal, arguing that “the answer is not to defund our police departments”.

The MOVE bombing showed nearly 40 years ago that the Democrats will ultimately defend, with violence if necessary, the institutions that produce and maintain racial oppression. As important as violence though, is the party’s capacity to channel rebellion into safe waters, and co-opt its leaders. After George Floyd’s murder, the Black Lives Matter movement produced the largest urban rebellion in U.S. history. But without a leadership with a clear vision of how to win liberation, and one able to challenge the Democrats’ suffocating influence in NGO and liberal circles, it petered out.

When Black people took to the streets with rage in the 1960s over police violence, numerous Black mayors like Wilson Goode were installed to put out the fires. The year after the 2020 Black Lives Matter uprising, Eric Adams, a Black Democrat, and ex-cop, was elected Mayor of New York City. While lauded by the liberal press, he plans to bring back the controversial anti-crime units which were formally disbanded in 2020 as a concession to Black Lives Matter protesters. He recently pushed for legislation to allow 16 and 17-year-olds to be tried as adults.

The MOVE bombing sounded the death knell of the Black power movement of the late 1960s and ‘70s, of which MOVE was one of the final remnants. Malcolm X, the Black Panther Party, and now MOVE, had all been violently subdued by state repression. What followed was a period of defeat and demoralisation in the struggle against racial oppression in the U.S..

Not a single cop or official at any level has been held accountable for the bombing. The only punishment resulting from the attack was against its survivors. Ramona Africa spent seven years in prison, charged for the murder of her fellow activists who police had burned alive. Despite this, Ramona Africa continues her activism today and keeps the memory of the attack and its lessons alive, against efforts by the Democrats to sweep it under the carpet.

Ramona gave a warning to young radicals in a 2017 interview with Truthout, “Don’t allow yourselves to be compromised or co-opted–because trust me–they will try… This system will come at you with all kinds of things. All kinds! But if you fall for it, you’re done… Long live the revolution! Ona move!” To effectively fight and end racist police violence, we need to follow Ramona’s advice.