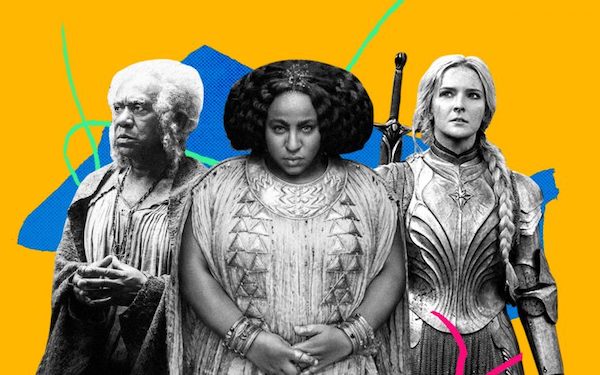 Some centuries ago and in another world, Bilbo Baggins warned Frodo against venturing out of his door. It’s a dangerous business today too, looking out one’s digital windows. Glance, and one shall see flames of unflinching rage against The Lord of the Rings’s prequel, The Rings of Power. With two episodes to its name so far, the harshest criticism against the show has been one of excessive inclusivity. How dare there be hobbits and dwarves that are black and brown?

Some fans of the fantasy epic are intent on pillage, robbing the lore of magic, free will, and friendship that glitters from a distance afar, even for people who are strangers to Middle-earth. But the newest entrant of the Tolkein realm of imagination is wokeness, and a brand of fandom has gone on to term it a “woke catastrophe.” The hate is so ardent that people are “review bombing” the show–deliberately leaving negative reviews so as to drop its collective ratings. “The American consumer has grown weary and frustrated with the endless injection of social justice politics into our entertainment culture and now they are fighting back and speaking out,” lamented one such self-proclaimed gatekeeper of thefantasy epic.

It’s tempting to interpret this as a cultural critique. The question is: what is the role of fantasy? Do fandoms double as dedicated gatekeepers of their legacy? What creative freedoms are allowed to apply to lores that run deeper than the Great River? But the controversy around Rings of Power is anything but: it shows how gatekeepers of fantasy disguise their bigotry with spurious claims over the sanctity of epic fantasy.

The criticism of Tolkein’s latest extension of fantasy can be read both in silos of the series as a singular cultural product, and in the larger context of fantasy fandom.

The prequel explores the histories and political plots of the Second Age, some thousand years before the events of The Hobbit and The Lord of the Rings. These worlds are created with deliberate thought and are beautiful to look at, but there have been valid concerns of the prequel succumbing to the trajectory of “prestige TV“: one that is gloriously built, but is stuffed with sub-plots, cliffhangers, and side characters that don’t add anything to the storytelling. Worse still are voyeuristic scenes peppered with graphic violence that treat women as afterthoughts in the larger power quests of men and their fantasies. Even when Amazon purchased the franchise’s licensing rights in 2017, some feared the epic imagination would become a “victim of its own success”–such that the sprawling world would be diluted of its riches. And while that may be the disquieting future of many of these franchises vulnerable to capitalistic and cultural mining, the current wave of criticism against The Rings of Power doesn’t share the same roots.

One form of criticism borders on nitpicking the details of epic fantasy–this coincidentally also includes a sense of unease with actors of diverse races and genders playing the habitants of the Middle-earth. Sample these two paras:

Babbling brook with cute kids? Badly choreographed fights? Cuts to the map? Besides the fact that these read like a pedantic quibble, the intent is to establish an unquestioning loyalty to the fantasy. So sacred and revered are the mystic realms of Tolkein that any form of tampering and experimenting does a disservice to Tolkien’s legacy, the argument seems to go. But what remains irksome is that the art itself is far removed from this anxiety. Critics are “acting high and mighty as though they are the sole arbiters of What Is Tolkien and who qualifies as a True Fan and imparting upon us how the Professor himself would surely feel about all of this. It gets tiresome not because it’s a critique of the work, but because the art is so flagrantly secondary to the politics of it all,” wrote Erik Kain.

The criticism backed by a purported loyalty to the source material is a red herring, a conduit to displaying more hate and giving oxygen to racism and sexism in the name of pledging allegiance to Tolkien’s fantasy world. The prequel’s protagonist is Galadriel, a warrior and one of the greatest Elves in Middle-earth. Many took issue with her helming the show’s narrative and being presented as a powerful, courageous warrior in the series. It’s impossible for her to take on an Ice Troll alone. The sheer blasphemy. But this is deeply ignorant of the way her character was written: she is indeed the “greatest of the Eldar of Valinor,” as Tolkien described her too. As one Twitter user noted: “She is like pure, uncut super elf from the Undying Lands… She is approaching deity level.” Yet, the reservations around Galadriel doing the heavy lifting (literally) and being a warrior woman carry undercurrents of misogyny and sexism. The sequel presents a refreshing diversity in the form of warrior women, female Hobbits being heroes, and black dwarf queens–but all are critiqued under a similar lens.

A review of the series asked: “Is ‘The Rings Of Power’ the worst case of leftist propaganda ever created?” The derision betrays an anxiety not just with “wokeness,” but with having their revered works of creation bend just enough to dismiss any misplaced claims of white, patriarchal, cisheteronormative supremacy. The darkness of Mordor isn’t reserved for a lore painstakingly built over 30 years. It has seeped within us too.

This is not the first time elements of diversity were brought to pre-established worlds (Star Wars, Game of Thrones, Ms. Marvel). It is a nifty formula: to argue for something’s sanctity, the highest degree of purity and preservation. The notion of fluidity between genders, races, and ethnicity even then led to wails and groans about tampering with the sanctity of these cultural legacies. If we were to argue with this on the merit of facts, even Tolkien admitted that the stories in The Hobbit  and The Lord of the Rings take place in the “north-west of ‘Middle-earth,’ equivalent to the coastlands of Europe and the north shores of the Mediterranean.” And in his letter commenting on a review of The Lord of the Rings by W. H. Auden, he wrote, “Middle-earth is not an imaginary world,” declaring it to be an “objectively real world” that reflected the status quo.

The larger, more existential question that presents itself then is what fantasy is allowed to do. Does it abide religiously with the source matter? Or does it give room for creators to adapt the literature and color it with contemporary, even woke sensibilities? Arguably, The Power of Rings is a singular instance in that it is building a world steeped within appendices: much of this never literally happened in Tolkien’s books. But this is also the benefit of the rich tapestry of the world that lies within–it is possible to tap into those creative riches and breathe life into newer and older worlds, ones that perhaps may even echo modern anxieties unlike ever before.

And arguably, the lore itself provides a canvas for exploring race and gender. If entire species are imaginary–elves, dwarves, orcs, hobbits–how difficult is it to stretch the imagination to accommodate race? The series is not too woke, but in keeping with the spirit of the fantasy realm. It is rich and ever-evolving, rarely ever enslaving itself to structures of oppression.

This criticism of including actors of color to play dwarves and elves–because Tolkien didn’t include the element of race or gender in his work–is also a case study of a false dichotomy. It is a misinformation technique, where some erect erroneous limitations of what options are available to people. To think that only white actors can play roles in an epic fantasy written about another time and world is ridden with a disingenuous understanding too.

The white male-dominated fandom claims woke politics is destroying the legacy–but their reaction betrays a blinkered understanding of what fantasy can do. Kain aptly pointed out a reckoning that has not yet dawned on fantasy fandoms: that there can never be one true interpretation to rule them all. Fantasy is a part of us, and that “us” is always changing.

The principle of fantasy is perhaps similar to that of mountains. In the second episode, Disa (played by Sophia Nomvete), the wife of Prince Durin IV of Khazad-dûm (the most famed of all Dwarven realms), says: “A mountain’s like a person. It’s a long and ever-changing story made of countless small parts. Earth and ore, air and water. Sing to it properly, each of those parts will reflect your song back to you, telling you its story, showing you what might be hidden, where to mine, where to tunnel, and where to leave the mountain untouched.”

The fantasy, the mountain, and the person are alike in this regard. They’re all made of countless parts, there are histories, identities, cultures, and anxieties. It’s imperative we look at them as an unfolding story, one that has the potential to remake us–only if we are listening.