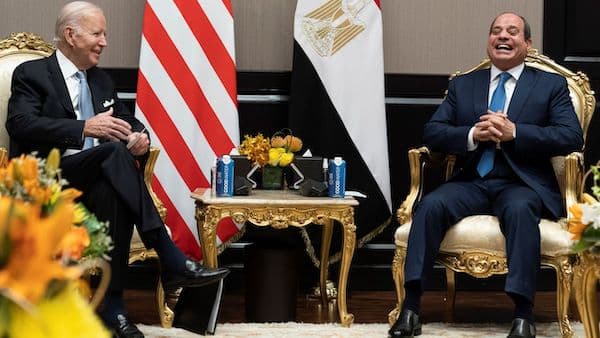 Nearly one hundred heads of state and 45,000 delegates from 200 countries are taking part in the 27th United Nations Climate Change Conference (COP 27), which began earlier this week in Sharm el-Sheikh, Egypt. It is one of the largest international meetings in recent times.

But unlike previous climate summits, the participants are barely trying to give the impression that they are doing anything about the climate catastrophe. The heads of imperialist governments who arrived read some hollow phrases about environmental protection off the teleprompter and then disappeared into the back rooms to plan their involvement in the conflicts with Russia and China and plans to dominate the former colonial countries.

NATO’s proxy war against Russia in Ukraine and the preparation of a military confrontation with China have launched a new redivision of the world between the imperialist powers, which is being fought on all continents, including the polar regions, and by all available economic, political and military means. “Climate protection” is put at the service of these imperialist machinations—and turned into its opposite.

The Egyptian dictator Abdel Fatah al-Sisi, as the host of the conference, is ensuring the undisturbed conduct of the imperialist intrigues. The luxurious tourist resort of Sharm el-Sheikh at the tip of the Sinai peninsula is hard to reach except by plane. It is guarded by an army of heavily armed soldiers who suppress any protest. For environmental activists who nevertheless made it to the conference location, a special zone has been set up in which they can protest, far removed from the public and under the watchful eyes of the security forces.

Al-Sisi, who came to power in a bloody coup d’état in 2013, rules Egypt with an iron fist. He does not allow any serious political opposition or freedom of opinion and the press. Sixty thousand political detainees are confined to his regime’s prisons, many of them on death row. Torture and extrajudicial killings are commonplace. Immediately before the conference began, some 150 people were arrested for political reasons in several Egyptian cities.

But while the imperialist powers never tire of invoking “human rights” against China or other rivals, they renounced this principle in Egypt. After all, al-Sisi is one of their most important allies in the Middle East.

“On the Highway to Climate Hell”

In a rare hint of honesty, UN Secretary-General António Guterres opened the climate conference with the warning that the world is “on the highway to climate hell—with our foot on the accelerator.” This was not a verbal exaggeration, but a sober statement of fact.

All available scientific data show that greenhouse gas emissions—the main cause of global warming—continue to rise 30 years after the first world climate conference in Rio de Janeiro. Between 1850 and 1960, the concentration of CO2 in the atmosphere increased linearly from 285 to 320 parts per million, and since then it has risen exponentially to 418 parts per million. The curve is still pointing upwards. 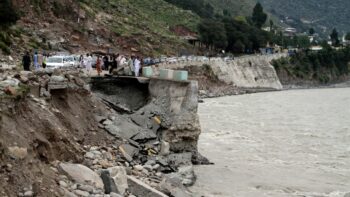 The goal of limiting global warming to 1.5 degrees Celsius compared to pre-industrial levels, which was set at the 2015 World Climate Conference in Paris, has long since been abandoned. The United Nations Framework Convention on Climate Change (UNFCCC) has calculated that emissions will increase by a further 10.6 percent by 2030, even if all countries adhere to the national reduction plans (NDCs) submitted by them. In order to achieve the 1.5-degree target, however, an emissions reduction of 43 percent would be necessary. At best, current plans limit global warming to 2.5 degrees by 2100, according to the UNFCCC. So far, only 26 out of nearly 200 countries have submitted NDCs at all.

The approaching catastrophe is already visible. Although the earth has only warmed by 1.15 degrees since the end of the 19th century, extreme weather events such as heat waves, heavy rain and hurricanes are destroying the livelihoods of millions of people. The rise in sea levels as a result of the melting of glaciers and polar caps will lead to even greater disasters.

The floods in Pakistan this summer, which killed 1,700, injured more than 12,000 and displaced at least 33 million people, give an impression of the coming disasters. In the meantime, diseases such as malaria, dengue and cholera are spreading unchecked in the devastated country and continue to claim lives.

Similar disasters are occurring in Africa, largely ignored by the international media. Wide swathes of the central Sahel are currently under water. After years of drought, floods have washed away the remaining fertile soil and flooded entire cities. Millions of people are affected in Chad, Nigeria, South Sudan and Sudan. At the same time, years of drought continue in Ethiopia, Somalia, parts of Kenya and southern Madagascar, threatening millions more with starvation and death.

In Europe and the U.S., too, the number and extent of forest fires, floods and tornadoes have increased noticeably in recent years.

But the imperialist powers rush towards the abyss. There are no proposals before the Sharm el-Sheikh summit to change direction. On the contrary, the completely inadequate decisions from previous world climate conferences have been largely abandoned since they were adopted.

War and the climate

One of the main reasons for this is the imperialist offensive against Russia and China.

The sanctions against Russian gas and oil have led to an explosion in energy prices. Many countries have therefore decided to burn coal and other high-emission energy sources again and to put already adopted programmes to phase out coal on hold. In particular, poorer countries are hardly in a position to finance the transition to environmentally friendly energy due to high energy prices and rising loan interest rates.

The lack of Russian gas has also led to an “aggressive expansion” of liquefied natural gas capacities, as the Climate Action Tracker, an international team of climate researchers states in its recent report in Sharm el-Sheikh. On all continents combined, LNG capacity will increase by 235 percent by 2030, so that at the end of the decade, with full capacity utilization, twice as much liquefied natural gas will be consumed as Russia exported last year. Climate-damaging carbon dioxide emissions thus rose to just under 2 billion tonnes, which is “incompatible” with limiting global warming.

The main beneficiaries of this development are countries such as the U.S. and Qatar, which are able to sell their gas surpluses over long distances thanks to LNG technology.

The efforts of the imperialist powers to reduce their dependence on the Chinese market and its products and raw materials in preparation for a war against China have triggered a fierce struggle for alternatives, which was fought out in Sharm el-Sheikh partly openly, partly covertly.

The German government took a particularly brazen approach, shamelessly pursuing its economic and geopolitical interests under the false banner of climate protection. The Greens, who lead the foreign, economic and environmental ministries, play a leading role in this.

Federal Chancellor Olaf Scholz (Social Democrats) used his two-day visit to Sharm el-Sheikh to land the contract for the largest construction project in Egypt’s modern history, a multi-billion-dollar project. A consortium around Siemens Mobility will build a 2,000-kilometre high-speed network and supply passenger trains and freight locomotives for it. The network is operated by a subsidiary of the Deutsche Bahn, Germany’s national railway company.

The Federal Chancellor agreed, in obvious contradiction to the official climate policy goals of his own government, to develop new gas fields with Senegal. Germany has also kept an eye on the Congo. The country is “richly blessed with raw materials such as diamonds, gold, copper, cobalt, tin and lithium,” writes the German conservative daily Frankfurter Allgemeine Zeitung (FAZ) in a flattering article about the Congolese activist Neema Namadamu, who participated in the climate summit.

Recently, new oil and gas reserves have attracted a great deal of interest. Especially since the Western states are desperately looking for alternative suppliers to Russia.

Not all the heads of government present showed their imperialist ambitions as openly as Scholz. But there is no doubt that Emmanuel Macron, Rishi Sunak, Giorgia Meloni, Ursula von der Leyen and Joe Biden, who paid a late visit to Friday’s climate conference on the way to the G20 summit in Bali, put similar pressure on other delegations in Sharm el-Sheikh with “irresistible offers.”

If anyone still needed proof that the climate catastrophe cannot be stopped by applying pressure on capitalist governments and politicians, the summit in Sharm el-Sheikh provided it. The reason for the bankruptcy of this perspective, which is advocated by Fridays for Future and other environmental movements, is not simply the malevolent intentions of individual governments or politicians, but the character of the capitalist system they defend.

The climate crisis can only be solved globally. Greenhouse gases do not stop at national borders, and an environmentally sustainable organisation of energy supply is only possible on a global scale. The scientific knowledge, technical means and material resources for such a solution are in place and enormous progress has been made in these areas over recent decades.

But such a global solution is not possible in a social system based on nation-states, which fiercely fight for global domination, and the subordination of every aspect of economic life to the profit and enrichment of a small minority. 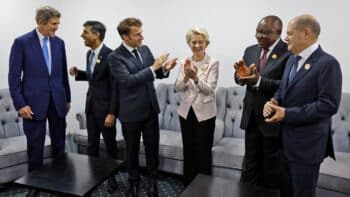 According to a new study by Oxfam, 125 billionaires and their investments are responsible for more greenhouse gas emissions than countries such as France, Egypt or Argentina. One of these billionaires emits 393 million tonnes of CO2 a year, a million times more than any member of the lower 90 percent of society.

To defend their wealth and privileges, the capitalists and their governments are capable of anything. They proved their indifference to human lives in the pandemic when they put profits before human life. This is why almost 7 million people worldwide have officially died of the coronavirus, not counting the high number of unreported cases. And the pandemic continues to spread. They show the same ruthlessness when they risk a nuclear war with Russia and China, which threatens human civilization, and when they continue to fuel climate change.

As a study published by the journal Nature shows, there is a close link between the pandemic and the climate crisis. The study concludes that progressive climate change will dramatically increase the potential for viruses already present in animal populations to spread to humans, as was the case with SARS-CoV-2, HIV and Ebola.

The climate crisis requires a socialist solution. After the beginning of the Second World War, Leon Trotsky, the leading socialist and Marxist of his time, wrote:

With the present level of technology and skill of the workers, it is quite possible to create adequate conditions for the material and spiritual development of all mankind. It would be necessary only to organize the economic life within each country and over our entire planet correctly, scientifically, and rationally, according to a general plan. So long, however, as the main productive forces of society are held by trusts, i.e., isolated capitalist cliques, and so long as the national state remains a pliant tool in the hands of these cliques, the struggle for markets, for sources of raw materials, for domination of the world, must inevitably assume a more and more destructive character. State power and domination of the economy can be torn from the hands of these rapacious imperialist cliques only by the revolutionary working class.

This is just as true today as it was then. The overcoming of the climate crisis—as well as the fight against war and social devastation—is only possible through the construction of an independent, socialist movement of the international working class and the overthrow of capitalism.