The fact that the corrupt Ma’mun Al-Humsi is a member of the council reveals a lot about its corruption and about its control by the House of Saud and Hariri Inc.   Ma’mun Humsi once said that the Hariri family does not buy people.  Enough said. As’ad AbuKhalil is a professor of political science at California […]

Which is the tyrant? say you.  Well, ’tis he That has the vine-leaf strewn among his hair And will deliver countries to the care Of courtesans — but I am vague, you see. Abu al-‘Ala’ al-Ma’arri (973-1057), born in Ma’arra in what is today Syria, was a poet and philosopher.  This poem is from The […] 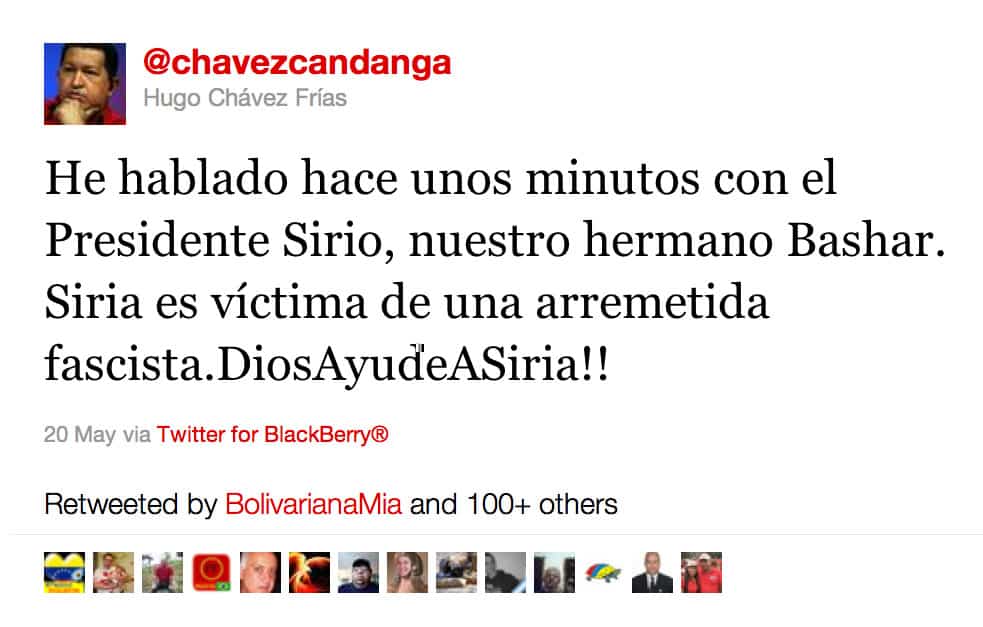 I’ve talked with the Syrian president, our brother Bashar, a couple of minutes ago.  Syria is a victim of a fascist onslaught.  God Help Syria! Hugo Chávez Frías is the president of Venezuela.  Translation by Yoshie Furuhashi (@yoshiefuruhashi | yoshie.furuhashi [at] gmail.com).  Cf. Karin Leukefeld, “Syriens Kommunisten sehen »Chance« für Veränderungen” (junge Welt, 14 May […]

It’s pretty hard to talk with Syrians about politics, as they say such things as: “Don’t believe that ‘I am an American and I have freedom.’  You are stupid.  Why are you telling me this?  You understand me?  Nobody has freedom.” This video, originally broadcast by Index on 22 April 2011, was released on YouTube […]

You’ve had your way a long, long time, You kings and tyrants, And still you work injustice hour by hour. What ails you that do not tread a path of glory? A man may take the field, although he love the bower. But some hope a divine leader with prophetic voice Will rise amid the […]

Bashar al-Assad, unlike other Arab heads of state, appears to have masses of supporters, who took to the streets on 24-26 March 2011, as shown in the videos below.  (Search YouTube for تأييد بشار الأسد, and you’ll find many more lovingly uploaded by his fans.)  However, “God, Syria, only Bashar” and “With our soul and […]

Jean Tulard is a historian, specializing in the French Revolution and revolutions in general.  According to Tulard, the future of the Tunisian uprising will depend on the role played by the army. In a month of uprising, the Tunisian people has successfully toppled the Zine El-Abidine Ben Ali regime.  Is it a revolution? Right now […]

Hossein Derakhshan, known as the “blogfather” of the Persian-language blogosphere, has been in prison since he was arrested on 1 November 2008, shortly after his return to Iran, his homeland.  Salman, a writer for the Web site Kamtarin, conducted an interview with Ozra Kiarashpour, the mother of Hossein Derakhshan, about her son’s situation. Hello, Ms. […]

Sadri Khiari, a Tunisian activist exiled in France since early 2003, is one of the founding members of the Movement of the Indigenous of the Republic (MIR) of which he is currently one of its principal leaders.  He has published, among others, Pour une politique de la racaille.  Immigré-e-s, indigènes et jeunes de banlieue (Éditions […]