After years of creeping concessions, United Auto Workers (UAW) rank and filers received an offer they had to refuse. When Delphi proposed to cut workers’ wages by two-thirds on October 8, the anger and anxiety wasn’t limited to those working in the struggling auto parts company’s plants — it spread to concerned workers across the auto industry.

Then, when the UAW International agreed to re-open its contracts with GM — after UAW President Ron Gettelfinger promised not to — more alarm bells rang.

Frustrated by the International’s silence and apparent lack of strategy, local officers and workers at a number of locals over several states reacted by organizing marches, petition drives, and meetings to resist the deep concessions looming on the horizon.

At a 6,000-worker Delphi plant in Dayton, Ohio, UAW Local 696 members were joined October 25 by community members and Dayton’s mayor for a march and rally against concessions. In Flint, Michigan — which has already lost tens of thousands of auto jobs — workers launched an online petition to “Hold Delphi Accountable.”

Leaders of Local 686 in Lockport, New York floated a plan for a work-to-rule effort at their plant, which employs more than 4,000 workers. In Canada, the Canadian Auto Workers (CAW) held an emergency anti-concessions meeting November 11 with 300 of its leaders. The CAW resolved to “not open its collective agreements before expiration because employers want to bargain concessions.”

Delphi workers organized meetings in Michigan and Indiana focused on the possibility of strikes, work-to-rule actions, and building cross-union and cross-sector solidarity within and beyond the auto industry. Despite being disavowed by local UAW officials, they were the largest such meetings in years.

The Michigan meeting was held as GM workers were beginning to vote on recently negotiated health care concessions for retired and active workers, and those concessions were also part of the agenda. Held near Grand Rapids, Michigan, the meeting mobilized auto workers from seven states. And it wasn’t just Delphi workers who came — a total of 150 rank and filers also from Chrysler, General Motors, Ford, Caterpillar, and Mitsubishi were present, along with workers from parts makers Visteon and American Axle.

Larry Solomon, retired president of UAW Local 751 in Decatur, Illinois and a leader in strikes against Caterpillar in the ’90s, told the Michigan group, “All the things that are happening to workers across the country — people say, ‘We’re not going to take it anymore.’ But then they do take it.

“Well, sometime there’s going to be a group of people that doesn’t take it anymore. That’s why I’m here.”

Another 100 workers traveled to the Kokomo, Indiana meeting on November 13, held across from the city’s Delphi plant. Warren Davis, former UAW Region 2 Director, told the meeting, “A crowd like this can defeat Delphi. Don’t think you don’t have power. You have more power than you know.”

Several more meetings are being planned near other Delphi plants in New York and Michigan.

Workers at both meetings discussed the pros, cons, and likelihood of a strike. Whether striking could give Delphi CEO Robert Miller a reason to shut some plants down was a topic of concern. When leaders of Local 686 talked about slowing down, Miller threatened, “Any plant that wants to be at the top of our plant closure list should engage in industrial action as a way of sending that message.”

At the Michigan meeting, however, Local 600 member Ron Lare reminded others not to “underestimate our leverage. If Delphi workers strike in addition to slowing down, or even prepare, it’s a real threat to the entire industry.”

One key question, asked by meeting organizer Gregg Shotwell, was, “Should we strike at strategic plants, or everyone go out together?” Several workers said it was important that all Delphi workers go out, while others said that workers should not leave the plants, but occupy them.

Workers identified key requirements they would need to meet to go out on strike, including preparing for the long haul, mobilizing support among Delphi workers and other UAW members, and building support in the community.

Many saw working to rule as the best way to mobilize workers, prepare for a strike, and put pressure on the industry.

One Delphi worker from Coopersville, Michigan said, “If we’re going to go on strike, we need to slow down first. You hurt ’em before you strike, bring down their inventories.”

GM and Delphi have been stockpiling parts and vehicles in their plants in order to avoid the supply shortage that would be inevitable if Delphi workers slow down or strike. Delphi and GM workers have been working overtime to fill these orders. To date, the UAW has not moved its members to refuse voluntary overtime to cut down on this stockpile. 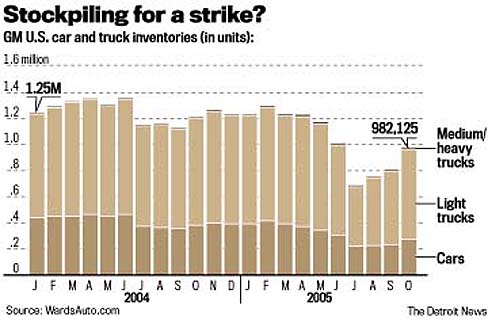 Shortly before the meeting, Gettelfinger had stated that “we should not do one thing more than what is required.” Taking this opening, Shotwell told the Kokomo meeting, “Members need to go back to locals and get with local leaders and ask them how they plan to implement work to rule since the International has now endorsed such activity.”

For many workers new to industrial actions, this meeting was an opportunity to get their questions answered and learn from others who have been through contract campaigns, slowdowns, and strikes.

With many wondering about the UAW International’s plan, Shotwell told the Indiana meeting that UAW leadership “will follow the membership.” Following the meeting, Kokomo Delphi worker Todd Jordan wrote, “If we are to defeat the assault by Delphi we must do so at the rank-and-file level.”

Workers from all sectors of the industry discussed how to operate in solidarity. Big Three and other non-Delphi workers agreed that they would fully support Delphi workers in whatever action they took.

Workers at both the Michigan and Indiana meetings emphasized the need to make connections between Delphi workers and other auto workers, retirees, and workers outside the U.S. A worker in Kokomo urged workers not to let the company “draw a line between retirees and younger workers.”

WILL THE GIANT STIR?

The day after the first rank-and-file meeting on November 7, UAW leaders seemed to show some movement.

The UAW and five other unions representing Delphi workers released a press statement to announce the formation of the Mobilizing@DelphiCoalition. The UAW joined the Steelworkers, Machinists, Operating Engineers, International Brotherhood of Electrical Workers, and IUE (the industrial division of the Communication Workers) in the effort. The brief statement listed no specific actions, but focused on the need to “fight for fairness for all Delphi stakeholders.”

But rank and filers are continuing to organize themselves. As for what’s next, Tonyia Young, from the Guide plant in Anderson, Indiana said, “The main thing is getting the word out, and getting it out quick.”

Tiffany Ten Eyck joined the staff of Labor Notes in June 2005 after working in Immokalee, Florida with the Student/Farmworker Alliance and the successful Taco Bell Boycott campaign. A former SEIU intern, anti-sweatshop activist, and anti-war agitator, she covers the Auto, Building Trades, immigrant workers, farmworkers, workers centers, and Jobs with Justice beats for Labor Notes. A version of this article originally appeared in the December issue of Labor Notes.