Capitalism always stays focused on the bottom line — profit — but occasionally finds more than it is looking for.  Such is the case with Standard and Poor’s recent research report, “Credit FAQ: The Impact of the Rise of the Left on Latin American Sovereign Ratings” (17 January 2006).  While doing research to update the commercial credit ratings of countries in Latin America, S&P analysts documented the ravages of neo-liberalism and linked them to the political unrest that is spreading throughout the region.

The S&P analysts discovered that 10 of the 12 countries in the world with the worst poverty and most unequal income distribution are in Latin America (see Table 1).

The Gini coefficient, a standard way to measure income inequality in a country, is a number between 0 and 1, with 0 corresponding to absolute equality (every household has the same income) and 1 to absolute inequality (one household has all the income).  The Gini coefficients for the nations of the world ranges from Denmark with .25 (the most equal income distribution) to Botswana with .63 (the most unequal).

Chart 1, which compares the Gini coefficients of the NAFTA trading partners, illustrates the persistence of income inequality despite a decade under the treaty that the politicians of the three nations had promised would benefit all the people of North America. 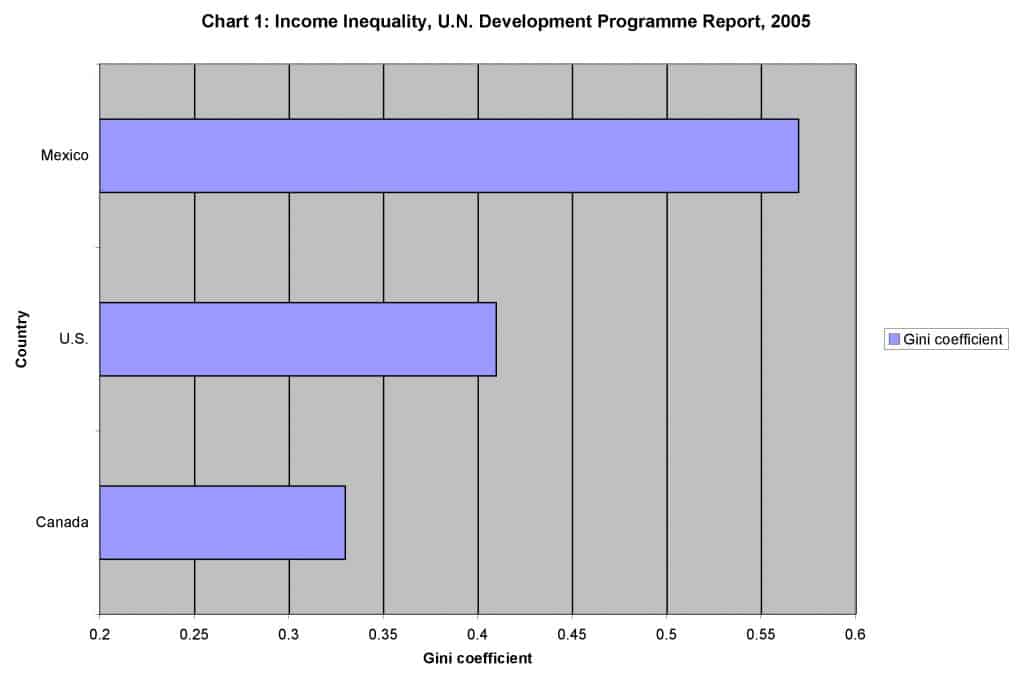 Canada, with a Gini coefficient of .33, compares favorably with the developed nations of Western Europe (which range between .24 to .36) while the U.S. shows much greater income inequality .41).  The real predicament depicted on the chart, of course, is income inequality in Mexico (.57), which falls right in with the rest of Latin America.  All the current numbers indicate that the reigning neo-liberal trade policies are only making matters worse for the people of the third world.

The S&P analysts are troubled by their findings and seem to be trying to warn their clients that the gross inequalities that exist in Latin America are driving the people of the south towards emerging left-wing political parties and leaders.  They point out that left-of-center political parties are now in power in Chile, Bolivia, Uruguay, Brazil, and Venezuela, and 11 Latin American countries will be holding presidential elections during the coming year.  But S&P’s first-world clients, many of whom contribute to the poverty and inequalities in the region, are not listening — capitalism must always stay focused on the bottom line.

The people of Latin America, however, tired of contributing to the bottom line of the north, are beginning to look elsewhere for solutions to their problems.