Washington – Fifteen people were arrested on March 1 in front of the White House after winding their way for two hours through the streets of the nation’s capital, demanding the U.S. stop torturing detainees in military prisons.

Members of Witness Against Torture began their protest at the steps of the U.S. Supreme Court, continuing to the Capitol and the Department of Justice, and ending at the White House where U.S. Park Police carried out the arrests.  Speakers called on officials in each of the buildings to cease planning and executing policies that have injured and killed people in prisons such as Guantanamo Bay, Bagram in Afghanistan, and Abu Ghraib in Iraq. 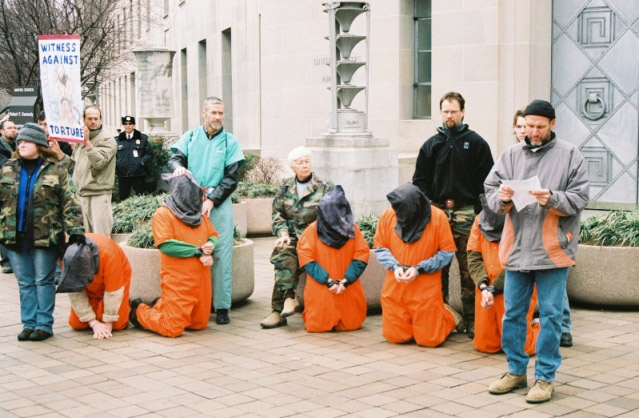 The march took place on Ash Wednesday, the first day of Lent, an annual period when Catholics pray and fast to repent for sins.

At the Department of Justice, Bill Streit used passages from the Book of Isaiah to condemn the DOJ’s role in torturing prisoners.  “Your hands are stained with blood, your fingers with guilt; Your lips speak falsehood, and your tongue utters deceit. . . . Right is repelled and justice stands far off; for truth stumbles in the public square.  Honesty is lacking, and the man who turns from evil is despoiled.”

Following Streit, Kristine Huskey, an attorney just back from Guantanamo where she represents a detainee, described torture methods prisoners have reported to her and other attorneys.

The 38 year-old attorney from the firm of Shearman and Sterling explained that some 30 detainees had been on a hunger strike since late last summer to protest their treatment.  Despite being roughly force-fed, several others joined the strike on Christmas Day.  At that point, military officials at Guantanamo ordered even harsher methods.

“Soldiers would strap a prisoner to one of several specially-purchased metal chairs with six-point restraints, insert an oversized tube through his nose and purposely overfeed him, causing him to vomit, defecate and urinate all over himself, and then leave him strapped in the chair for hours like that,” Huskey stated.

Describing what happened when the military “got serious” about ending the hunger strike after Christmas, she said, “They stopped using lubricant to help the tubes go down, and began using tubes with metal tips.”

Despite the torturous forced feedings, Huskey reported, four prisoners remain on hunger strike at Guantanamo.  Other speakers, citing reports from Amnesty International, corroborated her statements and added that prisoners reported many instances of injuries, bleeding, and unconsciousness from the torture-feeding methods, plus numerous physical and mental injuries from torture techniques such as sensory deprivation, beatings, and burning with lighted cigarettes.

Huskey told the protesters and a small knot of bystanders who stopped to listen: “One of the most important things you can do is keep this issue alive and not let the world forget.  I was just in Guantanamo and I can tell you that your actions provide a glimmer of hope to these prisoners — something they’ve not had before.  They are aware of your actions and express their thanks.”

Escorting six fellow protesters dressed in bright orange jumpsuits, hands tied and hoods over their heads, the marchers proceeded along busy sidewalks to the White House, carrying signs that read, “You can deny it’s torture, but the world knows,” “Torture is killing a person without them dying,” and “Ban all torture — no exception for Bush.”

Asked for an opinion of the procession that had just passed her, one woman replied tersely, “I’m not interested.”  A second, referring to a reporter’s notebook, said, “I don’t do that.”  A block later, a third person claimed, “I didn’t even notice it.”

Several blocks further, however, an employee of the National Association of Manufacturers, standing in front of its headquarters, answered: “At first I thought it was against the death penalty and then I saw what it was about.  Torture?  Sure, I disapprove.  This war is a lie.  It’s a fake that’s costing people’s lives.  It’s terrible what’s going on.  I lost two brothers in Viet Nam.  I know war is profitable, but it’s wrong.”

Arriving at the White House, the march was greeted by two patrol cars and a paddy wagon, quickly augmented by another wagon and dozens of uniformed and plainclothes U.S. Park Police and Secret Service agents.

Tourists stopped to watch and take pictures as the activists drew crosses made of ashes from the wood stove at Jonah House, on the White House sidewalk. 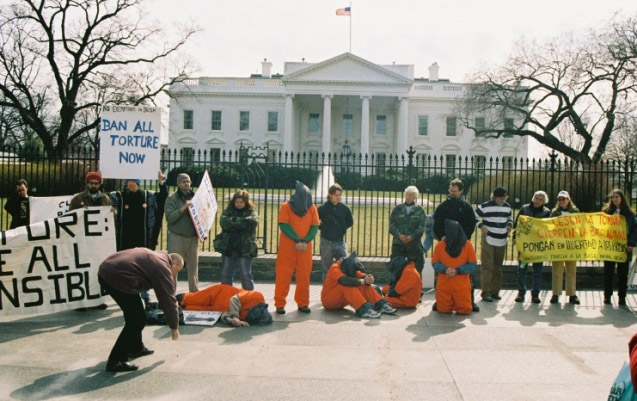 Some of the tourists entered into conversation with the protesters; most stood quietly.

A 17 year-old student from California, asked what he thought about the event, said, “Torture is still bad, but it’s sometimes necessary to save other lives.”  A passing youth slowed to inquire, “Are the people being tortured American citizens?”  When answered, “No,” he replied, “Then what’ve we got to do with it?”  One young man was overheard telling a woman he was with: “Stick around here, honey, and your face will wind up in a database.”

Francis Gabby, in Washington from Maryland’s Eastern Shore for his job, began his comments carefully.  “They have every right to be here.  I happen to agree with the majority of what they say.  I don’t believe we should be torturing people.”

Asked to respond to the California student’s assertion that torture is bad but sometimes necessary, the 57-year old building management worker replied, “It’s like the death penalty where innocent people have been executed, and besides, it just doesn’t serve any purpose — in fact, it’s doing the opposite.  It seems like we’re getting bad information anyway.  I don’t have answers, but I don’t think this is the way.”

Anne Montgomery, 79, a participant in the march, said she had been to Iraq many times with Voices in the Wilderness and Christian Peacemaker Teams.  She said, “The U.S. is exporting a tremendous escalation of violence, feeding more violence in the world.  Actions like this are important so that people will know that not all Americans are behind the war.  Every action that says we disapprove of what our government is doing helps.”

Referring to the four CPT members still held hostage in Iraq, Montgomery said yesterday’s demonstration and others like it may well be helping them stay alive and contribute to their release.

Having finished drawing the ashen crosses, 15 people stood with banners and signs in the “no protest” zone along one section of the White House fence and waited to be arrested.  In the hour it took the Park Police to begin that process, several of the soon-to-be-arrested spoke.

Her back to the fence, Theriault stated for all to hear, “Torture and indefinite detention do not represent us and do not make us secure.”

The police officers arrested each person, methodically tying their hands behind their back with plastic handcuffs.  Three of the arrestees were sitting on the sidewalk in orange jumpsuits, hooded, with their hands tied in front of them.  Officers removed the hoods and had to unwrap the electrical cord binding their hands before placing them in handcuffs.

With the arrestees in the wagons, the police drove them to a federal booking facility in Anacostia, charged them with demonstrating without a permit, cited them into court at a later date, and released them.

After the action was over, a safety officer wearing a haz-mat hood and gloves took samples of the wood ashes on the sidewalk.  As people left the area, a motorized street sweeper cleaned the sidewalk of ash.

Note: Protest organizers said that four days prior to the demonstration they sent out approximately 1000 news releases, 100 to news media outlets in the D.C. area.  Reuters was the only news media outlet seen covering any part of the actions yesterday.

Mike Ferner traveled to Iraq with “Voices” just prior to the U.S. invasion and again a year later.  His book Inside the Red Zone: A Veteran for Peace Reports from Iraq (Praeger) is due out in August.