During the countdown to the May Day immigrant walkouts, transportation industry commentators worried about the impact that immigrant strikes would have on the nation’s ports.  Many feared repeats of the 2004 and 2005 strikes by mostly immigrant Latino port truckers (or troqueros), which crippled freight traffic up and down the West Coast.

Troqueros at the nation’s largest port complex, Los Angeles/Long Beach, did not disappoint.

The thousands of tons of goods that flow from the two combined ports on a daily basis bound for warehouses and retail shelves nationwide came to a near, shuddering halt on May 1.  Over 90 percent of the 12,000 truckers that service the port refused to come into work, according to the California Trucking Association.  Port terminal operators confirmed that 80-90 percent of truck traffic was halted for the day. 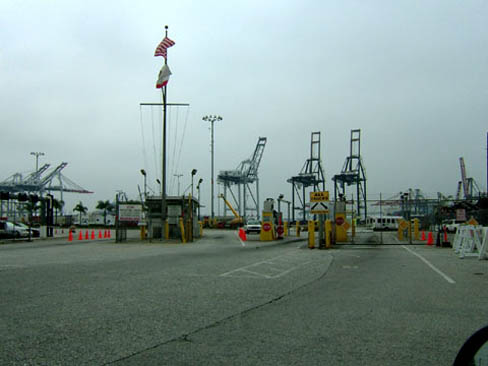 By mid-morning of the next day the port was still only running at 20 percent capacity as drivers slowly trickled back to work.  Line haul drivers (who shuttle freight containers over longer routes between ports and rail yards) are also believed to have refused work that day throughout Southern California, further congesting traffic throughout the system.  Drivers as far as Las Vegas and Phoenix were also reported to have refused containers along the overland freight corridor to the L.A./Long Beach port as part of the shutdown.

“The work stoppage flowed down the line,” said Ernesto Nevarez, an organizer who has worked with California port truckers for 20 years.  “It didn’t stop because the harbor simply shutdown — it was caused by truckers, by Labor.  They made it happen with their own organizing.”

Life on the downward sloping margin — a major cause of previous port walkouts — is once again pushing drivers into action.  Drivers who shoulder fuel, insurance, maintenance, and truck finance payments for their most part on their own, while making an average wage of only $11.33 per hour from shippers and other contractors, are working hard just to stay in place.

“It isn’t just about the price of diesel fuel, troqueros haven’t seen cost of living increases since their strike in 1993,” said Nevarez.  “Many are working double shifts or a shift and a half to make up the difference.”

The truckers’ location at a vulnerable point in the over-stretched freight distribution network gives non-union port drivers tremendous power.  On May 1, this shop floor power turned into a powerful expression of anger at their own work conditions and solidarity with the immigrant rights movement.

Indeed some of the impetus for the action came from a familiar source of anger for many immigrant workers — aggressive raids by the ICE.  Although many troqueros in the Los Angeles-area have work visas or have been naturalized, they have also seen their share of raids.

Two weeks before May 1, a line of 50 trucks were held up during one such raid.  A number of drivers lacking full documentation on their person at the time were pulled out of their cabs and their trucks were towed away.

This incident was cited as one of the reasons — along with the heightened community and media focus on the marches across the country — that drove many of the truckers into honoring the organizing efforts being made by made by a relatively small and informal network of the workers.

“Anger exploded over the raid.  Before all this we were expecting at best a 30 percent shutdown of the harbor,” said Nevarez.

A group of about 250 troqueros and community supporters rallied during the shutdown at Banning Park, a local park that has been used in the past as a meeting and organizing point for drivers.

“What the community saw was a real union meeting the way it was meant to be and how it was 100 years ago,” said Nevarez of the Banning Park rally.  “A bunch of workers in a big circle all voicing their opinions. . . . A union meeting in the open park, no permits, no stages, nothing.”

More port actions are expected over the summer as gas prices — and troqueros’ frustrations — continue to rise.

Chris Kutalik is co-editor of Labor Notes magazine (www.labornotes.org) in Detroit.  He can be reached at: chris@labornotes.org.