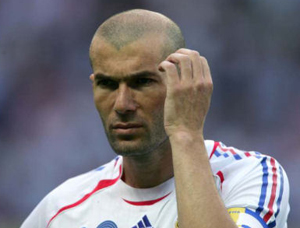 Like many millions of fans of “Les Bleus,” France’s multi-ethnic football team, I was stunned and dismayed by the strange denouement of last Sunday’s World Cup final.  Our hero Zinedine Zidane, the greatest player of his generation and an exemplary figure in many ways, was ejected from the game with ten minutes to go — ten minutes remaining in his marvelous career, as he had announced his retirement — for a powerful head-butt administered to an Italian defender, Marco Materazzi.

Several patrons of a local French restaurant where I watched the game insisted that Zidane must have been provoked, probably by racist taunts.  “Zizou,” as he is affectionately nicknamed, is the son of Algerian immigrants, and grew up in the tough “La Castellane” district in the northern suburbs of Marseilles.  “I want you to know that Zidane is a wonderful person, and we will always love him,” declared one Frenchwoman. “They probably called him a ‘fucking Arab,'” another opined, not imagining that such an affront would resemble a Valentine’s Day card compared to what Materazzi had actually said.

Disoriented by a combination of the bizarre events and the premature guzzling of a bottle of cheap champagne, my first inclination was to think philosophically.  Brecht‘s famous injunction came to mind: “unhappy is the land that needs a hero.”  Maybe we had placed too much hope in Zidane, and neglected to notice that, like everyone else, he was fallible; he had let the team and his millions of fans down by allowing the Italian to goad him into a red card.  One couldn’t help but reflect upon the vagaries of fate: only five minutes earlier, Zidane had nearly scored the potential winning goal with a brilliant play — with his head!  Would he now be consigned to slink into retirement a pariah in his own land, having forfeited France’s chances for victory?

Within a few hours, it would become clear that it was Materazzi rather than Zidane who had disgraced himself.  By various, mostly reliable accounts, the Italian had subjected Zidane to a steady torrent of racist and anti-Muslim abuse, targeting Zizou’s sister and mother (in addition to illegally tackling him several times throughout the game).  At one point Materazzi called Zizou the “son of a terrorist whore.”  Only three days earlier, Zidane had defiantly stated that “racists are not welcome” at the Cup.  Doubtlessly he had in mind the legions of racist “fans” who have plagued European football in recent years, not the Italian who would hound him throughout this game.

Materazzi’s conduct was not entirely surprising to many observers.  He is considered to be the “hardest” of the Italian “hard men” — perhaps less a committed racist than a canny and unscrupulous provocateur.  Zidane’s close and protective relationship with his family — and his mother’s recent illness — was well known.  As the focus shifted to Materazzi in the days after the game, he unpersuasively denied the reports: “I’m not cultured and I don’t even know what an Islamic terrorist is.”  But one does not need a degree from the Sorbonne to be familiar with the term “Islamic terrorist,” and his protestations were further belied by reports that he also taunted Zidane as the “son of a Harki” — an Algerian who collaborated with the French colonial authorities (not an epithet known to the “uncultured”).  This is one of the most severe insults that could be hurled at someone of Zizou’s heritage.  And Zidane has surely not forgotten that a sidekick of fascist leader Jean-Marie Le Pen uttered the same, baseless slander a few years ago.

The controversy swirling around the Cup final assumed an almost Fellini-esque quality in subsequent days.  Marco Materazzi appeared at a Rolling Stones concert in Milan on Wednesday night, where he was invited on stage by Sir Mick.  The aging “sex symbol” made a few lame quips about head problems; Keith Richard, addled on some substance or another, recently dropped out of a coconut tree and busted his cranium, losing one or two of his remaining teeth.  A fresher musical statement was offered by La Plage Records, a tiny label in Paris that released a hilarious song over the Internet called “Coup de boule” (French for “head-butt”).  According to al-Jazeera, the label’s founders “wrote the Caribbean zouk-influenced song and its chorus ‘Zidane, il a tape’ (Zidane, the hit man) as a cure to their post-defeat disappointment.”  Meanwhile, Zidane jerseys are selling for thrice their pre-head-butt price on eBay, and at mid-week the most popular video clip at youtube.com was “A New Way to Solve Problems,” which depicts a series of innocent street encounters that all culminate in an unprovoked “coup de boule.”  Zidane’s mother Malika was also dragged into the picture by some reporters who elicited from her a demand for Materazzi’s castration — suggesting that she has been watching The Daily Show, whose only fault is its obsession with a certain part of the male anatomy.

Leading up to the first game of the Cup, the biggest political-soccer story was the efforts to ban Iran from the Cup as a penalty for president Ahmadinejad’s buffoonery — a campaign led by German Greens alongside various pro-Israel groups, who shamelessly manipulated the memory of the Holocaust.  Having missed its own opportunity to attract controversy when its team was eliminated in the first round, the Iranian government jumped into the picture this week by showering Zidane with unwelcome praise for “defending his Islamic identity.”  The Iranians were not the only right-wingers to latch onto the issue.  Picking up the gauntlet for Le Pen, who is preoccupied with his upcoming trial for pro-Nazi statements, Roberto Calderoli, head of Italy’s racist Northern League party, declared the Italian victory as a triumph for white, Christian Europe.  “France’s team is composed of blacks, Islamists and communists” proclaimed Calderoli.  All the more reason to support “Les Bleus,” if we substitute Muslims for Islamists — which Calderoli wouldn’t mind, as it’s unlikely he makes the distinction.

Almost lost in the media circus was the dignity and firmness of Zidane’s comportment in a French television interview Tuesday night.  While a few loutish ESPN commentators smugly ridiculed Zizou’s apology “to all children and everyone who saw the act,” the emotion was genuine and well stated.  “Do you imagine that in a World Cup final like that with just 10 minutes to go to the end of my career, I am going to do something like that because it gives me pleasure?”  But Zidane made abundantly clear that “I can’t regret what I did because it would mean that he was right to say all that.  I can’t — repeat can’t — say that.”  He added that the provocation rather than the reaction should be condemned.  “I don’t regret anything that happened, I accept it. . . . I have taught my kids to respect people and I have taught them that they deserve to be respected in return.  I couldn’t let something like that be said without any reaction.”

So a World Cup that was thankfully free of the anti-black racism that the organizers had feared concluded with an outrageous insult to one-fifth of the human race.  It is in some ways ironic that Zidane would be the target of anti-Muslim smears.  Irrespective of the Iranians’ praise, Zidane calls himself a “non-practicing Muslim,” and he is married to a non-Muslim.  Others have failed before to usurp Zidane or to narrowly define his cultural identity.  He is a very complex person: A fierce footballer, capable of breathtaking grace and beauty both on and off the field, but also capable, at rare moments in his career, of surprising, violent outbursts.

Some have theorized that the overlapping of multiple influences, and the consequent pressures exerted upon him, help explain these contradictions.  In an interview in the London Guardian two years ago, Zidane discussed his cultural background.  “My family is very proud of me, but I am very proud of them and where they come from.  I am proud that they come from Kabylie,” a mountainous region of northern Algeria that is home to many Berbers, Zidane’s ethnic group, a non-Arab Muslim people.  “I was lucky to come from a difficult area.  It teaches you not just about football but also life. . . . People had to struggle to get through the day.  Music was important.  Football was the easy part,” Zidane told the interviewer.  “This desire never to stop fighting is something else I learnt in the place where I grew up.  And, for me, the most important thing is that I still know who I am.  Every day I think about where I come from and I am still proud to be who I am: first, a Kabyle from La Castellane, then an Algerian from Marseille, and then a Frenchman.”

Mlauzi-Steve Sharra, a young Malawian who operates a blog called “afrika-aphukira,” provided an insightful defense of Zidane’s “coup de boule” that was nearly lost in the avalanche of news articles and opinion pieces this week:

From the perspective of sportsmanship and athletic aesthetics, Zidane should have kept his calm and reported the matter to the referee.  But this perspective ignores the question of whether the referee would have believed Zidane, having not been within earshot of the incident.  Would the world have believed Zidane?  A non-response from Zidane would have in fact meant that the only sound to be heard the morning after would be the deafening cacophony of Italy’s triumph.  Would a complaint about racism, in a world in which racism has sometimes been blamed on the victim, have any chance of being heard in such a triumphalist din?

Another point being made is that a non-response reaction to a provocation on the field would have been more appropriate considering that the behavior of sports stars on and off the field has a huge impact on young people worldwide.  This is also a good point to make, but it subordinates the problem of racism as being less important than the need to provide young people with impeccable role models.  Subordinating the problem of racism to the backyard of perfect, spotless role models strikes me as not only immoral, but also unrealistic and misleading.  Do we really expect young people to be that uncritical?  Even if we accept that many young people are indeed uncritical and buy wholesale into the myth of the perfect sports star or celebrity, is that the kind of worldview we want to encourage in our young people?  For how long are we going to sweep under the carpet the problem of racism and injustice in world football?

Widely considered the greatest football player since Maradona, Zidane’s image before his public should now be richer, but not at all diminished.  Israeli author Etgar Keret wrote in Paris’s Liberation, “By his explosion of anger this player chose to end his magnificent career not as a legend, but as an individual, warm, sensitive and not larger than life.”  But let us give the last words to Malika Zidane: “Our family is deeply saddened that Zinedine’s career should end with a red card but at least he has his honor.  Some things are bigger than football.”

John Cox is an assistant history professor at Florida Gulf Coast University.  Contact him at coxj@unc.email.edu.