To anyone who understands the real history of the Arab-Israeli conflict, and has read the many meticulously well-documented books on this topic by scholars and activists,1 the mainstream media coverage of Israel’s war on Lebanon and Gaza is woefully inadequate and decidedly biased.  Again and again, over the last two weeks, the media in the US have told us that Hezbollah is to blame, that Israel is simply defending itself, and that “terrorism” must be stopped by any means necessary.  Yet, there are cracks in this otherwise well-oiled propaganda machine.

The 24-hour television news channels in particular are caught in an interesting contradiction.  On the one hand, they have been following the typical pro-Israel script.  Yet, on the other hand, they have also shown images of the tremendous destruction that Israel is wreaking on Lebanon and the horrific price that Lebanese civilians are paying.  Sometimes on the same program, we have voice-overs of talking heads denouncing Hezbollah and lauding Israel, juxtaposed with images of dead Lebanese civilians and bombed-out cities.  These images, I believe, are having an impact on public consciousness in the US.  A CNN poll on July 20 found that 43% of those polled stated that Israel should agree to a cease-fire as soon as possible (a greater percentage than those who support continued war), even though the majority admit to being more sympathetic to Israel.2

This is not surprising: ordinary people in the US, unlike their rulers, don’t like death and destruction.  This was the lesson that sections of the political elite drew after the defeat of the US during the Vietnam war: the media cannot be allowed to show casualties as it turns people off war.  Since then they have put in place an elaborate system of media control, which among other things, has restricted journalists’ access to the scene of battle.  This ensures that casualties are not covered and war is presented as clean and anti-septic, involving laser-guided missiles and precision bombing.  As Yaron Deckel, of the Israel Broadcasting Authority, observed “a war is not a pleasant thing . Look what happened when the U.S. invaded Afghanistan and Iraq.  We saw a lot of the U.S. Army.  And we haven’t seen a lot of the other side, and there were many casualties, both from the Afghanistan people and the Iraqi (sic).”3 When it comes to the actions of Israel, the US’s most important ally in the Middle East, the media similarly adopt wholeheartedly the framework set by political elites as well as various pro-Israeli propaganda groups.

This time, though, the situation is a little messy.  Not only do journalists have relatively unfettered access to the sites of destruction in Lebanon, but it hasn’t been as easy to demonize the Lebanese people as it is the Palestinians.  When Israel bombs and kills Palestinians there is little space to question these actions because of the taken-for-granted framework that Israel is simply defending itself from “terrorism.”  However, the same framework cannot be as easily applied to Lebanon for two reasons.  First, recent coverage of Lebanon has been positive — it is a country, we were told, that has “moved towards democracy.”  Second, Lebanese civilians were credited for bringing about this situation through the so-called “Cedar revolution.”  Thus, even though Hezbollah has been blamed for Israel’s war, it does not automatically follow that Lebanese people deserve what they are facing.  Unlike Palestinian civilians, who are typically viewed as potential suicide bombers and therefore unsympathetic victims, the Lebanese civilian population was only recently portrayed as the heroes of the “Cedar revolution.”  It requires too much mental gymnastics, even for the pliant U.S. media, to then turn around and portray them in an unsympathetic light.

These cracks are now becoming obvious both to journalists and to regular people in the US.  The CNN program Reliable Resources, which examines “how journalists do their jobs and how the media affect the stories,” on July 23 looked at media coverage of the “Mideast conflict.”  Howard Kurtz, the host of the program, stated that the war has “become a war of images, in which both Israel and Lebanon [are] trying to play out the fact that they have civilian casualties.  Obviously, it is a battle here for public sympathy and world opinion.”  The following exchange between Kurtz and Newsweek Middle East editor, Christopher Dickey, is noteworthy.  While Dickey seems to think that Western media coverage is more “balanced” and less “emotive” than Arab media that have presented the Lebanese as a “terribly victimized population,” he still had to admit to the asymmetrical nature of the conflict:

KURTZ: Chris Dickey in Rome, if the dominant view in the Arab media is that Lebanon is a victimized population and Israel is the aggressor and all of that, would you say that the — the main picture provided by western media is, at the very least, much more sympathetic to Israel?

DICKEY: I think it’s more sympathetic to Israel.  I think there certainly is a lot of coverage that talks about the bombs and rockets falling on Haifa, falling on other cities in Northern Israel and says, look, this is random, terrorist rocket assault and offensive.  And that’s true.  It’s absolutely true.

But I do think the western — western media have also done a pretty good job this time of showing the suffering that’s going on in Lebanon, too.  (emphasis added)

That’s an enormous amount of firepower.  It’s a lot more accurate.  These are smart munitions made by the United States of America in many cases.

DICKEY: And they do a good job of hitting exactly what they want to hit, but it’s extremely destructive and a lot of people have died.4

It is hard to predict when and if the media will stop running images of Lebanese casualties and destruction of Lebanese towns.  Unless censored by the state and/or the corporate parents that own them, the 24-hour news channels which constantly need new and sensational images will continue to show them to boost their ratings.  And in turn, more of the public is likely to start questioning Israel’s actions.

This presents a huge opportunity for the anti-war movement.  For the first time in a long while, it is possible to explain to a larger audience than ourselves why Israeli occupation of Palestinian lands leads to instability.  We have an opportunity to explain that the reason the US gives upwards of $3 billion dollars in aid to Israel is because it wants to dominate Middle East oil reserves.  And we have an opportunity to bring the question of Palestinian self-determination into the center of the peace movement, where it belongs.

1  See for instance, Noam Chomsky, The Fateful Triangle: The United States, Israel, and the Palestinians, Pluto Press, 2000; Lance Selfa (ed), The Struggle for Palestine, Haymarket Books, 2003; Edward Said, The Question of Palestine, Vintage, 1992; Nasser Aruri, Dishonest Broker: The Role of the United States in Palestine and Israel, South End Press, 2003; Norman G. Finkelstein, Image and Reality of the Israel-Palestine Conflict, 2nd edition, WW Norton, 2003;  and Finkelstein, Beyond Chutzpah: On the Misuse of Anti-Semitism and the Abuse of History, University of California Press, 2005. 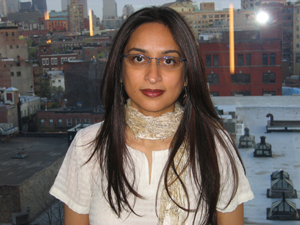 Deepa Kumar is an assistant professor of Media Studies at Rutgers University.  She is active in the anti-war movement and has written several articles on Islamophobia, the media, and US imperialism.  See, also, her other articles in MRZine: “Danish Cartoons: Racism Has No Place on the Left” (21 February 2006); “Fighting Islamophobia: A Response to Critics” (3 April 2006); and “Amnesty Now!” (16 May 2006).