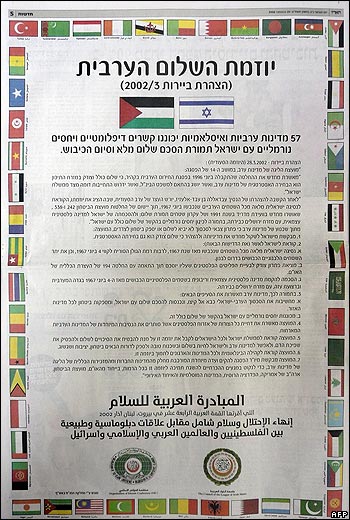 Yesterday, Nov. 20, 2008, the PLO published in ALL major Israeli daily newspapers the policy statement of the ARAB LEAGUE of 2003 (signed by 57 Arab or Muslim States), pledging to sign full peace and establish full normal relations with Israel if it returns to its pre 1967 borders and lets the Palestinians set up their independent State with East Jerusalem as its capital.

The publication of this policy statement by the PLO as a full-page advert in the Israeli daily press is an unprecedented political act of major importance, since — like all ads in the daily press — it constitutes a direct appeal not just to the government, but to every Israeli citizen. From now on it is no longer Israel’s government which has to respond to this all-Arab peace move, but every Israeli citizen. Most Israeli citizen want peace but many refuse to pay the price for that peace. They justify their refusal by arguing: “There is no partner for peace on the Palestinian side” or “The Arabs don’t want Peace. They only want to exterminate us.” This will sound hollow when it comes from anyone who rejected the Arab League peace offer.

Israeli citizens will vote in January 2009 for a new Knesset. Their vote will constitute their answer to the Arab League peace offer.

In a letter dated 25/11/1929 Albert Einstein wrote Haim Weizmann (who later became Israel’s first president) “Should we be unable to find a way to honest cooperation and honest pacts with the Arabs, then we have learned absolutely nothing during our 2000 years of suffering and deserve all that will come to us.”

The choice facing the Israeli voters is between peace with Israeli settlers who occupy conquered Palestinian territories illegally and forcibly or peace with the Palestinians who inhabit and cultivate these territories [and have done so] for over a thousand years. Israel’s future and the lives of many Israelis will be determined by this choice. Let us hope most Israeli voters accept the Arab League’s offer.

Akiva Orr is one of the founders of Matzpen. H/T to Sid Shniad.