November 24, 2008 — This morning Venezuela’s National Electoral Council (CNE) announced that the opposition won in two more states, in Tachira and Carabobo, which had been too close to call last night when the first results had been announced.  Members of Chávez’s PSUV (United Socialist Party of Venezuela) thus won governorships in 17 states, while the opposition won in five.

César Pérez Vivas won in Tachira with 49.54% (while Leonardo Salcedo, for the PSUV got 48.04%) and Henrique Salas Feo won in Carabobo with 47.72% of the vote, Mario Silva, PSUV candidate, obtained 44 .29% and Luis Acosta, the outgoing governor, running as independent after being expelled from the PSUV, obtained 6.5%.

Another important race that Chávez’s party lost was in the eastern Caracas municipality of Sucre, which is mostly poor and lower middle class.  Opposition candidate Carlos Ocariz won there with 55.7% of the vote against Jesse Chacón, a former minister who at varying times held the portfolios of Communications and Information, Interior and Justice, and of Telecommunications.

The opposition now controls four out of Caracas’s five municipalities, plus the Mayor’s office of Greater Caracas.   Previously it controlled only the three wealthiest municipalities of Chacao, Baruta, and El Hatillo.   The city’s largest and poorest municipality, Libertador, was won by former Vice-President Jorge Rodríguez, though, and thus remains in control by a Chavez supporter.

In total, Chávez’s party won 17 out of the 22 states in which governors were elected and obtained about 5.4 million votes in these contests, which would be about 57% of the total vote.  In the 2004 regional elections Chávez’s candidates won in 20 out of the 22 gubernatorial contests.  However, in the year or two before this election, governors in three of these states (in Aragua, Guarico, and Sucre states) switched over to the opposition.

Meanwhile, the opposition won five states, including the two most populous states, in addition to the Capital District of Caracas.  Four of these victories represented a switch from PSUV control to opposition control (Miranda, Tachira, Carabobo, and Greater Caracas), while in two the opposition maintained its control (Zulia and Nueva Esparta). 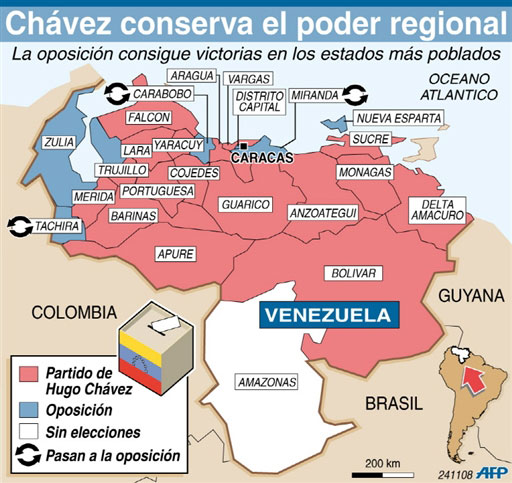 Only the state of Amazonas, one of the least populated states, did not have a gubernatorial election because its election cycle is out of sync with the rest of the country.  It is currently controlled by a Chávez supporter.

328 mayor’s positions and 233 state legislatures were also up for election on Sunday.  The vast majority of the results of these contests still have to be announced.