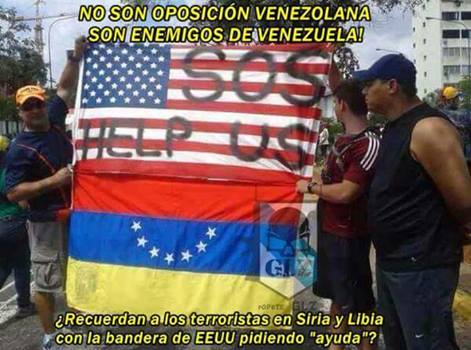 Minor edits have been made to the original article to improve readability. —Eds.

Following the script by the experts and strategists of the CIA, specialized in destabilizing and tearing down governments, counter-revolutionary tactics in Venezuela have made a “quality jump”: what began with a warm-up on the streets has now transitioned to a non-declared (but nonetheless bloody) civil war.

It grew beyond the guarimbas, occasional skirmishes and violent riots; attacks on schools, children’s hospitals and maternity wards, destruction of entire bus fleets, lootings and attacks on security forces—who respond only with water and tear gas to the ferocity of mercenaries; constant murders of social leaders, and more recently the lynching and setting on fire of three youth. These are unmistakable signs that the Venezuelan conflict has escalated to a civil war that’s affecting several cities and regions of the country.

And, as if we needed more to realize the seriousness of the situation, and the determination of seditious forces to consummate their wishes until the last consequences, the fact that the birth house of Commander Hugo Chávez Frías was set on fire casts all shadows of doubt aside.

It would be naive and suicidal to think that the dynamics of this confrontation, which was conceived to create a devastating humanitarian crisis, can be anything but the prologue to a ‘humanitarian intervention’ of the US Southern Command. This threat demands a quick and effective response by the Bolivarian government, because things will only get worse from here.

The patriotic and democratic calling of President Nicolás Maduro to a Constituent Assembly was met with more violence and savagism of the counter-revolution. The reason is clear: they don’t want a political solution to the crisis they have created. What they want is to increase the dissolution of social order, end the Chavist government and annihilate its leadership, and to impose an exemplary punishment on the Venezuelan people for daring to claim ownership over their collective destiny.

Attempts at reaching an agreement with the sector of the opposition that was more open to dialogue were a complete failure. They failed not due to lack of will on the government’s side, but (and that is the dark truth) the most powerful sector of the counter-revolution is now the terrorist fraction, and it is commanded by the United States.

With methodic coldness and under the permanent monitoring of Washington, the model that was applied in Libya for “regime change” is now being applied in Venezuela. It would be fatal not to be aware of this intention, and its consequences.

The Bolivarian government has created, countless times, opportunities to achieve peace in the country. Not only were their offers dismissed, but the putschist right-wing escalated their terrorist activities. In this context, the only sensible and rational option for the government of President Nicolás Maduro is to vigorously defend the institutional order and to mobilize the armed forces to dismantle the counter-revolution and restore social order.

Venezuela is now not only the target of economic war, and a brutal diplomatic and media offense, but also of an unconventional war that has cost over 50 lives and substantial material losses. “Plan against plan”, Martí used to say. And if a social force declares war against the government, the government must respond militarily. The time for words is over, and the signs are in plain sight.

What’s at stake is not only the Bolivarian Revolution—it’s the national integrity of Venezuela, which is threatened by an anti-patriotic and colonial leadership that crawls in the mud of history to beg the chief of the Southern Command and Washington’s powers at be to come to the rescue of the counter-revolution. If it were to triumph, drowning in blood the legacy of Commander Chávez, Venezuela would disappear as an independent national-state and would become effectively, the 51st state of the United States, grabbing through this conspiracy the most prized oil field on the planet.

We mustn’t idly ponder how big of a setback this would represent for Latin America. There’s  no time, only a finite number of days, in order to eradicate this mortal threat. The criminal intransigence of the opposition closes all paths but complete military defeat. Sadly, it’s time for weapons to talk, before the time comes for Chavism to acknowledge that their attempts have been futile, and that their brave and hopeful attempt to emancipate the country and its people blew into pieces and disappeared without trace. We must direct all our efforts to avoid this disastrous outcome.