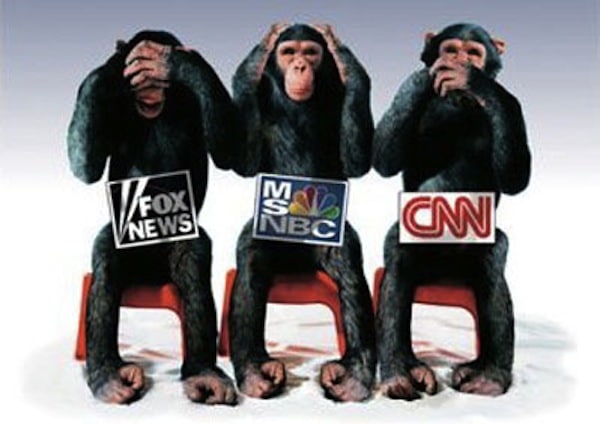 If you wish to understand the degree to which a supposedly free western media are constructing a world of half-truths and deceptions to manipulate their audiences, keeping us uninformed and docile, then there could hardly be a better case study than their treatment of Pulitzer prize-winning investigative journalist Seymour Hersh.

All of these highly competitive, for-profit, scoop-seeking media outlets separately took identical decisions: first to reject Hersh’s latest investigative report, and then to studiously ignore it once it was published in Germany last Sunday. They have continued to maintain an absolute radio silence on his revelations, even as over the past few days they have given a great deal of attention to two stories on the very issue Hersh’s investigation addresses.

These two stories, given such prominence in the western media, are clearly intended to serve as “spoilers” to his revelations, even though none of these publications have actually informed their readers of his original investigation. We are firmly in looking-glass territory.

So what did Hersh’s investigation reveal? His sources in the US intelligence establishment – people who have helped him break some of the most important stories of the past few decades, from the Mai Lai massacre by American soldiers during the Vietnam war to US abuse of Iraqi prisoners at Abu Ghraib in 2004 – told him the official narrative that Syria’s Bashar Assad had dropped deadly sarin gas on the town of Khan Sheikhoun on April 4 was incorrect. Instead, they said, a Syrian plane dropped a bomb on a meeting of jihadi fighters that triggered secondary explosions in a storage depot, releasing a toxic cloud of chemicals that killed civilians nearby.

It is an alternative narrative of these events that one might have assumed would be of intense interest to the media, given that Donald Trump approved a military strike on Syria based on the official narrative. Hersh’s version suggests that Trump acted against the intelligence advice he received from his own officials, in a highly dangerous move that not only grossly violated international law but might have dragged Assad’s main ally, Russia, into the fray. The Syrian arena has the potential to trigger a serious confrontation between the world’s two major nuclear powers.

But, in fact, the western media were supremely uninterested in the story. Hersh, once considered the journalist’s journalist, went hawking his investigation around the US and UK media to no avail. In the end, he could find a home for his revelations only in Germany, in the publication Welt am Sonntag.

There are a couple of possible, even if highly improbable, reasons all English-language publications ignored Hersh’s story. Maybe they had evidence that his inside intelligence was wrong. If so, they have yet to provide it. A rebuttal would require acknowledging Hersh’s story, and none seem willing to do that.

Or maybe the media thought it was old news and would no longer interest their readers. It would be difficult to sustain such an interpretation, but at least it has an air of plausibility – except for everything that has happened since Hersh published last Sunday.

His story has spawned two clear “spoiler” responses from those desperate to uphold the official narrative. Hersh’s revelations may have been entirely uninteresting to the western media, but strangely they have sent Washington into crisis mode. Of course, no US official has addressed Hersh’s investigation directly, which might have drawn attention to it and forced western media to reference it. Instead Washington has sought to deflect attention from Hersh’s alternative narrative and shore up the official one through misdirection. That alone should raise the alarm that we are being manipulated, not informed.

The first spoiler, made in the immediate wake of Hersh’s story, were statements from the Pentagon and White House warning that the US had evidence Assad was planning yet another chemical attack on his people and that Washington would respond extremely harshly if he did so.

Here is how the Guardian reported the US threats:

The US said on Tuesday that it had observed preparations for a possible chemical weapons attack at a Syrian air base allegedly involved in a sarin attack in April following a warning from the White House that the Syrian regime would ‘pay a heavy price’ for further use of the weapons.

And then on Friday, the second spoiler emerged. Two unnamed diplomats “confirmed” that a report by the Organisation for the Prohibition of Chemical Weapons (OPCW) had found that some of the victims from Khan Sheikhoun showed signs of poisoning by sarin or sarin-like substances.

There are obvious reasons to be mightily suspicious of these stories. The findings of the OPCW were already known and had been discussed for some time – there was absolutely nothing newsworthy about them.

There are also well-known problems with the findings. There was no “chain of custody” – neutral oversight – of the bodies that were presented to the organisation in Turkey. Any number of interested parties could have contaminated the bodies before they reached the OPCW. For that reason, the OPCW has not concluded that the Assad regime was responsible for the traces of sarin. In the world of real news, only such a finding – that Assad was responsible – should have made the OPCW report interesting again to the media.

Similarly, by going public with their threats against Assad, the Pentagon and White House did not increase the deterrence on Assad, making it less likely he would use gas in the future. That could have been achieved much more effectively with private warnings to the Russians, who have massive leverage over Assad. These new warnings were meant not for Assad but for western publics, to bolster the official narrative that Hersh’s investigation had thrown into doubt.

In fact, the US threats increase, rather than reduce, the chances of a new chemical weapons attack. Other, anti-Assad actors now have a strong incentive to use chemical weapons in false-flag operation to implicate Assad, knowing that the US has committed itself to intervention. On any reading, the US statements were reckless – or malicious – in the extreme and likely to bring about the exact opposite of what they were supposed to achieve.

But beyond this, there was something even more troubling about these two stories. That these official claims were published so unthinkingly in major outlets is bad enough. But what is unconscionable is the media’s continuing blackout of Hersh’s investigation when it speaks directly to the two latest news reports.

No serious journalist could write up either story, according to any accepted norms of journalistic practice, and not make reference to Hersh’s claims. They are absolutely relevant to these stories. In fact, more than that, the intelligence sources he cites are are not only relevant but are the reason these two stories have been suddenly propelled to the top of the news agenda.

Any publication that has covered either the White House-Pentagon threats or the rehashing of the OPCW report and has not mentioned Hersh’s revelations is writing nothing less than propaganda in service of a western foreign policy agenda trying to bring about the illegal overthrow the Syrian government. And so far that appears to include every single US and UK mainstream newspaper and TV station.