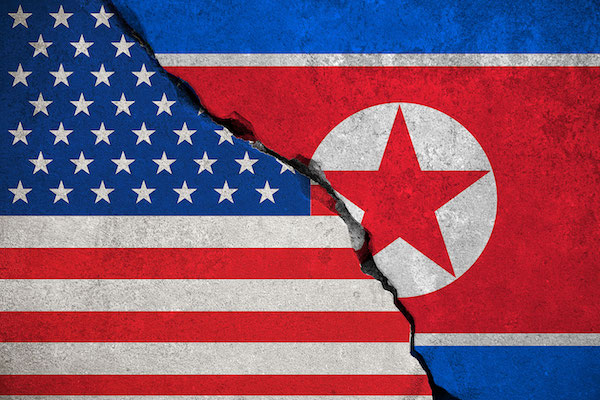 Tensions between the U.S. and North Korea are again rising in the wake of North Korea’s November 28th test of an ICBM that experts believe has the potential to deliver a nuclear bomb to cities on the east coast of the U.S., including Washington D.C.

As I have written before, we desperately need to change U.S. foreign policy towards North Korea. North Korea’s leaders continue to seek talks with the United States, with all issues on the table, those of concern to them and those of concern to the U.S. government. But the U.S. government continues to refuse. The Trump administration has even rejected North Korean offers to freeze its production and testing of missiles and nuclear weapons in return for a halt to U.S. war games directed against North Korea.

Instead, Trump continues Obama’s strategy of responding to every North Korean missile launch or nuclear test with new military threats and sanctions.

Unfortunately, changing U.S. foreign policy towards North Korea is no easy matter. One reason is that there are powerful forces opposing a de-escalation of tensions. Sadly, the tension is useful to the U.S. military industrial complex, which needs enemies to support its desire increase in the military budget. It is also useful to the U.S. military, providing it with a justification for maintaining troops on the Asian mainland and in Japan. The tension also helps the U.S. government isolate China and boost right-wing political tendencies in Japan and South Korea, developments favorable to our own militarists and right-wingers. Of course, the costs of U.S. policy fall on ordinary people.

Another reason for the difficulty in changing U.S. policy towards North Korea is that the U.S. media does little to provide the context necessary for people in the United States to understand its lawless and destructive nature.

The illegality of Trump administration threats of destruction

The Trump administration has repeatedly threatened North Korea with total destruction. What is missing from media accounts of these threats is the explanation that they represent a violation of the UN Charter and international law. As Gavan McCormack explains:

According to the UN Charter’s Article 2 (3), disputes between states must be settled by peaceful means and (4) “All members shall refrain in their international relations from the threat or use of force against the territorial integrity or political independence of any state …” [italics added]. Article 33 further specifies the obligation of parties to any dispute likely to endanger international peace and security to “first of all, seek a solution by negotiation inquiry, mediation, conciliation … or other peaceful means of their own choice.” By ruling out negotiations with North Korea and insisting only on submission, the U.S., Japan and Australia ignore or breach this clear rule (and Japan breaches also the proscription on the “threat or use of force as means of settling international disputes” in its own constitution). Going beyond that, President Trump has also not only insulted the North Korean leader from the platform of the UN General Assembly but actually threatened his country with “total destruction,” by “fire and fury, and frankly power the likes of which this world has never seen before.” That surely qualifies as threat. It is even genocidal, and therefore criminal behavior, not only on the part of those (Trump) who utter it but on the part also of those like Abe and Turnbull (to whom perhaps now India’s Modi is to be added) who endorse and encourage it.

Moreover, in 1996, the International Court of Justice, in response to a UN request, ruled that threats to use nuclear weapons against another country are a violation of international law except “in an extreme circumstance of self-defense, in which the very survival of a State would be at stake.” In certainly seems clear that the U.S. is in violation of international law because of its repeated threats and military exercises designed to practice a nuclear attack on North Korea.

Tragically, the U.S. media has remained silent about this lawlessness on the part of the U.S. government.

The illegality of U.S.-initiated UN sanctions on North Korea

The U.S. has aggressively pursued the adoption of UN sanctions on North Korea. The ones adopted in August and September are the most sweeping yet. They call for blocking North Korean exports of coal, iron, iron ore, lead, lead ore, seafood and textiles, all of which are important earners of foreign exchange. The resolutions also ban countries from opening new or expanding existing joint ventures in North Korea or renewing labor export agreements. They also impose a cap on the amount of oil North Korea is allowed to import and call for a total ban on the country’s import of natural gas and condensates. If rigorously enforced these sanctions will devastate living conditions for the great majority of North Koreans.

However, sanctions that target an entire population with the aim of causing economic collapse, such as those being imposed on North Korea, are illegal under the UN charter. As McCormack points out:

Only sanctions carefully tailored to apply to those who act in the name of the government and bear responsibility for its offensive actions may be legitimate…. The point is clear that that those imposing sanctions bear an obligation to ensure they impact only upon those who are in a position of power, not on innocent civilians. There is reason to wonder if the United Nations itself, by the ordering of collective punishment of the entire North Korean people for offenses committed by their government, may be acting criminally.

Again, where are the stories pointing out the lawlessness of U.S. and UN actions?

The missing explanation of North Korean responses to U.S. policy

The reporting on North Korea’s November 28th ICBM test offers another example of the U.S. media’s failure to educate its readers. For example, here is the LA Times:

The launch is North Korea’s first since it fired an intermediate-range missile over Japan on Sept. 15, and may have broken any efforts at diplomacy meant to end the North’s nuclear ambitions. U.S. officials have sporadically floated the idea of direct talks with North Korea if it maintained restraint….

Italy’s U.N. Ambassador Sebastiano Cardi, the current Security Council president, told reporters late Tuesday that “it’s certainly very worrying. Everybody was hoping that there would be restraint from the regime.”

This reporting certainly suggests that North Korea just doesn’t want peace no matter how hard the U.S. and broader international community try. But the story changes if we provide some missing context.

Since 2013 North Korea has offered to halt its testing of missiles and nuclear weapons if the U.S. would halt its war games. The U.S. organizes two different annual war games in South Korea, the first is held over March and April and the second is in August. But from time to time, it also engages in other smaller military exercises on and near the Korean peninsula.

The August 2017 war games included planning for a nuclear attack and “decapitation” of North Korea’s leadership. These August war games are smaller than the March-April ones but still large. This one included some 20,000 U.S. and 50,000 South Korean troops. And this year, for the first time, they were combined with a separate 18 day live-fire exercise involving U.S. and Japanese forces on the northern Japanese island of Hokkaido.

North Korea responded to these threatening maneuvers by first firing a missile over Hokkaido on August 29, the day after the completion of the US-led exercises. Then on September 3, it conducted its sixth and largest test of a nuclear weapon. And finally, on September 15, it tested a new intermediate-range missile to demonstrate its ability to hit the major U.S. air base in Guam.

There are 75 days from September 15 to November 28; this is an important interval. The reason is that the U.S. had publicly called upon North Korea to halt its missile testing for at least 60 days to show its good will.

For example, in August, Secretary of State Rex Tillerson told a group of reporters that “The best signal that North Korea could give U.S. that they’re prepared to talk would be to stop these missile launches…. We’ve not had an extended period of time where they have not taken some type of provocative action by launching ballistic missiles. So I think that would be the first and strongest signal they could send U.S. is just stop, stop these missile launches.” And in October, Joseph Yun, the U.S. State Department’s top official on North Korea policy, told an audience at the Council on Foreign Relations “that if North Korea halted nuclear and missile testing for about 60 days, that would be the signal the United States needs to resume direct dialogue with Pyongyang.”

As we have seen, the North Koreans did refrain from missile launches and weapon tests for more than 60 days. But, what did the U.S. do during that time to encourage North Korea?

On September 23 the Pentagon sent B-1B Lancer bombers, nicknamed “the swan of death,” to fly over international airspace just off the coast of North Korea, the first time since the Korean War that a U.S. bomber flew over North Korea’s east coast.

In November, the U.S. conducted more navel drills. This time it was a four-day exercise involving three aircraft carriers–the USS Ronald Reagan, Theodore Roosevelt and Nimitz–and their multiship strike groups in the waters between South Korea and Japan. This was the first time all three aircraft carriers were together in the Western Pacific in a decade. South Korean and Japanese warships also participated in the exercise.

Also in November, President Trump placed North Korea back on the list of state sponsors of terrorism, which meant new sanctions. And finally, again in November, the U.S. announced yet another war game to be scheduled for the period December 4-8 involving U.S., Japanese, and South Korean forces. Called Vigilant Ace, the military announced that this exercise would include “enemy infiltration” and “precision strike drills” and involve 8 air bases, 12,000 soldiers, and 280 aircraft, including the two stealth fighters, the F-22 and the F-35. This was to be the first time that the F-22 and F-35 would be used in war games on the Korean peninsula.

So, after waiting 75 days, and observing U.S. actions, all of which were hostile, North Korea not surprisingly responded with the launch of its most powerful ICBM, showing the U.S. that it could target even its capital if attacked. But by presenting this missile launch without the appropriate context the media made it appear as just another example of North Korea’s recklessness and hostility.

Sadly, we have a lot of work to do.