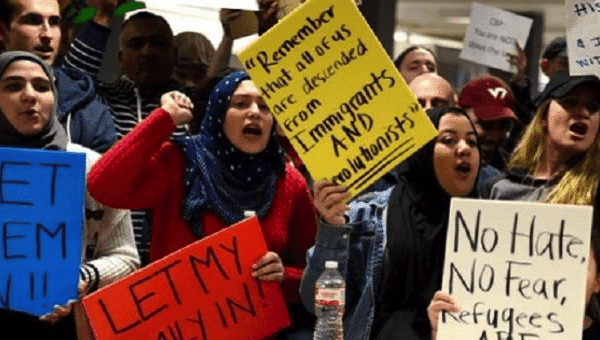 The lawsuit, filed by four U.S. immigration groups, including Americans for Immigrant Justice and the Immigration Clinic at the University of Miami, states the U.S. Immigration and Customs Enforcement, ICE, “subjected (the petitioners) to inhumane conditions and egregious abuse during a failed attempt to deport them by plane to Somalia on December 7, 2017.

The men and women “sat bound and shackled” on an ICE-chartered plane that took off from Louisiana which was Somalia bound, but only made it as far as Dakar, Senegal where it sat for 23 hours. The flight lasted over 40 hours. The passengers are currently being held in a detention center outside Miami as their lawyers prepare to halt another attempt to deport them.

“When the plane’s toilets overfilled with human waste, some of the detainees were left to urinate into bottles or on themselves,” according to the lawsuit. “ICE agents wrapped some who protested, or just stood up to ask a question, in full-body restraints. ICE agents kicked, struck, or dragged detainees down the aisle of the plane, and subjected some to verbal abuse and threats.”

“I think it’s reflective of the Trump Administration’s overall crackdown on immigration as well as reflective of their attitude towards Somalia and towards Muslims,” Kim Hunter, an attorney representing two plaintiffs, told the Guardian.

In October, a massive truck bombing carried out by the Al-Shabaab in Somalia’s capital killed over 500 people creating a climate of insecurity in the country. Despite this, the Trump administration’s claims of deporting people with a criminal record are being challenged, since nearly one-third of those on the plane had no criminal record, the lawsuit pointed out.

“This is now a disturbing pattern where ICE is targeting people who have been living in the community for many years on these orders of supervision and with work permits and suddenly they are snatched from their families and communities,” Rebecca Sharpless, another attorney representing the passengers said, Common Dreams, reported.

“It is not safe for these men and women to return, especially in light of the escalation of terrorist violence in Somalia in the last weeks.”

Per testimonies, some people aboard were physically abused by ICE officials.

A Somali man, Ibrahim Musa, who was on the plane said in the lawsuit that, “an officer pressed his thumb under his ear near his jaw and, shoved his head into the floor, causing him to lose consciousness.” And when he “regained consciousness after the assault, he found that agents had immobilized his body by wrapped him in fabric and applied cord restraints that prevented from sitting upright or standing.”

Musa, “believes news of this aborted flight has reached the general Somali public. He believes that having been on the December 7 flight jeopardizes his safety upon his return, and he believes that al-Shabaab will kill him for being a Westernized Somali.”