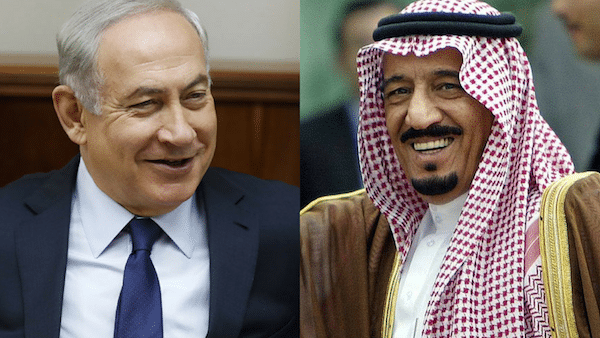 The Israeli government has begun selling the Kingdom of Saudi Arabia information on how to develop nuclear weapons, according to a senior official at the Israeli military organization iHLS (Israel’s Homeland Security). Ami Dor-on, a senior nuclear commentator at the organization—which is partially funded by U.S. weapons-giant Raytheon–came forward because of his concern over the emerging nuclear arms race in the region. The cooperation between the two countries in helping the Saudis to develop a nuclear weapons program is just the latest sign of their warming relationship, with Israel recently calling the Saudi crown prince “a partner of Israel.”

Israel has been a nuclear power for decades, though its nuclear arsenal is undeclared and the country has refused to sign the Nuclear Non-Proliferation Treaty. Estimates of its arsenal vary, with most suggesting that Israel possesses from 100 to 200 nuclear weapons. Israel was aided in the development of its nuclear program by Western powers, particularly France. Much of the Western “help” Israel received, however, was the result of covert thefts of nuclear material from countries such as the United States and Belgium.

While Dor-On, speaking to news outlet Arabi21, did not elaborate on the details of the information being exchanged, he stated that the sharing of this information was likely to be just the beginning of Israeli involvement in a future Saudi nuclear weapons program, which would likely see Israel “take the initiative to develop Saudi Arabia’s effort to acquire nuclear weapons” as a result of “the growing Saudi-Israeli relations.”

Both Israel and Saudi Arabia have justified their acquisition of nuclear weapons by citing concerns about Iran’s nuclear capabilities. However, Iran — unlike Israel — has never developed any nuclear weapons and its capacity to develop one is virtually nil under the conditions set by the Joint Comprehensive Plan of Action (JPCOA). Though the U.S. recently left the deal, Iran has since announced that it would continue to abide by the agreement if the other signatories also agreed to do so.

Dor-On additionally expressed his concern over the Saudis’ acquiring of nuclear weapons and a wider nuclear arms race in the region, stating that “this information should shock us as we see the world is changing for the worse, following the race for the possession of nuclear weapons that pass right over our heads in the Middle East.”

He also noted that Israel’s decision to begin sharing nuclear secrets with Saudi Arabia was motivated by a similar offer recently made by Pakistan to the Saudis—in which Islamabad had announced its ability to transfer nuclear-weapons expertise to the Gulf kingdom “within a month”—stating that the Israeli government did not want to “leave it [the development of a Saudi nuclear program] solely to Pakistan.” Pakistan’s offer was likely related to the fact that the Saudis have long been widely viewed as the chief financier behind Pakistan’s nuclear program.

While the announcement that the Saudis may soon develop nuclear weapons with the help of Israel and other regional players will likely cause concern throughout the international community, it is hardly the first indication of Saudi ambition to acquire weapons of mass destruction. Indeed, Saudi interest in developing nuclear weapons dates back to the 1970s, when the kingdom learned of major steps taken by both Israel and India in the development of nuclear armaments.

Not long after financing the Pakistani program, the Saudis procured a Chinese ballistic missile system capable of carrying nuclear warheads—warheads that Pakistan had made for the Saudis in 2013 and were awaiting delivery, according to a BBC report published at the time. Three years later in 2016, former CIA Operations Officer Duane Clarridge confirmed this to FOX News— stating that, through their financing of the Pakistani nuclear program, the Saudis had access to several nuclear bombs. Clarridge declined to comment on whether those nuclear weapons that had been “sitting ready for delivery” in Pakistan a few years prior had since been delivered to Saudi Arabia.

More recently, Saudi Crown Prince Muhammad bin Salman publicly announced this March, during an interview with CBS News, that the country would seek to develop nuclear weapons, were Iran to do so. In that interview, the Crown Prince stated that “Saudi Arabia does not want to acquire any nuclear bomb; but, without a doubt, if Iran developed a nuclear bomb, we will follow suit as soon as possible.” However, he did not make reference to the claim that the Saudis had already acquired access to such weapons years prior.

Furthermore, around the same time as the Crown Prince’s interview, reports surfaced claiming that the Saudis had asked the United States for permission to enrich uranium with the goal of producing a nuclear weapon.

Would Saudi nukes find their way into the hands of terrorists? A very real concern

The possibility that the Saudis already have access to nuclear weapons, and hope to soon develop them domestically, has been met with concern by analysts, particularly given the kingdom’s documented history of funneling weapons to terrorist groups such as Al Qaeda, Daesh (ISIS), and Jaish al-Islam, among others. Were the Saudis to domestically produce their own nuclear weapons, it is very much a possibility that the kingdom would include them in its future weapon shipments to the radical Wahhabist groups they actively support.

Another area of concern is the kingdom’s disrespect for civilian life and tendency to wage total war when embroiled in a military conflict. For instance, in Yemen, where the Saudis have been attempting to oust the Houthis from power since 2015, the Saudi-led coalition has repeatedly bombed civilian infrastructure and imposed a blockade of the country that has prevented food, medicine and fuel from reaching the majority of Yemen’s population of around 28 million. As a result, 18.5 million Yemenis are expected to face starvation by this December and a “preventable” cholera epidemic of historic proportions continues to claim innocent life.

The Saudis’ willingness to inflict such misery on a civilian population as part of a military conflict is yet another indication of the danger inherent in their acquiring the ability to manufacture nuclear weapons.