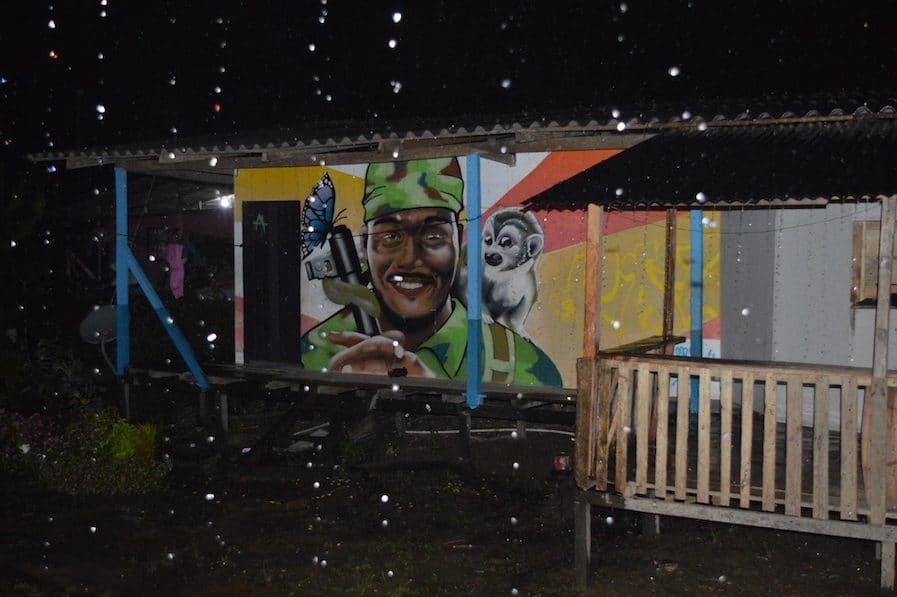 Mural in one of the FARC reincorporation zones. Photo by Viviana Rocha.

In this article we discuss the (non-) implementation of the Colombian peace accords, based on a conference given by Victoria Sandino, a leading FARC figure.1 We also examine an initiative, Ecomun, to build peace through the construction of alternative economies in the Colombian countryside.

The peace agreement reached in 2016 between the Colombian government and the Revolutionary Armed Forces of Colombia – People’s Army (FARC-EP, now renamed the Revolutionary Alternative Force of the Common, keeping the acronym) offered an opportunity to turn the page on decades of conflict. It was also a recognition, by the Colombian government, that the armed resistance was not a matter of “terrorism,” but rather rooted in the structural inequality of Colombia, and the countryside in particular. 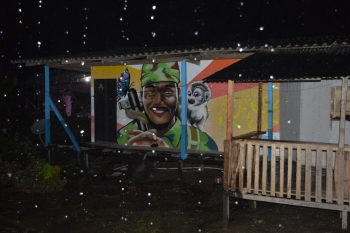 Mural in one of the FARC reincorporation zones. Photo by Viviana Rocha.

But two years on we find the peace accords are at their most fragile point, due to what Victoria Sandino terms as a systematic non-implementation from the Colombian government, both under Juan Manuel Santos, who ended its term in August, and currently under the far-right presidency of Ivan Duque. Political violence and assassinations are rampant, and statistics, which are very quickly outdated, total over 340 social and political leaders murdered since the peace deal, including 84 FARC members. The specter of the Patriotic Union (UP) is never very far away.2

This political violence is a result of the unchecked activity of paramilitary groups, who continue to act as shock troops for Colombian economic interests, old and new, clearing the way for new investments and protecting the established ones. Organisations mobilising for labour, indigenous, Afro-Colombian, peasant, environmental rights are constantly attacked with impunity by paramilitaries. These now operate more through targeted killings, as opposed to armies that occupied territories, and frequently under the name “Aguilas Negras” (“Black Eagles”).

Beyond the constant human rights violations, under the complicity or direct responsibility of Colombian authorities, despite the guerrillas fulfilling their end of the bargain and putting aside their weapons, other aspects of the peace accords are also ignored. One of them concerns the political participation of the FARC. Their presidential candidate, Rodrigo Londoño “Timochenko”, had to call off his presidential campaign because a far-right mob, armed and deadly, kept popping up at every campaign event.

In addition, the Havana agreements contemplated economic measures which, for the very first time, showed a willingness from the Colombian government to address some of the issues that underlined the decades-long armed conflict. Chief among these was land reform. Colombia has historically had one of the most unequal land distributions in the continent, with the largest one percent of landholdings concentrating 81 percent of the land.

This issue was then compounded by a population of over 7 million internally displaced Colombians, mostly from rural areas, resulting in a peasant population that is by and large landless and finds it very hard to subsist. Needless to say, the Colombian government has not moved an inch in this economic reincorporation of ex-guerrillas and rural communities in general (more on this below).

“The government has not done anything. The cooperatives and productive projects in the reincorporation zones,3 many of them run by women, have been left to fend on their own,” added Sandino. 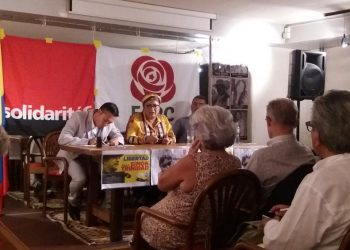 One of the most blatant violations from the Colombian government is the case of Jesus Santrich, a high-level FARC commander and key negotiator in the peace process. Santrich was arrested in April. He staged a hunger strike for 41 days to protest against his detention, and the time and prison has taken a toll, Sandino explained. Santrich is blind, and no effort is made to take him outside nor to provide him with a tablet that would allow him to read or write.

Santrich was arrested on instructions from the US Drug Enforcement Agency (DEA), accused of conspiring to send 10 tons of cocaine to the United States, and with attempts to extradite him being fought in court. This has been denounced both in Colombia and abroad as a clear violation of the peace accords, with no evidence being produced to place his charges outside the jurisdiction of the Special Jurisdiction for Peace (JEP) tribunal set up as part of the agreements.

“The attack is not just against Santrich. The goal is to take out the entire leadership from the struggle, either through imprisonment or extradition,” Sandino summed up.

Santrich was one of the FARC leaders slated to take 10 assigned seats in the Colombian senate. This case has also severely tested the faith of sectors within the party on the peace accords, with leading figure Iván Márquez not taking his senate seat in protest. When asked if Santrich’s case put the accords in jeopardy, Sandino was clear in her reply:

“It does not place the accords in jeopardy, in the sense of our returning to the mountains. We are committed to peace. It is insecurity and the non-compliance from the Colombian government that put peace itself at risk,” Sandino concluded.

Peace coops: The example of Ecomun

Given the grim picture painted above, some ex-guerrillas have left the reincorporation zones to look for safety and means of subsistence elsewhere. They can hardly be blamed. But others remain hopeful and defiant. While it has become very hard for them to present their model for an alternative society in the political arena, they hope to show it on the economic front.

Ecomun (Economías Cooperativas del Común) is a cooperative looking to make strides in this aspect. With plenty of experience accumulated during the armed conflict and different expertises, they hope to act as a kind of umbrella cooperative that will undertake some projects as well as provide support to others, alongside efforts to document all these experiments. Given their insertion in the Colombian countryside, agricultural production is one of the main avenues being pursued. 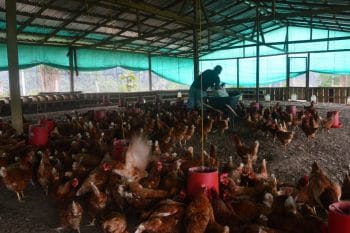 Agriculture and animal rearing are some of the main activities that Ecomun wants to develop in the Colombian countryside. Photo by Viviana Rocha.

It is important to point out that the widespread coca growing in Colombia is nothing but an economic issue. Simply put, peasants could not subsist on any other crop. Crop substitution plans never went very far, with a general lack of infrastructure and free trade agreements not helping these “voluntary” efforts and the forced eradication via herbicide spraying being preferred.4

Ecomun stresses that crop substitution is the goal, but that forced eradication criminalization of coca producers is not the way to go about it. Several of their projects are aimed at building a solidarity economy through productive projects that can provide a livelihood for ex-combatants and peasants in zones that were marred by conflict. These span a variety of areas, from farming to fishery, as well as agritourism and culture.

However, several ingredients are needed to get these projects off the ground, and this is another area in which the Colombian government has not held its end of the bargain. The program to redistribute land to landless peasants is yet to start, and the new government is even less inclined to do so. Additionally, peasants and ex-insurgents have virtually no access to credit, with loans having demands they cannot fulfill, nor to any legal support in the process of creating cooperatives.

Where the government has not delivered, Ecomun is hoping that solidarity will step up and fill the void. They have launched a fundraising campaign with multiple goals. The idea is to create a Solidarity Revolving Fund (SRF) so that fledgling cooperatives can have access to affordable loans to jump through some of the initial hurdles, among them access to land.

The ex-guerrillas are not naive in thinking that cooperatives can just flourish amid a capitalist environment such as the one in Colombia. Their creativity and hard work, as well as the fact that profit is not the holy grail, are not enough to offset the structural factors of the Colombian economy. Rather, they hope to develop alternative economic networks that will create local economies that have a degree of self-sufficiency, as well as bring agroecological practices and environmental concerns to the forefront. 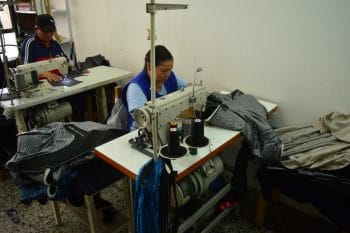 With hindsight anyone can judge the FARC’s decision to bet on a peace process, whether the lack of good faith from the Colombian government was to be expected or not, but this was their collective decision and time is not going back. The current battle is one for survival, and the FARC’s ability to showcase and enact their vision for an alternative society faces terrible hurdles. Add to that Colombia’s central role in for the US empire’s projection of power in South America, and the conclusion is that the odds are clearly against them.

But at the same time, nobody expected this to be easy, certainly not the ex-guerrillas themselves. They hope to count on the international community to hold the Colombian government to account and, perhaps more importantly, they hope solidarity movements will play their role. Whether it is by denouncing human rights violations or by supporting cooperatives for economic reincorporation, small steps can help shorten those odds.