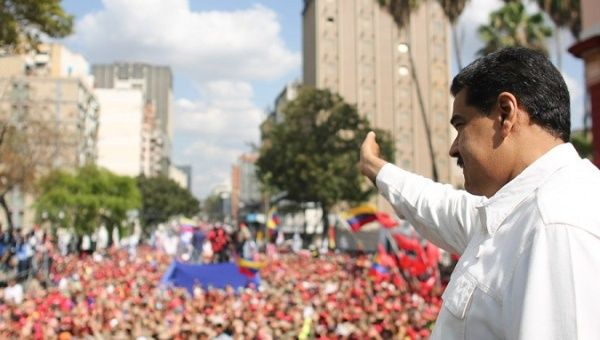 “We have overcome so many challenges, we’ll overcome this one,” Venezuelan President Nicolas Maduro told the crowd Sunday.

During a speech in Caracas, Sunday, Venezuelan President Nicolas Maduro encouraged citizens to stay true to Chavismo and the soverienty of Venezuela as the 24-hour, nationwide U.S.-backed blackout continues.

“We will liberate the electrical company of infiltrators and saboteurs…We have overcome so many challenges, we’ll overcome this one. We’ll do it with love, resistance and revolutionary courage,” Maduro said.

“The technology used in the attack on our electrical system is held only by the U.S., no other country in the world has the resource,” said the president.

The cyber attack allegedly perpetrated by anti-institutional forces Thursday against the El Guri hydroelectric plant control system left the Venezuelan population without electricity for almost 24 hours. The sabotage was intended to leave Venezuela without light for several days, and meant to destabilize the Maduro administration, Jorge Rodriguez, Sector Vice President of Communication, Tourism and Culture reported.

“They want to install a clown and a puppet as president… here it’s workers who govern,” he said, referring to Juan Guaido, who has been supported by the United States since Jan. 23, when he declared himself unconstitutionally as interim president.

On Saturday, thousands of Venezuelans participated in a large-scale protest to reject acts of interventionism in their home country as part of the annual national Bolivarian Anti-Imperialist Day celebrations.

The Anti-imperialist Day is held every March 9 to commemorate the same date in 2015 when former U.S. President Barack Obama announced the first decree against Venezuela, by considering it a threat to the North American nation.

Adults won’t take climate change seriously. So we, the youth, are forced to strike.
Venezuela in the dark: a chronicle of sabotage