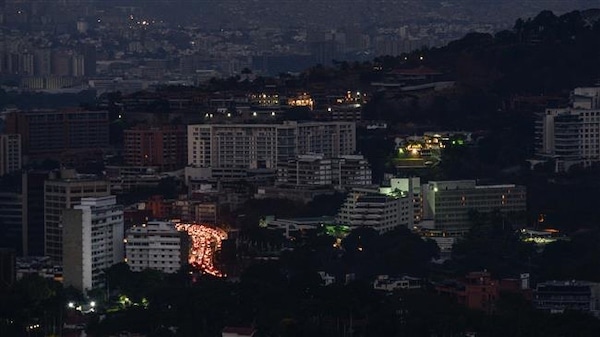 An electricity blackout has affected most of Venezuela for several days after an alleged cyber attack crashed the country’s main electricity generator, the Simon Bolivar Hydroelectric Plant in Bolivar State, commonly known as the Guri Dam.

Starting around 5 PM on Thursday, the outage affected 70 percent of the country, with only several eastern states unaffected. By Saturday morning, power had been restored to most of Caracas and to central states such as Miranda, Aragua and Carabobo, when a second major outage took place as a result of a renewed cyberattack, according to Venezuelan authorities.

As of Sunday evening, power has been restored to most of the capital and to parts of the western states of Tachira and Barinas. According to on the ground testimonies on social media, various other states, including Merida and Zulia, have not had power since Thursday.

On Saturday, President Maduro told crowds at the end of a pro-government rally that a large scale attack against the country’s electric infrastructure had taken place on Thursday afternoon. He pointed the finger at the US, stressing the high level of sophistication of the alleged aggression and adding that efforts to restore power were set back by a new cyber attack on Saturday morning.

Maduro announced that he was ordering a massive distribution of food and drinkable water starting Monday, as well as efforts to secure the normal functioning of hospitals. Water Minister Evelyn Vazquez announced on Sunday that water tanks were being deployed while the water pumping system was getting up to speed.

On Friday, Communications Minister Jorge Rodriguez told press that a cyberattack had taken place against the “Ardas” computerized system of the Guri Dam, targeting 3 of the 5 generators and forcing the dam’s turbines to stop. He added that Venezuela would present evidence of the attack to the United Nations Human Rights Commission and to other international bodies.

Rodriguez went on to deny the opposition’s claim that 79 people had died in hospitals as a consequence of the outage, but did not offer an official number. NGO Doctors for Health reported 21 deaths as of Sunday evening after allegedly contacting hospitals throughout the country.

Beginning in the middle of rush hour Thursday afternoon, the outage immediately affected public transit networks, with the Caracas metro and suburban trains paralyzed. Miranda’s governorship mobilized buses to help take citizens home, while many were forced to walk back from work. Caracas’ metro system has yet to restore service, with authorities waiting for the electrical supply to stabilize. The Venezuelan government has suspended work and school activities on Monday.

The power outages generated some skirmishes in various cities, with groups burning tyres or garbage, but no major confrontations with authorities have been reported at the time of writing.

Venezuela’s electrical system has been dogged by poor maintenance and sabotage in recent years, with infrastructure strained by under-investment and Washington’s economic sanctions further compounding difficulties. In addition, as The New York Times reported, fuel shortages caused by U.S. sanctions have prevented thermal power plants from backing up the Guri Dam.

Self-proclaimed “Interim President” Juan Guaido gave a press conference on Sunday, slamming the government’s handling of the electricity crisis and repeating calls for the armed forces to back his efforts in ousting the Maduro government.

Guaido announced he would ask the opposition-controlled National Assembly, which has been in contempt of court since 2016, to declare a state of “national alarm” on Monday.

The opposition leader had previously addressed supporters after a march on Saturday in the east side of the capital. Tensions flared up between opposition followers and security forces after the former blocked the Francisco Fajardo highway for a short period. 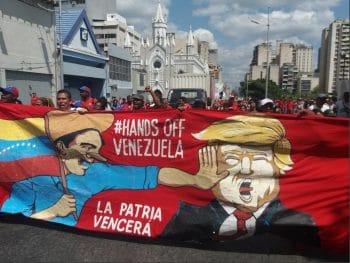 An anti-imperialist march was held in Caracas on Saturday, March 9. (Ricardo Vaz)

“All options are on the table,” Guaido told supporters when pressed about calling for a foreign intervention, while adding that further mobilizations will be announced in the near future. Hours earlier he had tweeted that “electricity will return once the usurpation ends.”

Maduro and other Chavista leaders slammed what they termed as the “worst aggression” in recent history, praising the population’s “resistance” and urging patience while efforts to restore electricity to the country continue.

For their part, U.S. officials blamed the Maduro government for the blackout, with Secretary of State Mike Pompeo tweeting “No food. No medicine. Now, no power. Next, no Maduro.” Venezuelan officials have pointed to tweets by Pompeo, Florida Senator Marco Rubio, and other U.S. leaders as evidence of a U.S. hand behind the blackout, though further evidence has yet to be made public.

Edited by Lucas Koerner from Caracas.