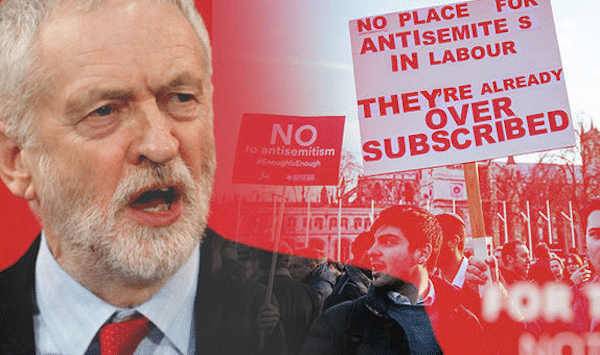 The Jewish Labour Movement likes to date its origins to the Poale Zion organisation, which was founded in 1903. A socialist society, Poale Zion affiliated itself not only with the British Labour party but also with a wide range of anti-Palestinian Zionist organisations such as the World Zionist Organisation and the Israeli Labour party. The latter carried out the ethnic cleansing of the vast majority of Palestinians in 1948 and the party’s leaders to this today publicly support the illegal settlement “blocs” that are displacing Palestinians and stealing their land.

But as the investigative journalist Asa Winstanley has shown, before the unexpected ascent of Corbyn to the Labour leadership in 2015, the JLM had largely fallen into dormancy.

It was briefly revived in 2004, when Israel was facing widespread criticism in Britain over its brutal efforts to crush a Palestinian uprising in the occupied territories. But the JLM only really became active again in 2015.

According to a covert recording of a private JLM event in late 2016, its then chair Jeremy Newmark said he and other activists had agreed to reform the group in September 2015 in response to “the rise of Jeremy Corbyn” and “Bernie Sanders in the States”. Corbyn has been elected Labour leader only days previously.

According to the transcript, Newmark told the other activists that it would be the “start of a struggle and a battle we will all be engaged in for months and probably years ahead of us”. He added that the JLM would be a suitable vehicle for their work because of the “rights and privileges” it enjoyed as a Labour party affiliate organisation.

The motive behind the JLM’s resuscitation was also revealed by an undercover documentary made by Al-Jazeera, aired in early 2017. It showed that the JLM was acting as little more than a front for the Israeli embassy and that the mission it set itself was to weaken Corbyn in the hope of removing him from the leadership.

Early on, the JLM and other pro-Israel lobbyists within the party realised that most effective way to damage Corbyn, and silence solidarity with the Palestinian cause, was to weaponise the charge of anti-semitism.

Support for Palestinian rights necessarily requires severe criticism of Israel, whose popular, rightwing governments have shown no interest in making concessions to the Palestinians on self-determination. In fact, while westerners have debated the need for urgent peacemaking, Israel has simply got on with grabbing vast tracts of Palestinian land as a way to destroy any hope of statehood.

But pro-Israel lobbyists in the UK have found that they can very effectively turn this issue into a zero-sum game–one that, in the context of a British public conversation oblivious to Palestinian rights, inevitably favours Israel.

The thrust of the lobby’s argument is that almost all Jews identify with Israel, which means that attacks on Israel are also attacks on Jewish identity. That, they claim, is a modern form of anti-semitism.

This argument, if it were true, has an obvious retort: if Jews really do identify with Israel to the extent that they are prepared to ignore its systematic abuse of Palestinians, then that would make most British Jews anti-Arab racists.

Further, if Jewish identity really is deeply enmeshed in the state of Israel, that would place a moral obligation on Jews to denounce any behaviour by Israel towards Palestinians that violates human rights and international law.

And yet the very Jewish leaders claiming that Israel is at the core of their identity are also the ones who demand that Jews not be expected to take responsibility for Israel’s actions–and that to demand as much is anti-semitic.

Could there be a clearer example of having your cake and eating it?

Nonetheless, the JLM has very successfully hijacked the debate within Labour of the Israeli-Palestinian conflict in order to silence criticism. It has worked hard to impose a highly controversial new definition of anti-semitism that conflates it with criticism of Israel. Seven on the 11 examples of anti-semitism used to illustrate the new definition relate to Israel.

Arguing, for example, that Israel is a “racist endeavour”, the view of many in the growing BDS movement and among Corbyn supporters is now being treated as evidence of anti-semitism.

For this reason, the JLM has been able to file a complaint against Labour with the Equality and Human Rights Commission arguing that the party is “institutionally anti-semitic”.

Labour is only the second political party after the neo-Nazi British National Party to have been subjected to an investigation by the equality watchdog.

Counterweight to the JLM

Despite its claims, the JLM does not represent Jewish opinion in the Labour party. The JLM says it has 2,000 members, though that figure–if accurate–includes non-Jews. Attendance at its annual general meeting this month could be measured in the dozens.

As one Jewish critic observed:

There are some 300,000 Jews in Britain. The Jewish Labour Movement claims to represent us all. So why were there fewer people at their AGM [annual general meeting] than at my Labour Party branch AGM?

Many Jews in the Labour party have chosen not to join the JLM, preferring instead to act as a counterweight by creating a new Jewish pressure group that backs Corbyn called Jewish Voice for Labour.

Even a new JLM membership drive publicised by former Labour leader Gordon Brown reportedly brought only a small influx of new members, suggesting that support for the JLM’s anti-Corbyn, pro-Israel agenda is very limited inside Labour.

Speaking for ‘the Jews’

The re-establishment of the JLM has one very transparent aim in mind: to push out Corbyn, using any means at its disposal. At its annual general meeting, the JLM unanimously passed a motion of no confidence in Corbyn, describing him as “unfit to be Prime Minister”.

The resolution declared that “a Labour Government led by [Corbyn] would not be in the interests of British Jews”.

One Jewish commentator derisively noted the JLM’s arrogance in speaking for all British Jews at a time of Conservative government-imposed austerity:

I would not presume to proclaim what is in the interests of ‘the Jews’, but I really cannot imagine that the person who drafted this resolution had any real experience of meeting unemployed Jews, Jewish pensioners and single mothers just scraping by, or Jews who are struggling as they use under-resourced mental health services.

In other circumstances, a group of people operating inside a major political party using underhand methods to disrupt its democratic processes would be described as entryists. Some 2,000 pro-Israel fanatics within Labour are trying to overturn the overwhelming wishes, twice expressed at the ballot box, of the Labour membership, now numbering more than 500,000.

Nonetheless, last week the JLM started to show its hand more publicly. It has been noisily threatening to disaffiliate from the Labour party. In the circumstances that would at least be an honourable–if very unlikely–thing for it to do.

Instead, it announced that it would begin scoring local and national Labour politicians based on their record on anti-semitism. After the JLM’s frantic lobbying for the adoption of the new anti-semitism definition, it seems clear that such scores will relate to the vehemence of a candidate’s criticism of Israel, or possibly their ideological sympathy with Corbyn, more than overt bigotry towards Jews.

That was underscored this week when a senior Labour politician, Richard Burgon, the shadow justice secretary, came under fire from the JLM and Board of Deputies for comments he made in 2014, during Israel’s attack on Gaza, that only recently came to light. He was recorded saying: “The enemy of the Palestinian people is not the Jewish people, the enemy of the Palestinian people are Zionists.” He had previously denied making any such comment.

Insulting a core part of their [Jewish people’s] identity and then dissembling about it is shameful behaviour from a senior frontbencher in our party, let alone someone who aspires to administer our justice system.

According to the Labour party’s own figures, actual anti-Jewish prejudice–as opposed to criticism of Israel–is extremely marginal in its ranks, amounting to some 0.08 per cent of members. It is presumably even less common among those selected to run as candidates in local and national elections.

The JLM has nonetheless prioritised this issue, threatening that the scores may be used to decide whether activists will campaign for a candidate. One might surmise that the scores could also be serve as the basis for seeking to deselect candidates and replace them with politicians more to the JLM’s liking.

“We have got elections coming up but we are not going to put that effort in unless we know people are standing shoulder to shoulder with us,” said Katz.

Paradoxically, the Jewish Labour Movement appears to be preparing to do openly what pro-Israel lobbyists in the U.S. deny they do covertly: use their money and influence to harm candidates who are not seen as sympathetic enough to Israel.

Despite claims from both U.S. and UK pro-Israel lobby groups that they speak for their own domestic Jewish populations, they clearly don’t. Individuals within Jewish communities are divided over whether they identify with Israel or not. And certainly, their identification with Israel should not be a reason to curtail vigorous debates about U.S. and UK foreign policy and Israeli influence domestically.

Even if the vast majority of Jews in the U.S. and UK do support Israel–not just in a symbolic or abstract way, but the actual far-right governments that now permanently rule Israel–that does not make them right about Israel or make it anti-semitic for others to be highly critical of Israel.

Chipping away at democracy

The overwhelming majority of Israeli Jews support a narrow spectrum of politicians, from the militaristic right to religious fundamentalists and fascists. They view Palestinians as less deserving, less human even, than Jews and as an obstacle to the realisation of Jewish rights in the whole of the “Land of Israel”, including the Palestinian territories. Does that make them right? Does their numerical dominance excuse their ugly bigotry towards Palestinians? Of course not.

And so it would be the same even were it true that most Jewish members of the Labour party supported a state that proudly upholds Jewish supremacism as its national ideology. Their sensitivities should count for nothing if they simply mask ugly racist attitudes towards Palestinians.

Lobbies of all kinds thrive in the dark, growing more powerful and less accountable when they are out of view and immune from scrutiny.

By refusing to talk frankly about the role of pro-Israel lobbies in the UK and the U.S., or by submitting to their intimidation, we simply invite Israel’s supporters and anti-Palestinian racists to flex their muscles more aggressively and chip away at the democratic fabric of our societies.

There are signs that insurgency politicians in the U.S. are ready for the first time to shine a light into the recesses of a political system deeply corrupted by money. That will inevitably make life much harder for the pro-Israel lobby.

But paradoxically, it is happening just as the UK’s Israel lobby is pushing in exactly the opposite direction. British politics is being plunged into a stifling, unhealthy silence on the longest example of mass human rights abuses, sanctioned by the west, in modern history.