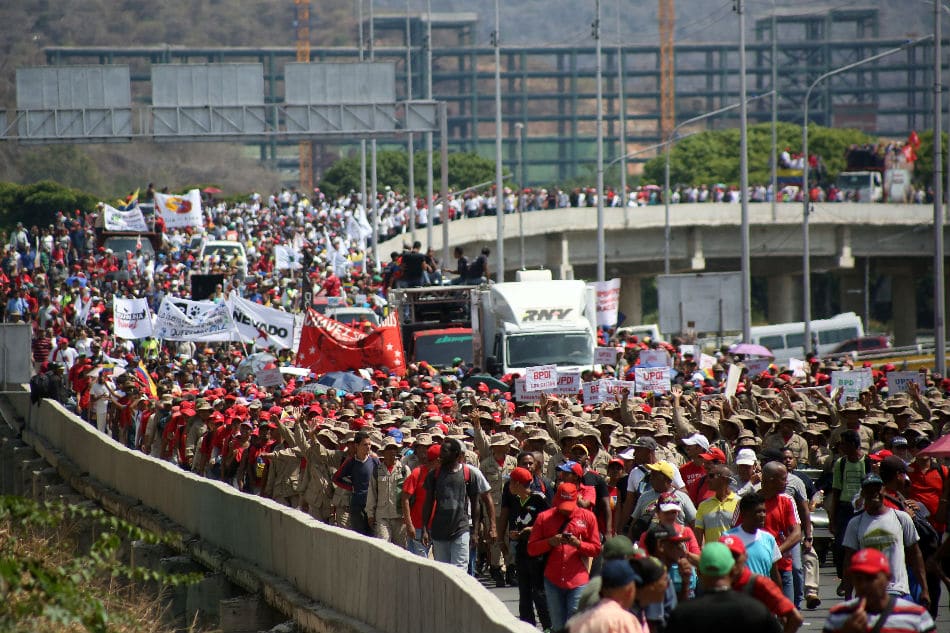 Partisans of Venezuela’s President Nicolas Maduro march in support of his government and to commemorate May Day in Caracas, Venezuela, May 1, 2019.

The following account is by our comrade, Peter Lackowski, a retired teacher living in Burlington, Vermont, who was part of a delegation on a visit to Venezuela during and after the failed right-wing coup d’état on April 30, 2019.

April 30: Caracas the day of the rightists’ failed coup

Today there was a farcical attempt to take a military airport that fizzled. It turned into a dozen or so guys throwing stones and being ignored. The Guardian is shamelessly running video of something that happened weeks ago as though it were today. We were there and it was all normal.

[Our Venezuelan friend] William was there as our witness.

Meanwhile the rest of us went to see a wonderful example of how a of a planned housing development should be done: sports facilities, day care, and much more to create a real community. A large group of young people who have been studying music […] put on a brief concert for us along with a busload of other internationals who were there for a conference on housing. The enthusiasm of the hundred or more residents who attended was evidence of how impossible it would be for the opposition to ever win an election.

The subway [in Caracas] closed early and will not open tomorrow as a precaution. Given the weak showing today it seems they will not have a big enough crowd to do much, but who knows?

Since the corporate media are making up bizarre lies, I would recommend Telesur.

Most of today our delegation was getting to and then attending the rally and so each by Maduro at the end of the march.

Our visit coincided with the conference on housing. We “internationals” were taken to bleachers set up very close to the main stage. They did not want us to actually march because they were super cautious about us so that we did not get into any problem that could be used for negative propaganda. Who knows how the U.S. government or corporate media would propagandize it?

Thus I have little to report about the competing marches except hearsay.

William went to Altamira where the opposition did not a organize march. They, however, delivered speeches. Guaido was not there. Just 3000 people. It was a very weak showing. William could not cite any figure of participants. But, Chavistas turned out far, far more people he said.

Guaido’s tricks have made him look like an incompetent fool, even to his own people, but no one expects the USA to back off. What will they do next?

The determination and spirit of the people today made it clear that they won’t give in. Maduro spoke a lot about rectification and lessons learned. But the sound system was literally deafening from our seats and it was impossible for me to understand in Spanish or to hear the translation in the earphones. I will try to find the text of his remarks. We have been treated like celebrities by everyone. This in contrast to what happened when William went to Altamira along with a journalist working with a Japanese TV crew. The Altamira crowd made nasty comments about them because they thought they were Chinese, i.e. friendly toward Maduro. There really are two different Venezuelas.

There was a very long musical program while we waited for marchers to get to us and Maduro to speak. There were many songs by Ali Primera, and since I am familiar with most of them I kept hearing up, the songs express so well the class consciousness of these brave people, their compassion, bravery, pride in their revolutionary tradition, their often expressed determination never to accept the old system that treated them as though they were less than human.

Ali Primera had a big role in creating that consciousness, and his picture is on murals all over the city (except Altamira) along with Bolivar and Chavez.

This evening we went to Catia, a part of the city that is very poor. We arrived at 7 to a meeting that started at 4. There were spokespeople from three different communes working out a plan to unite the three into one with about 100,000 people. Each commune is made up of a dozen or so communal councils that have united to create the communes. They were talking about the practical problems that they hope to address through this larger governmental unit that they are creating, things like doing a serious study of local wells and springs so they can then get funds to set up a water system. They then talked about how they need a seed bank so they can move ahead with growing food. I was so glad to have brought some honeynut squash seeds along. The blockade has affected this. They were very pleased but later a woman wanted to be sure they were not GMO. (They had earlier decided that they want to do everything ecologically.)

This meeting, run mostly by women, is part of the process of building a participatory democracy based on communes like these, a process that was just getting underway when Sharyl, Aaron and I met with people from community councils, smaller units that were then, in 2014, just starting to form communes.

This is a country that our government and media are telling us is a dictatorship!

Several times someone mentioned President Maduro with respect, citing policies that he has promoted that disperse decision-making power to these local units. Supreme dictator! In the hour or so at the end of the meeting, no one ever brought up the PSUV or any other party, and it seemed to be understood that while they considered what they were doing was part of a national process they were not following any kind of orders from above, but rather that were deciding for themselves how to govern themselves following the broad outlines in the Law of Communes.

A friend of one of our delegation joined us for dinner tonight. He is a very experienced journalist in town to facilitate the work of a crew from a Japanese TV station. They were at the Guaido rally May 1. He estimated the crowd at 2000 to 3000. He said the large number of people shown in a photo run in the corporate media must have been photoshopped. Just another one of their routine lies.

That’s it for tonight. My phone is almost out of power and so am I.

Side note on Ali Primera

As mentioned above, Ali Primera was an important cultural figure who died in the 1980s—way too young. Below is one of the songs he popularized (not sure if he wrote it or not). It is a beautiful and haunting song. Fred Magdoff has translated the song into English so others can get an idea of its power. It’s descriptive of how so many people lived in the hills surrounding Caracas, in such devastating poverty. This is why, with all the problems today in Venezuela, the poor know how far they have come, and they don’t want to return to the old ways.

May 3, 2019: At a commune in Venezuela striving for food sovereignty

We went to visit facilities for urban food production named after Fabricio Ojeda, one of the many Venezuelan revolutionary martyrs of the last century. It is a joint effort of four communes of Catia, whose total population is about 150,000 people. It is on a hill surrounded by the dramatic steep landscape of western Caracas.

We were met by commune leaders, and by the armed security people who defend the area from sabotage the right-wing opposition or other criminal elements try to carry out. There is a lot of concern about the campaign to destabilize the economy that involves destroying Chavista production facilities as well as infrastructure like the electric grid.

We were told that they [the communes] were raising pigs and chickens, and planning about going into production of a quail-like bird called the coroners; but we were there to see their rabbits.

One of the commune members explained to us that he is a municipal employee who submitted a proposal to the government for this project. He was granted a leave from his regular job, with his regular salary, to make it happen.

He took us to the cages of black and white rabbits whose descendants will provide high quality lean meat for Caracas. They are fed a combination of grass and a plant that I recognized as a member of the amaranth family similar to what we call pigweed in Vermont. They are also fed a mixture of corn meal, eggshells and a little cement, the latter two things for their calcium content. He showed us the detailed manuals he went by that covered everything about feeding at different stages of the reproductive process, how to treat illnesses, and whatever else one needs to know about keeping rabbits healthy.

There were special boxes where the females who had babies could nurse them – cute little baby rabbits, soon to grow up into a rapidly multiplying population that will be ready to harvest in about a year from now, once there are enough. When that time comes, a request will be submitted to the government to buy refrigerators and other equipment to provide meat to consumers.

As all this was being explained there was a recurring theme, the sense of urgency about developing food sovereignty, to survive and surmount the economic war that the United States is waging against Venezuela. I have a quote in my notes: “We want peace but we are ready to die to defend our country.” There is a pervasive awareness that food sovereignty is a key component in achieving national political sovereignty.

We moved on to the extensive vegetable gardens where everything was being prepared for the coming season. When we first arrived, we heard a loud, steady noise, low, like the rumble of some large machinery. We were told that it was a certain insect that makes that sound just when the rainy season begins. Once the rain starts, they stop making the noise.

Raised beds were ready, with fertilizer worked in and seedlings in flats. Many vegetables are grown, mostly ones that are in our gardens in the north. Tomatoes are their biggest crop. The last harvest came to 16 metric tons. Tomatoes are grown in structures that superficially look like greenhouses, but are actually covered with a loosely woven fabric that partially shades them from the tropical sun, which would otherwise be too much for them.

In many of the large public vegetable gardens, I have visited on past trips there has been a Cuban advisor, and there was one in this garden as well. He told us that his grandfather had been a farmer, his father was an engineer, and he is an agricultural engineer. He has been here for two years, has married a Venezuelan woman, and plans to stay here. He seemed very proud of the productivity of this garden.

As we walked down the hill away from the garden, we passed a huge gray factory with big silos, a Cargill mill for processing wheat into flour, a striking reminder of how the transnational corporations have penetrated Third World countries, and the role they still have here.

Peter Lackowski is retired teacher, resident of Burlington, Vermont, and a friend of Bolivarian Venezuela.