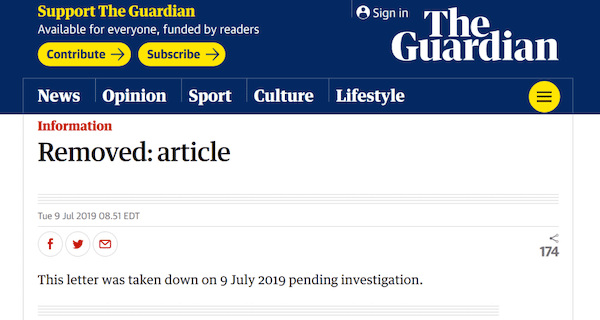 The Guardian printed, but then quickly removed the letter without explanation.

Meanwhile, the paper has refused to retract a wholly discredited article that maligned journalist and political prisoner Julian Assange which has remained on the website for more than seven months. WikiLeaks says this piece is completely false, and has pledged to sue the newspaper over it.

The retracted open letter was a defense of Chris Williamson emphasizing that the socialist and anti-imperialist MP “has a longer record of campaigning against racism and fascism than most of his detractors,” and “stands as we do with the oppressed rather than the oppressor.”

Noam Chomsky, Norman Finkelstein and many others have signed this important letter in support of @DerbyChrisW
'The mass media have ignored the huge support for Chris both within and beyond the Labour party. Support that includes many Jews.'https://t.co/wnt5d4NTkW

The Guardian of Blairism

As the British newspaper of record, The Guardian has for years been the voice of Blairite centrism. It supported the joint US-UK invasion of Iraq, along with the wars on Libya and Syria, and scarcely deviates from the Western foreign-policy consensus.

In fact, the Guardian’s deputy editor works has collaborated with the UK’s Defense Notice (D-Notice) committee, which complies with official British government requests to censor information that is deemed sensitive to “national security.” (The New York Times similarly collaborates with the US government.)

Guardian's deputy editor @paul__johnson joined state censorship D-Notice committee (run by MOD) after Snowden revelations in sop to British spooks. In board minutes, they thank him for being "instrumental in re-establishing links" between UK mil/intel and Guardian. Explains a lot pic.twitter.com/kN27T0QoMm

The Guardian has relentlessly attacked the socialist leadership of Jeremy Corbyn since he was elected head of the Labour Party in a landslide vote in 2015.

The newspaper has published a barrage of smears against Corbyn and his allies, fueling a witch hunt based on grossly exaggerated accusations of anti-Semitism.

The witch hunt against Corbyn allies

Chris Williamson has been a key Corbyn ally in Parliament, advancing a staunchly progressive anti-war and anti-imperialist politics at a time when many Blairite holdovers in the Labour Party are pushing for more aggressive and bellicose policies against Russia, China, Venezuela, Iran, and Syria.

Williamson was suspended in February after making comments which were later misrepresented by anti-Corbyn activists. He lamented that the Labour Party, which had “done more to stand up to racism is now being demonised as a racist, bigoted party.”

“I’ve got to say I think our party’s response has been partly responsible for that because in my opinion,” the MP added. “We’ve backed off far too much, we’ve given too much ground, we’ve been too apologetic.”

Williamson’s remarks were distorted by pro-war and pro-Israel activists, who tried to portray him as anti-Semitic.

Over 100 Prominent members of the Jewish community, in the UK and abroad, write to defend the Labour MP Chris Williamson amid allegations of antisemitismhttps://t.co/hMMYGrAdZP

The open letter censored by The Guardian noted that “Chris Williamson did not say that the party had been ‘too apologetic about antisemitism’, as has been widely misreported.”

The letter continued, “Such attacks on Jeremy Corbyn’s supporters aim to undermine not only the Labour party’s leadership but also all pro-Palestinian members.”

The full open letter is archived here, and reprinted in full at the bottom of this article.

On July 9, mere hours after it was published, The Guardian scrubbed the document from its website. The unexplained deletion was preceded by angry outbursts by anti-Corbyn activists, who misrepresented and distorted past comments by some of the signatories.

The newspaper left a brief note saying an “investigation” is pending, followed by a large request for donations from readers. 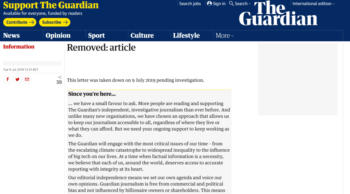 Before the letter was published, British journalist Matt Kennardreached out to signatory Noam Chomsky, who said in response to the smears against Chris Williamson, “The way charges of anti-semitism are being used in Britain to undermine the Corbyn-led Labour Party is not only a disgrace but also — to put it simply — an insult to the memory of the victims of the Holocaust. ”

“The charges against Chris Williamson are a case in point,” Chomsky explained. “There is nothing even remotely anti-semitic in his statement that Labour has ‘given too much ground’ and been ‘too apologetic’ in defending its record of addressing ‘the scourge of anti-semitism’ beyond that of any other party, as he himself had done, on public platforms and in the streets.”

The Guardian was quick to respond to the anti-Corbyn activists calling for the open letter to be censored. At the same time, the newspaper has refused to retract articles that have been proven to be false.

WikiLeaks adamantly denied the report, calling it “entirely fabricated.” Manafort himself also said it was false, as did former Ecuadorian diplomats. WikiLeaks launched a legal fund to raise money to sue The Guardian for libel.

The Guardian’s editor-in-chief Katharine Viner has refused to comment on the allegedly fake story, co-authored by Luke Harding, and after over half a year there is still no evidence to support it.

“A simple retraction and apology will not be enough,” said WikiLeaks editor-in-chief Kristinn Hrafnsson. “This persecution of Assange is one of the most serious attacks on journalism in recent times.”

(Here is the full open letter censored by The Guardian.)

We the undersigned, all Jews, are writing in support of Chris Williamson and to register our dismay at the recent letter organised by Tom Watson, and signed by parliamentary Labour party and House of Lords members, calling for his suspension (Anger over return of MP who said Labour was ‘too apologetic’ over antisemitism, 28 June).

Chris Williamson did not say that the party had been “too apologetic about antisemitism”, as has been widely misreported. He correctly stated that the Labour party has done more than any other party to combat the scourge of antisemitism and that, therefore, its stance should be less apologetic. Such attacks on Jeremy Corbyn’s supporters aim to undermine not only the Labour party’s leadership but also all pro-Palestinian members.

The mass media have ignored the huge support for Chris both within and beyond the Labour party. Support that includes many Jews. The party needs people like him, with the energy and determination to fight for social justice. As anti-racist Jews, we regard Chris as our ally: he stands as we do with the oppressed rather than the oppressor. It should also be noted that he has a longer record of campaigning against racism and fascism than most of his detractors.

The Chakrabarti report recommended that the party’s disciplinary procedures respect due process, favour education over expulsion and promote a culture of free speech, yet this has been abandoned in practice. We ask the Labour party to reinstate Chris Williamson and cease persecuting such members on false allegations of antisemitism.

And more than 100 others