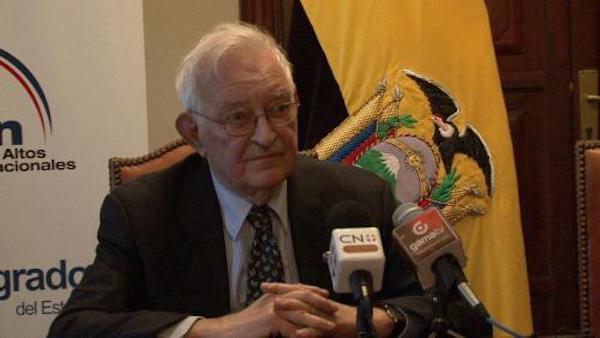 The death of Immanuel Wallerstein deprives us of an exceptional mind and an astute critic of capitalist society.(1) This is a doubly lamentable loss at a moment as critical as the present, when the international system suffers under the combined pressures of the tensions provoked by the decline of U.S. imperialism and of the systemic crisis of capitalism.

Wallerstein was an academic with a long career that extended over something more than a half century. He began with research on the countries of post-colonial Africa, in order to later begin the construction of a great theoretical synthesis on capitalism as an historic system, a task that he began in the decade of the eighties and that led to the production of a great number of books, papers for specialized journals and articles directed to international public opinion.

Wallerstein not only faithfully fulfilled the ethical principle that demands that an academic becomes a public intellectual, so that his ideas can feed into the debate that every society should have about itself and its future, but also, he followed an uncommon trajectory in the university realm. He began from a theoretical posture framed within the dominant paradigm of the social sciences of his country and with the passage of time came closer to Marxism, ending up, in his later years, with a basic coincidence with theorists such as Samir Amin, Giovanni Arrighi, Andre Gunder Frank, Beverly Silver and Elmar Altvater, among many others, on the nature of the capitalist system and its unresolvable contradictions.

His trajectory is the inverse of that of many colleagues who, critical of capitalism in their youth or in the beginnings of their university life, ended up as publicists of the right, such as Daniel Bell and Seymour Lipset, prophets of the neoconservative reaction of Ronald Reagan in the eighties, or Max Horkheimer and Theodor Adorno who, having begun their intellectual and political work in the Frankfurt School, sank to the point where they abstained from condemning the war in Vietnam. Or that of writers or thinkers who, having started out in the left camp–such as Octavio Paz, Mario Vargas Llosa and Regis Debray–went on to become spokespersons of the empire and of reaction.

Wallerstein differed from all of these, not only in the substantive area of social and political theory, but also with his active insertion in the social struggles for a better world. He was an assiduous participant in successive meetings of the World Social Forum of Porto Alegre, held conversations with [Mexican Zapatista leader] Subcomandante Marcos and other popular leaders in different parts of the world, participated in events organized by social movements, and stood out for his contributions to the epistemological discussion as revealed in his magnificent work of 1998: Open the Social Sciences. In this text, he proposes a radical critique of the methodological paradigm dominant in the social sciences, whose rigid positivist nucleus condemns these sciences to an incurable incapacity to understand the complex dialectic and historicity of the life of societies.

In line with this perspective of analysis, his projections on the course of imperialist domination could not have been more to the point. In one of his articles from the year 2011, he warned that “the vision of the United States is in decadence, in serious decadence, it is a banality. Everyone says so, except for a few American politicians who fear to take the blame for the bad news of the decadence if they discuss it”.(2)

In Latin America, on the other hand, among the dominant classes, the politicians of the establishment and the intellectual mandarins, a Hollywood-style vision still predominates on the health of the Empire, which continues to hold sway in a good part of the population. According to this perspective, Donald Trump represents the renewed vigor of the Empire and not the desperate floundering of those who resist admitting its slow but inexorable decline.

Nevertheless, there was not an ounce of infantile triumphalism in this diagnosis when he noted that even if “there are many, many positive aspects for many countries because of the decadence of the United States, there is no certainty that in the crazy rocking of the world boat, other countries can in fact benefit as they hope from this situation”. Or—we might add—those countries whose governments adopt a policy of national self-determination could benefit by maximizing their margins of autonomy in the global economy and world politics. Those who on the other hand submit to the dictates of the Empire will accompany it in its slow decline. The criminal warmongering of the Trump administration in response to the irreparable collapse of the post-war world order that had its axis in the United States, confirms the projections formulated by Wallerstein.

His prognosis on the future of capitalism is discouraging for the world bourgeoisie and their propagandists. In effect, in a conference dictated in Madrid in 2009, he sustained that “what we are seeing now is the collapse of the speculative period that took off in the seventies. Up to that point, everything in order”(3) But, he added, there is an extraordinary element and this is nothing less than “the end of the present capitalist world-system and the consequent transition towards another system. We still do not know what will take the place of capitalism because this will depend on the result of a political struggle that is still underway”. And he completes his reasoning declaring that “We can be sure that in thirty years we will not be living under a capitalist world-system. But, in which system will we live, then? It could be a system that is much better or much worse. All possibilities are open. We will find a solution when the conflict is resolved between what I call the spirit of Davos and the spirit of Porto Alegre”.

But what left little uncertainty in the thinking of Wallerstein was the evolution of a growing economic, social and cultural polarization that characterized contemporary capitalism. Concentration of wealth, knowledge and power in the hands of a few, within nations and in the international system, gave rise to the primacy of the enormous oligopoly conglomerates–in the real economy, finance, the media–the erosion of democracy, the exorbitant concentration of wealth and income and unequal access to education and the Internet.

This polarized world oppresses, exploits and excludes millions and crystalizes long-term tendencies that, far from declining, have intensified with the passing of time, confirming Wallerstein’s worst forecasts. This was his last investigation, in which I had the enormous privilege of being part of his international team of researchers, and which was published in a book whose original version, in English, appeared towards the end of 2014 and in Spanish, edited by Siglo XXI, in 2016. The title well synthesizes the findings of the different members of this working group: The world is out of joint. World-historical interpretations of continuous polarizations, 1500-2000.(4)

Given what has been exposed here, to where or to whom can we turn to nourish us theoretically and enable us to understand and transform this disjointed and chaotic world that Wallerstein’s book alludes to, going definitively beyond capitalism and leaving behind this painful and barbarous pre-history of humanity? Obviously, it is essential to read his dense and extensive work. But as he himself affirms “I have argued that the analysis of the world-system is not a theory but a protest against denied or hidden themes and against misleading epistemologies”.(5)

Much more than this is required, and in a message directed to the younger generations the master spelled it out thus: read Marx and not so much those who write about Marx. “One should read interesting persons” –he said– “and Marx is the most interesting scholar from the nineteenth and twentieth centuries. There is no doubt about this. No one is comparable in terms of the quantity of things he wrote, nor for the quality of his analysis. Hence, my message to the new generation is that it is most worthwhile to discover Marx, but one must read him, read him and read him. Read Karl Marx!”

This was one of his last counsels for understanding the nature and the dynamics of a system, capitalism, to which in 2009 he assigned two or three decades of survival. It would be a good thing if the Latin American universities would take note of this advice, given the ostracism to which the work of Marx and Marxists is usually relegated, rejected by the “good thinking” of the academy as expressions of an ideology and not as a theory and a philosophy that bring more than any other to the understanding of the world today. But as Bertolt Brecht opportunely recalled: “capitalism is a gentleman that does not like to be called by its name”, and Marxism precisely has the daring to do this, hence its marginalization in the university cloisters.

Thank you Immanuel for the insights that you have brought over so many years! Your work will not be forgotten and you will always be with us and with those who continue without a pause the historic struggle to overcome capitalism and to put an end to the domination of capital.

Translated for ALAI by Jordan Bishop

Translator’s note: the quotes originally in English have been retranslated from the Spanish.