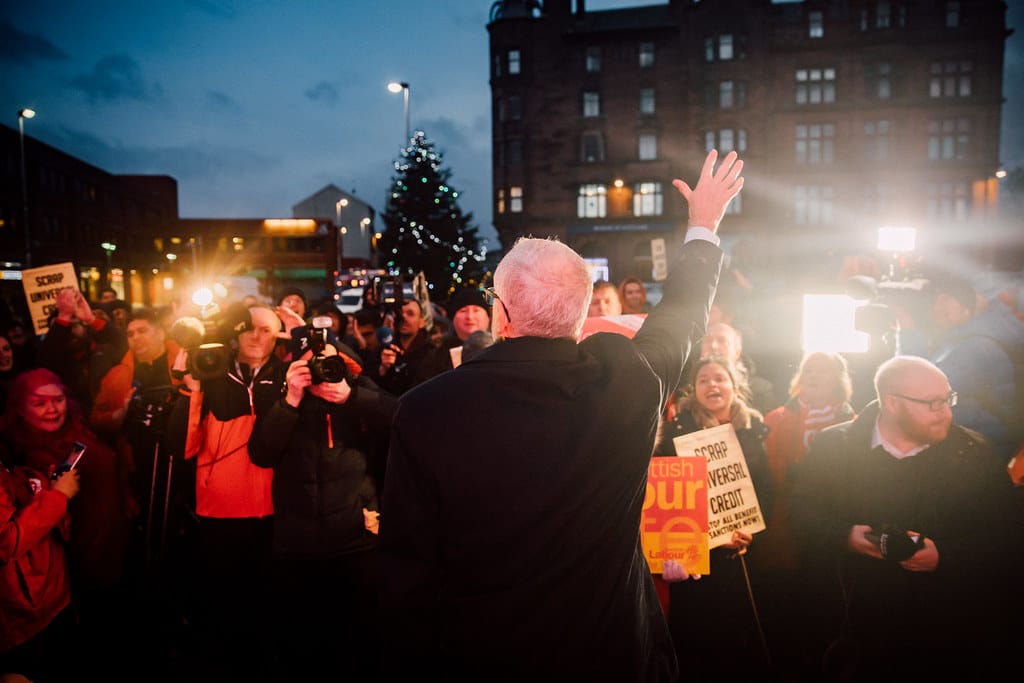 Jeremy Corbyn at a rally in Glasgow, Scotland on December 11, 2019. Credit: Jeremy Corbyn.

The business press has sounded the alarm: “Labour’s manifesto adds up to a recipe for decline.” Another article was titled “Jeremy Corbyn tax plans trigger fears of return to 1970s” while noting the Corbyn nightmare is “sparking fears across corporate Britain of a return to 1970s state intervention.” An asset fund manager in the Financial Times article notes that “the UK investment landscape will be time-warped back to the dark days of the 1970s.” Another business press article was entitled: “Labour manifesto  alarms City and business leaders.” An op-ed in the same edition accurately puts it: “Labour leader Jeremy Corbyn’s entire political strategy is built on the simple belief that he can defy the laws of political gravity.” This hysterical barrage is a clear sign of worry and desperation from the elite establishment at the thought of a Corbyn-led government, as one would expect given the class interests at hand.

Digging deeper, the assault on Labour by the elite press has certainly done its damage. A media analysis has shown that “Labour have already accumulated a substantial proportion of negative stories in the national press, with only the Conservative party showing a positive balance in the press ledger.” 53% of the British public thinks Labour’s policies are not affordable and hold more trust in Johnson’s handling with the economy.  This is unsurprising given the negative media barrage, and it shows how you get voters to believe in a person from a party that has devastated the country economically is more trustworthy, over someone who will radically improve their overall general standing.

This assault also applies to the ‘Labour antisemitism’ controversy. Jamie Stern Weiner and Alan Madison have analysed the topic with a considerable degree of substantiation. They note the claims of anti-Semitism increasing under Corbyn and claims of anti-Semitism being widespread in the Labour Party don’t stand up to scrutiny. They conclude:

This doesn’t stop the elite media from perpetuating these claims and for good reason. Not just domestically, but on foreign policy, the Labour Party will offer a different relationship towards Israel unlike the Conservative Tories who aim to ban public bodies from using “boycotts, disinvestment and sanctions against foreign countries.” 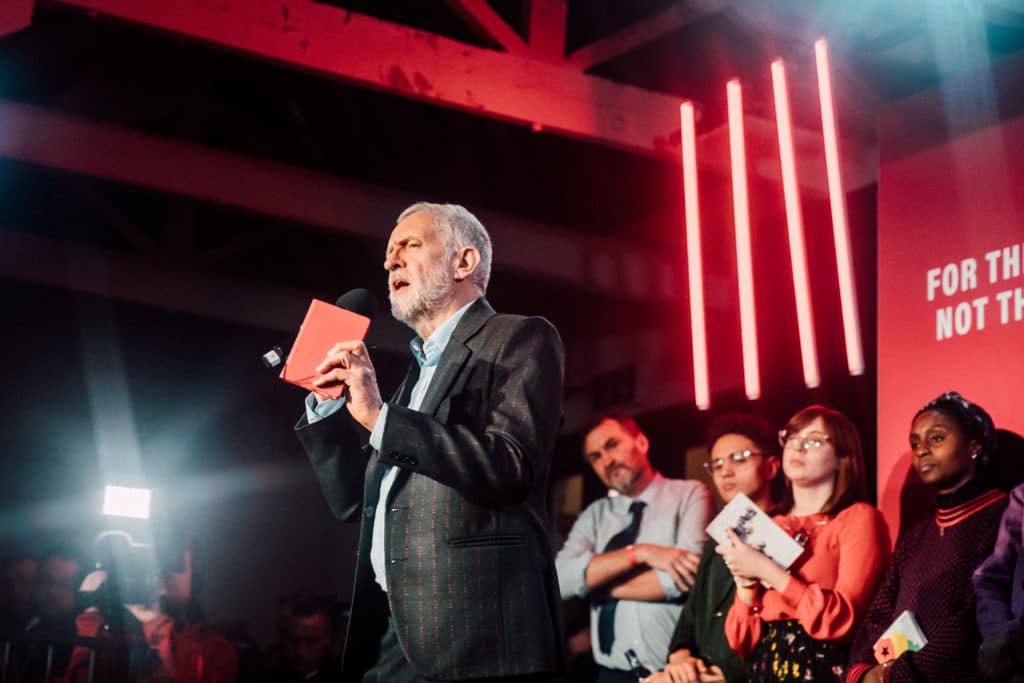 Jeremy Corbyn at a rally in Birmingham, England on December 5, 2019. Credit: Jeremy Corbyn.

Given this, the net effect is to convince the population to vote against their interests not dissimilar to the struggles of the Bernie Sanders campaign here in the U.S.  Whenever popular policies are proposed, the same question that is peddled to Bernie Sanders gets peddled to Corbyn-led Labour—how will you pay for it? This is an attempt to weaken the support of the very popular policies—de facto making the population lowers its ambition. The same is true for “politically realistic.” Political language especially economic jargon is consciously manipulated and is meant to confuse the public. It is geared towards the preference of the elite. For example, public services which serve a public good are called “giveaways,” pensions are deemed “too generous,” opposing privatisation is ideological, or a personal favourite, is progressive policy X affordable. It is standard economic Orwellianism meant to make people lower their political ambitions.

Regarding costs, climate change inaction and the neoliberal austerity project has already inflicted a high cost on the population. Britain has a plethora of issues with stagnating real wages, increasing inequality, weak productivity, financialisaton, overcrowded classrooms, rising rough sleepers, longer hospital waits with austerity bringing a loss of £3,600 per household and 1.5 million more children in poverty by 2022. These are costs the British population has paid. These policies are never deemed unaffordable.

Investing in the economy through public investment has already been done, successfully too. This is the basis of what is normally called the “Golden Age of Capitalism.” Yet, it is to be erased from memory as these types of policies don’t benefit the general public but rather the elites who have been making out like bandits the last few decades. This is why it is accurate when descriptions like “a nightmare” and “fears of return to the 1970s” are displayed across the Financial Times. It depicts a very difference society. Separating the hysterical outcry, the proposals are incidentally very moderate and “basic economic sense.” Even the head of the OECD is counseling governments to take ‘urgent’ stimulus action” with a “bold public investment” plan which could be modelled on the U.S. Defense Advanced Research Projects Agency, which…helped to spur innovation in privately owned businesses without closing down competition, and provided a template for good governance.” Given the average living standards still have yet to recover from the pre-crash levels, Labour proposed policies are set on the right direction by reversing the socio-economic erosion and the devastating assault on democracy by the elites. The scientific consensus is clear, the western countries have not much more than a decade to change their economies in a very different way. The clamour of “too radical” isn’t rooted in actual political reality.

By rewriting the tax code with financial transactions taxes, pledging to reverse the current anti-union Tory policies, pledging to give democratic decision-making power back to local councils, bringing in rent-control to the private sector, setting up an Inclusion Ownership Fund, promising to rid of zero-hour contracts, increasing the minimum wage to £10, Labour is providing a real change for the working class. All told, perhaps the best example indicating a profound change concerns a single-issue—the Chagos Islands. As the UK was criticised for defying the United Nations deadline to hand over control of the Chagos Islands, Jeremy Corbyn proclaimed he would grant the Islands sovereignty as bound by international law. He noted that “the right of return to those islands is absolutely important as a symbol of the way in which we wish to behave in international law. So yes, we will carry that out.”

The Labour Manifesto is a plan for the future not just the present. Jeremy Corbyn captured this idea by stating:

This party, this movement, this manifesto is different. If the bankers, billionaires and the establishment thought we represented politics as usual, that we could be bought off, that nothing was really going to change—they wouldn’t attack us so ferociously.

Looking across the ocean, one hopes for a Corbyn-led Britain which can undoubtedly electrify the States.   After years of neoliberalism and austerity this election is Britain’s last shot at meaningful action against this programme and climate breakdown.

Rajko Kolundzic [pronounced rai • ko] is an American university student currently a visiting student at Arizona State University, majoring in political science with the intention of finishing his degree in Britain.