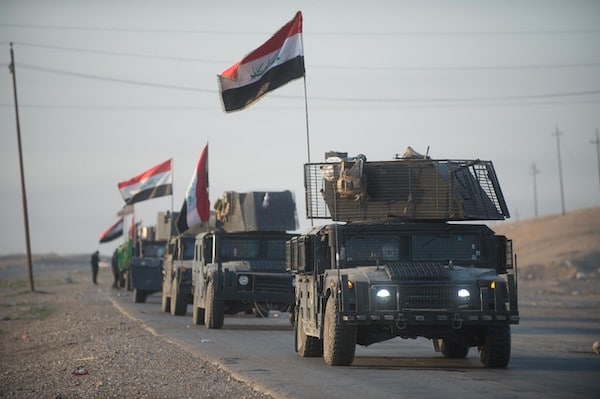 The departure of the former Quds Force commander Qassem Soleimani is beginning to be felt in Iraq. The two meetings that the U.S. President Donald Trump had with the leader of Iraq’s Kurdish Regional Government Nechirvan Barzani and the president of Iraq Barhem Salih in Switzerland on January 22 on the sidelines of the World Economic Forum are symptomatic of Washington’s agenda to press ahead with the rollback of Iranian influence in Iraq.

Barzani becomes a key interlocutor for Washington in the new circumstances who would have a major role to play in the consolidation of the autonomy of the Kurdish regions in northern Syria. Indeed, from Washington’s perspective, Iraqi Kurdistan remains an oasis of stability and can provide an anchor sheet for open-ended U.S. military presence in the region. Evacuation of the oil from eastern Syria also becomes feasible via Iraqi Kurdistan.

With Prime Minister Adel Abdul-Mahdi remaining in a caretaker position for now, Baghdad is dysfunctional and is in no position to impose authority over the northern Kurdistan region. Besides, Salih, an ethnic Kurd himself, is known to be only too keen to make himself useful to the Americans in prevailing the power vacuum.

Given the overall disarray among the Shi’ite parties and the United States’ dealings with many of them, there is no focal point presently in the Shi’ite opinion about who can channelize the latent anti-American sentiments. This is where Soleimani’s absence is most keenly felt. He had cast his net wide, cutting across regions and ethnic groups, and enjoyed the trust and confidence of his Iraqi partners. The broken bridges will take time to mend, if at all.

On January 24 a “million-strong march” took place in Baghdad. The call for the march came from cleric Moqtada al-Sadr who is a nationalist but has recently aligned himself more closely with Iran. The rally threatens to subsume and marginalize the U.S.-backed protests in recent months, which aimed at undermining Iran’s influence in Iraq.

The big question is about the future of the paramilitary that the powerful Shia militia leader, Abu Mahdi al-Muhandis (who was killed in the same U.S. strike targeting Soleimani) previously commanded—known as the Popular Mobilization Forces (PMF), a 100,000-strong force welded out of some 50 disparate militias, mostly Shia fighters but not all, within which, in reality, Iran-aligned groups likely constitute a minority. These competing factions of the PMF have a history of conflict with one another and owed fealty to a range of allegiances.

Al-Muhandis was the master craftsman who created the PMF, under the direct watch of Soleimani. Iran will find it impossible to recreate the leadership these two titanic figures gave to the Resistance front in Iraq. Will the PMF remain a powerful political faction or become prey to predatory forces in the uncertain times ahead? In the absence of an effective central command, contentious succession battles may even erupt between Iran-aligned groups within PMF and al-Sadr’s bloc.

In the chaotic situation that is developing in Iraq, it seems impossible for Iraqi politics to return to the status quo. This also seems to be the hidden U.S. agenda. The U.S.-backed protesters have rejected new prime ministerial candidates and are demanding an end to the corrupt political system divided along sectarian lines. It infinitely complicates the selection of a new prime minister. The logjam suits the U.S. since the political system dominated by notoriously corrupt parties is tied to Iran, although it was the creation of Washington during the period of the occupation.

There is a growing risk that the meltdown of the Iraqi state can also lead to a replay of history. It was similar to chaotic conditions that led to the Ramadan Revolution in February 1963 (the military coup by the Ba’ath Party’s Iraqi Wing), which was allegedly supported by the U.S. Central Intelligence Agency. Trump will be undoubtedly pleased with such an outcome.