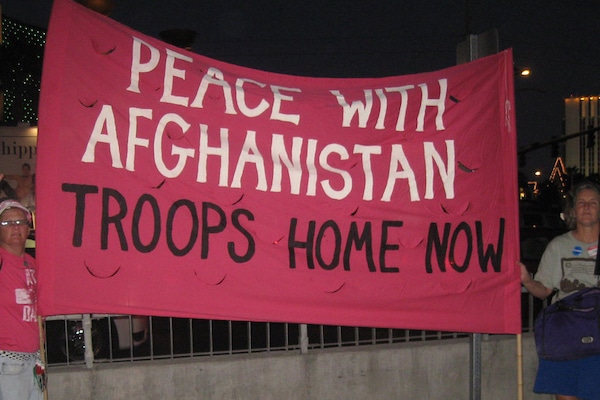 In an extraordinary statement titled “On the Political Impasse in Afghanistan,” Washington has admitted to the failure of Secretary of State Mike Pompeo’s mission to Kabul on March 23, which was taken up to heal the political rift among Afghan politicians and to urge them to form an inclusive government so as to implement the peace agreement signed in Doha on February 29.

In exceptionally strong words, Washington flagged its disappointment over the political rift between the factions led by Afghanistan’s President Ashraf Ghani and former chief executive Abdullah Abdullah respectively, which has “harmed U.S.-Afghan relations and, sadly, dishonors those Afghan, Americans, and Coalition partners who have sacrificed their lives and treasure” in the 18-year-old war.

Soon after the failure of Pompeo’s mission became clear, the state department disclosed that the Trump administration is cutting back its aid to the Afghan government—“a responsible adjustment to our spending in Afghanistan” by $1 billion immediately in 2020 and another $1 billion next year—and will also “initiate a review of all of our programs and projects to identify additional reductions, and reconsider our pledges to future donor conferences for Afghanistan.” A calibrated Plan B with President Trump’s approval is unfolding, for sure.

We have made clear to the [Kabul] leadership that we will not back security operations that are politically motivated, nor support political leaders who order such operations or those who advocate for or support parallel government.

However, the state department statement leaves the door open to “revisit the reviews initiated,” provided the Afghan leaders “choose to form an inclusive government that can provide security and participate in the peace process.”

The alacrity with which this statement has come implies that U.S. President Donald Trump directed Pompeo to convey to the Kabul elite that his patience has run out and to reiterate that no matter the shenanigans of Afghan politicians,

We are proceeding with the conditions-based withdrawal of our forces in accordance with the U.S.-Taliban agreement.

This is the nearest Trump has come to threatening that if push comes to shove, he may unilaterally end the war and wash his hands of it.

Evidently, Washington is calling Ghani’s bluff. Ghani bragged recently that Kabul has the necessary resources to carry on for at least two years even without any U.S. assistance, signaling his grit to dissociate from the U.S.’s peace talks with the Taliban.

On its part, Washington has put Ghani on notice that if the game plan of the hardliners in his circle is to precipitate security situations with a view to drag the U.S. military into violent confrontations with the Taliban and thereby destroy the understanding forged painstakingly through the negotiations in Doha during the past year and more, that won’t happen.

Equally, Washington has distanced itself from the political rift between Ghani and Abdullah by making it clear that it has no favorites.

The startling development has three dimensions to it. First and foremost, will the Trump administration’s shock therapy have a sobering effect on the rival Afghan factions locked in a struggle for power?

The answer is, unfortunately, that such a probability is unlikely to happen as per current indications—given the vaulting ambitions of the protagonists. Both Ghani and Abdullah also have associates who would have their own agenda.

With that being said, Afghans also have a great tradition of reaching compromises and consensus at the last minute before an irrevocable breakup. Such a fortuitous turn of events can happen in the present circumstances only if Ghani accepts a coalition government with power-sharing of key security portfolios.

Arguably, the struggle may even take an ugly form and become “physical” unless great self-restraint is exercised. There are ominous reports that the warlords have come out of the woodwork and are marshaling their militia.

The government also commands shadowy militia groups beyond the pale of law who have been trained by the U.S. to function as a state within the state. Indeed, Afghanistan has a violent history, and its democratic temper is only skin-deep. Peaceful transfer of power is a recent phenomenon under the U.S. diktat.

Second, what will be the impact on the security situation? The critical factor here is that, undeniably, there are ethnic undertones to the Ghani-Abdullah political rift, and how they might impact the cohesion of the Afghan army and security forces is anybody’s guess. Of course, the U.S. has been bankrolling the Afghan army.

Looking back, it was former Afghanistan President Mohammad Najibullah’s inability to pay the salaries of the Uzbek militia guarding Kabul city in the critical period since the Soviets withdrew aid that ultimately became a clincher for the leader of the Uzbek ethnic minority in Afghanistan Abdul Rashid Dostum’s treacherous defection to the Mujahideen camp of Ahmed Shah Massoud. That, in turn, resulted in the roof coming down on the communist regime.

Third, how will the Taliban react to these big shifts in the politico-military alignment? Clearly, the Taliban is already at peace with the U.S. forces. Strict orders have been given to the commanders not to engage with the U.S. military.

Thus, the state department’s assurance that the U.S. military will not be party to any conspiracies by the hardliners in Kabul to precipitate confrontations with the Taliban becomes important. In good measure, Pompeo also flew to Doha to meet the Taliban leaders to discuss the current impasse. The Taliban will make careful note of Washington’s eagerness to stick to the Doha pact—and it will reciprocate.

Now, if Ghani resorts to delaying tactics much longer in releasing the Taliban, it may provoke the Taliban into ending the current (tacit) ceasefire and step up its operations against the Afghans’ security forces with a view to demoralize them.

There are also indications of the Taliban having infiltrated the Afghan army and police and security agencies.

Suffice to say, it will come as a surprise if the Taliban does not take advantage of a most conducive situation arising in Afghanistan—a rump administration ruling the roost in Kabul, lacking in political legitimacy (and the U.S. distancing from it); the grim political struggle for supremacy amongst the Afghan factions that may take a violent form; the chain of command of Afghan forces coming under stress due to the ethnic fissures; and, the strong possibility of Trump unilaterally extricating the U.S. out of the war at some point in the near future.

The big question is whether the Taliban will be savvy enough to wait for Kabul to fall like a rotten apple or will hastily pluck it like a low-hanging fruit.

The bottom line is that the Taliban (and Pakistan, which mentors it) would see that the political ascendance of the Taliban in Kabul, whenever it is due, happens with international legitimacy. The Trump administration’s stated preference still is to reach a negotiated peace settlement as envisaged under the Doha pact through intra-Afghan dialogue. And the Taliban too adheres to the Doha pact.

It is unlikely that the Taliban will opt for a decision to grab power through force. The preference at this stage will be to pitch for an interim government that is inclusive so as to carry as many Afghan factions as possible.

Make no mistake that time works in the Taliban’s favor. Unlike in the past, the Taliban has networked extensively with the international community in recent years—especially with the major regional states—and its interest lies in securing world recognition for any future government under its leadership.