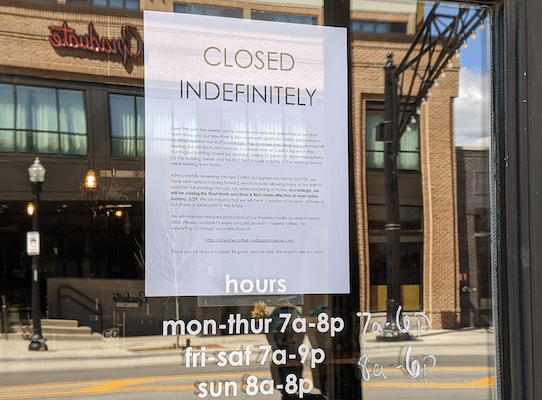 We shouldn’t be satisfied with a return to normalcy. We need a “new normal.”

We are now in a recession, one triggered by government ordered closures of businesses producing nonessential goods and services, an action taken to limit the spread of the coronavirus. In response, Congress has approved three stimulus measures which legislators hope will keep the economy afloat until the virus is contained and companies can resume business as usual.

Many people, rightly criticizing the size, speed, and aims of these measures, have called for a new, improved stimulus package. But what is getting far less attention, and may be the most important thing to criticize, is the notion that we should view a return to normalcy as our desired goal. The fact is we also need a new economy.

The old normal only benefited a few

The media, even those critical of the Trump administration, all too often showcase economic experts who, while acknowledging the severity of the current crisis, reassure us that economic activity will return to normal before too long. But since our economy increasingly worked to benefit a small minority, that is no cause for celebration.

Rarely mentioned is the fact that our economy was heading into a recession before the coronavirus hit. Or that living and working conditions for the majority of Americans were declining even during the past years of expansion. Or that the share of workers in low-wage jobs was growing over the last fifteen years. Or that Americans are facing a retirement crisis. Or that life expectancy fell from 2014 to 2017 because of the rise in mortality among young and middle-aged adults of all racial groups due to drug overdoses, suicides, and alcoholism. If existing patterns of ownership and production remain largely unchanged, we face a future of ever greater instability, inequality, and poverty.

The failings of our current system are only accentuated by the crisis. Many analysts are predicting an unprecedented one-quarter decline in GDP of 8 percent to 10 percent in the second quarter of this year. The overall yearly decline may well be in the 5-7 percent range, the steepest annual drop in growth since 1946.

The unemployment rate is soaring and may reach 20 percent before the year is out. A recent national survey found that 52 percent of workers under the age of 45 have already lost their job, been placed on leave, or had their hours cut because of the pandemic-caused downturn.

Our unemployment insurance system has long been deficient: benefits are inadequate, last for only short period of time, and eligibility restrictions leave many workers uncovered. As of year-end 2019, the average unemployment insurance check was only $378 a week, the average duration of benefits was less than 15 weeks, and fewer than one-third of those unemployed were drawing benefits.

Now, the system is overwhelmed by people seeking to file new claims, leaving millions unable to even start their application process. Although recent federal legislation allows states to expand their unemployment insurance eligibility and benefits, a very large share of those losing their jobs will find this part of our safety net not up to its assigned job.

A better crafted stimulus is needed

In response to the crisis, policy-makers have struggled to approve three so-called stimulus measures, the March 2020 Coronavirus Aid, Relief, and Economic Security (CARES) Act being the largest and most recent. Unfortunately, these efforts have been disappointing. For example, most of the provisions in the CARES Act include set termination dates untied to economic or health conditions. Approved spending amounts for individuals are also insufficient, despite the fact that Treasury Secretary Mnuchin believes the $1200 provided to most Americans as part of the CARES Act will be enough to tide them over for 10 weeks.

Also problematic is that not all CARE funds are directed to where they are most needed. For example, no money was allocated to help states maintain their existing Medicaid program eligibility and benefit standards or expand health care coverage to uninsured immigrants and those who lose their job-based insurance. And no money was allocated to state and local governments to help them maintain existing services in the face of declining tax revenues. Perhaps not surprisingly, the largest share of CARES approved spending is earmarked for corporate rescues without any requirement that the funds be used for savings jobs or wages. In sum, we need another, better stimulus measure if we hope to minimize the social costs of our current crisis.

Even a better stimulus measure leaves our economy largely unchanged. Yet, ironically, our perilous situation has encouraged countless expressions of social trust and solidarity that reveal ways to move forward to a more humane, egalitarian, and sustainable economy. This starts with the growing recognition by many Americans that social solidarity, not competitive individualism, should shape our policies. People have demonstrated strong support for free and universal access to health care during this crisis, and we can build on that to push for an expansive Medicare for All health care system. People also have shown great solidarity with the increasingly organized struggles of mail carriers, health care workers, bus drivers, grocery shoppers, cashiers, and warehouse workers to keep themselves safe while they brave the virus for our benefit. We can build on that solidarity to push for new labor laws that strengthen the ability of all workers to form strong, democratic unions.

There is also growing support for putting social well-being before the pursuit of profit.   Many people have welcomed government action mandating that private corporations convert their production to meet social needs, such as the production of ventilators and masks. We can build on this development to encourage the establishment of publicly owned and operated industries to ensure the timely and affordable production of critical goods like pharmaceuticals and health care equipment. And many people are coming to appreciate the importance of planning for future crises. This appreciation can be deepened to encourage support for the needed transformation of our economy to minimize the negative consequences of the growing climate crisis.
We should not discount our ability to shape the future we want.