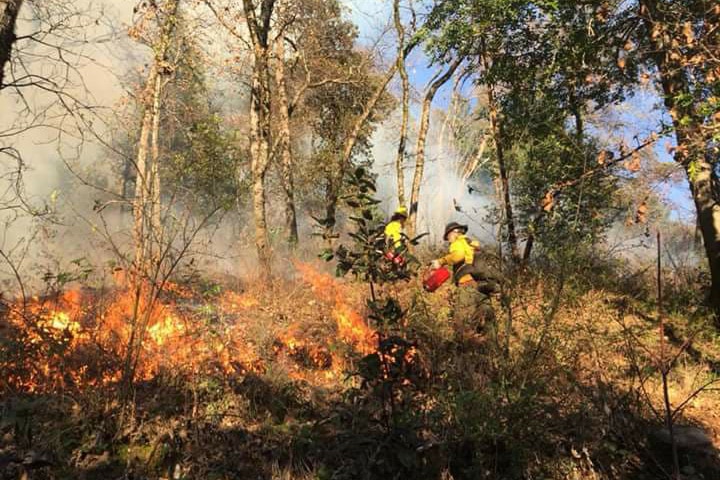 California is experiencing yet another year of calamitous conflagrations producing human fatalities, home destruction, and hazardous air quality that could be prevented by radically restructuring land management to prioritize Indigenous approaches and objectives. Political sound bites pit climate change against forest management as the source of the disaster. Republicans emphasize the claim that California’s forests need more management to reduce woody fuels that encourage fire spread, but their management rhetoric masks their ulterior motives to thin forests in support of the timber industry, and their record of limiting federal funding for forest restoration. On the other hand, California Democrats emphasize the effects of climate change to critique Republican denialism, and they also recognize that changes to forest management are necessary.

Not surprisingly, neither the State of California nor the Federal government discuss the effects of colonialism or capitalist timber extraction on the wildfire crisis. Indigenous-set, prescribed fires attenuated the spread of wildfire by reducing woody fuels across California. Industrial timber extraction and fire suppression have contributed to unprecedented fuel accumulations. Today, Indigenous Tribes and organizations are leading efforts to revive prescribed fire and restore forests, yet their solutions are not being supported at a necessary scale. Without a long-term commitment to supporting Indigenous initiatives and sovereignty, we will continue to see explosive fire growth amplified by unprecedented temperatures and drought.

Preceding colonialism, Indigenous cultures applied fire at a large scale and at high frequency (e.g., every 2 – 5years) to eliminate fungal and insect infestations in acorns, which are historically at the foundation of their diet. They burned to enhance the production of basketry materials and berries, and to improve forage for deer and elk. By burning woody fuel accumulations, California Indians not only improved their ability to see and move across the landscape, but they also reduced the ability of unintentional fires to spread rapidly and intensely. This is a core tenet of Indigenous and Western fire science: where there is limited and discontinuous fuel, fires spread more slowly and at lower intensities, if at all.

Western foresters who shaped California and Federal fire policy in the early 20th century arrogantly believed they could exclude fire from the landscape to protect standing timber, and support timber regeneration to sustain timber yields for American empire[1]. They used white supremacist narratives to denigrate Indigenous fire practices. Indigenous burning practices were derisively called ‘Paiute burning’ by US Forest Service leaders to discourage settler adoption of prescribed burning, and to promote fire exclusion policies. In 1920, Henry Graves, the second US Forest Service Chief, contended that Indigenous burning for forest protection was a fallacy, and “far from consistent with the[ir] relatively low stage of cultural development”[2].

Lack of Funding and Sprawl are a Dangerous Mix

Federal and state governments now belatedly acknowledge that prescribed fire is a necessary tool to mitigate wildfire spread and to restore ecological communities, but have never invested to implement frequent prescribed burning at a sufficient scale. Federal budgets before 2020 routinely allocated funds meant for prescribed fire and other forest restoration to pay for suppression instead. Decades of fire suppression invested in an industrial complex with huge expenditures in equipment (e.g., planes, fire vehicles) and a reliance on prison labor to protect the expansion of homes in what is called the Wildland Urban Interface (WUI).

The WUI is an expansive term that describes areas where human (infra)structures are constructed within fire-adapted ecosystems. In parts of California the WUI is an unwieldy matrix of homes designed without basic fire protections that expanded when capitalists and county governments realized that cut-over timberlands were more lucrative as subdivisions[4]. The WUI relies on a privatized electrical infrastructure that has become dilapidated and is one of many new sources of unintentional fire starts. This infrastructure supports vacation homes as well as low-income housing that attracts people trying to find respite from California’s housing crisis and the ecological alienation produced by urban life. Absentee property ownership, limited funds, and new land uses focused on recreation and tourism make the coordination of prescribed fire and other fuel reduction methods onerous.

One solution to sprawl is to discourage post-fire re-building in the WUI, but county revenue structures and the real estate industry do not favor such re-zoning and planning. In the absence of major planning reforms, there are successful examples of mitigating wildfire in the WUI that can be replicated. Indigenous groups are at the forefront of these efforts using prescribed fire, and their longstanding land tenure in California shows that policies to prevent re-building could re-produce dispossession.

In the Klamath basin of Northwest California, Karuk and Yurok Tribal members are leading a regional resurgence of prescribed burning to revitalize Indigenous culture, maintain spiritual practices, and to protect homes. They recognize that the scale of the problem requires extensive partnerships. Karuk wildland fire leader Herman Albers states that there are “two million acres that we want to treat and restore and we can’t do it alone. If we are trying to do it ourselves it’s going to take too much time”.

Karuk and Yurok Tribal members have maintained small-scale prescribed cultural burning through the years, retaining their expertise in fire science despite its criminalization, and choosing to risk fines and imprisonment to ensure ancestral fire knowledge was passed on. In recent decades, Indigenous basket weavers and other cultural practitioners have pressured the Forest Service and other land managers to maintain prescribed burning to enhance ecocultural resources. Since 2013, the Karuk Tribe has initiated a partnership with the Forest Service and environmental NGOs to expand prescribed fire throughout their ancestral territory. They use federal funds for wildfire risk reduction to provide dozens of jobs for Tribal and community members to plan and implement prescribed fire.

This initiative is an example of a “caretaking economy” that could be supported by the Red Deal proposed by the Red Nation across Indian country. Jackie Fielder, an Indigenous socialist California senate candidate, recently highlighted the Karuk initiative as a model for supporting Indigenous sovereignty, economic development and fire resilience throughout California. She would like the state to develop a plan with Tribal leadership to “expand [Indigenous] land management practices beyond the boundaries of tribal lands, [create] a jobs program for tribal members and non-tribal members, and necessary funding or policy changes to make that possible”.

Yurok Tribal members are also taking advantage of new funds and land acquisitions to expand prescribed fire through the Tribe’s wildland fire department and a grassroots entity called the Cultural Fire Management Council. The Council supports cooperative and family-led burning through collective resources and equipment to reduce overhead costs and bureaucratic processes associated with government-sponsored burning. This cooperative burn model is also being replicated by non-native rural land owners throughout California in counties like Humboldt, Plumas and Sonoma, and is influenced by successful prescribed burn associations in the American Mid-West. It augments efforts to increase fire professionals by training community members to safely burn on their own to increase fire resilience.

Indigenous peoples remain disproportionately affected by wildfire destruction, as evidenced by the recent destruction caused by the Slater Fire, in Happy Camp, California, where the Karuk Tribe is headquartered. Decades of prescribed fire planning around the town and Tribal lands were never implemented at scale due to extensive state and federal bureaucracy, and insufficient funding. Governance and resources should be transferred to those communities who have spent decades planning for wildfire, to prevent future disaster. Ongoing demands for Tribal sovereignty and land restitution, paired with the development of a new prescribed fire workforce, can begin to heal this land from the conflagrations produced by 250 years of colonialism and capitalist exploitation. “We need to renew our relationship with fire,” says Karuk leader Chook-Chook Hillman, “the clock is ticking”.

[1] Hudson, M., 2011. Fire management in the American West: forest politics and the rise of megafires. University Press of Colorado.

Tony Marks-Block is an assistant professor at California State University, East Bay. He can be contacted at tony.marksblock@csueastbay.edu