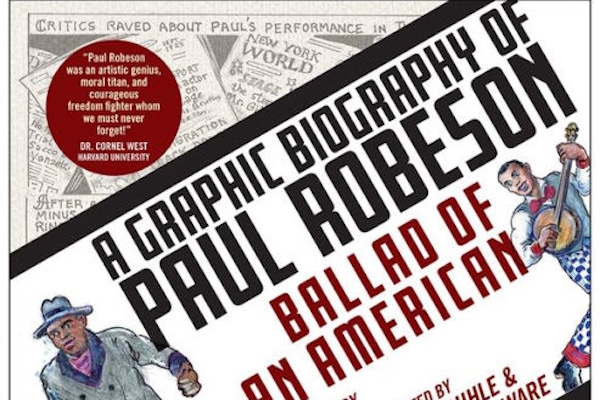 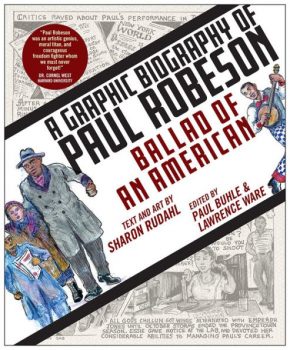 Ballad of an American has measured and judged the achievements of a great and controversial man in a manner that honestly addresses both his public contributions and personal contradictions. Artist Sharon Rudahl, historian Paul Buhle, and philosopher Lawrence Ware have produced a graphic and textual history of Paul Robeson that is a fine, objective, and powerful assessment of his place in U.S. history

Ballad of an American, released in 2019 on the 100th anniversary of Robeson’s graduation from Rutgers University, brings his creative and powerful historical presence to life through Rudahl’s striking graphic text and Buhle’s and Ware’s excellent afterword.

Rudahl’s review of Robeson’s life is a needed antidote to the long and shameful efforts to erase his legacy and drop him down Orwell’s memory hole of history. Son of a slave who escaped bondage and fought with the Union Army, Robeson’s life was rich in outstanding achievements. He was an excellent high school student who obtained the highest score in New Jersey on a competitive exam for Rutgers University, where he won an oratory prize all four years and was inducted into Phi Beta Kappa. Valedictorian of his graduating class, he then obtained a law degree from Columbia University.

He lettered in four sports at Rutgers, baseball, basketball, track and football, an extraordinary feat accomplished decades later by the legendary Jackie Robinson at UCLA. Robeson became a renowned actor and singer who at the peak of his career appeared throughout the world. He combined his artistic achievements with his anti-racist, anti-fascist, and anti-imperialist activism in this country and abroad in the face of decades of racist and political persecution. He sang and spoke at benefits on behalf of Loyalist forces in the Spanish Civil War, Welsh miners, U.S. workers suffering the deep effects of the Great Depression, anti-colonialism in Africa, world peace, and the union movement.

Rudahl’s visual/textual journey through Robeson’s life does not shy away from personal contradictions, anguish, and struggles that included depression in his later years. The latter was likely influenced by head injuries sustained playing college and professional football as young man, and the persecution threats he faced for his steadfast opposition to racism and imperialism. The Buhle-Ware analysis explores these issues and conflicts within a larger historical context of Robeson’s antiracist and antiwar politics and activism.

These efforts were essentially curtailed after the Cold War began in 1945. The State Department revoked his passport and ruled that his international travel “would be contrary to the interests of the United States.” He was thus unable to perform and speak abroad for many years. At the height of his artistic and political achievements, he was across the world the most admired and revered American—as would be the case for Dr. King decades later. Despite their international reputation, both men were bitterly denounced at home—as King found out after his courageous and historic “Beyond Vietnam” oration in 1967 at New York’s Riverside Church. He and Robeson suffered vile attacks as a result of their courageous opposition to deep-seated anti-Communism, racism and militarism.

Editors Buhle and Ware close their afterword with historian, journalist, and socialist C.L.R. James’s accurate and moving insight on Robeson’s life and work for justice and peace, and the price he paid for keeping his “eyes on the prize.” Robeson had “committed himself completely” to freeing “the Black people in the United States from the evils of imperialism and capitalism in general … [and to] making America a place where all [men and women], Black and white, could live in peace.” For that goal, he sacrificed a grand career:

that a man of such magnificent powers and such reputation gave up everything… such is the quality which signifies the truly heroic figure.

I can’t name a single major celebrity today in the film, music, or theater arts who can compare with Robeson, especially when it comes to an internationalist critique of U.S. crimes abroad that have brought death and devastation to tens of millions of people in endless wars, mostly of color.

I will close by simply sharing the words of Democratic Socialist and public intellectual Cornel West: Like his deeply admired musical giant John Coltrane, West hits all the right notes when he asserts that “Paul Robeson was an artistic genius, moral titan, and courageous freedom fighter whom we must never forget.”

John Marciano is professor emeritus of education at the State University of New York, Cortland, and the author of The American War in Vietnam (Monthly Review Press, 2016).