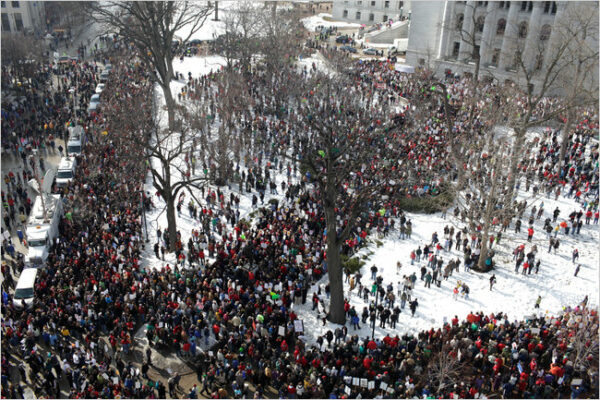 The Wisconsin Uprising of 2011 had its origin on August 3, 1981when president Ronald Regan fired the 11,000 striking Air Traffic Controllers. The vast majority were never allowed to work again as air traffic controllers.

The AFL-CIO was slow to react, in part because the Air Traffic Controllers union had endorsed Ronald Reagan over Jimmy Carter for president. However, starting almost immediately, local unions and labor councils across the country began to demand action. Within about two weeks, more and more unions coalesced around the idea of a massive solidarity demonstration to be held in Washington D.C. on September 19th 1981. The local I belonged to at the time , IUE Local 201, representing workers at General Electric in Lynn MA, put up the original money to rent trains from Boston to DC.

Thousands participated in the Sept. 19 demonstration. In a show of support, the AFL-CIO rented the then-new D.C. subway system for a day to provide free rides for the marchers.

However, there was almost no on-the-ground follow up or work actions, and no coordinated response from other unions in the industry especially pilots.

Direct action opportunities did exist: As we demonstrated in Boston, it would have been easy to block the access roads to the airports—the car driven by myself and a colleague experienced engine failure just as we got to a 4-way intersection on the road to the airport. But our efforts and some similar disruptions at other locations remained the exception.

In the years following, corporations went on the offensive against private sector unions, demanding concessions and proposing contracts slashing pay and benefits. Workers at corporations like Greyhound and Hormel Co. were forced to strike, and lost. The American labor movement was on the defensive. With a few exceptions—the Teamsters strike against UPS in 1997 and the anti-free trade battle of Seattle in 1999—during most of the 20 years following the air traffic controllers’ strike, labor did not demonstrate a strong ability to resist concessions or deal effectively with increasing capital mobility.

By 2010, governors like Scott Walker of Wisconsin and Mitch Daniels of Indiana had formed a new offensive, now threatening to bust public sector unions. In Wisconsin, Walker and his political allies pitted private sector workers who had lost pensions and insurance, or had none to begin with, against public sector workers, who did.

Sensing that the public sector unions were politically vulnerable, Walker took action, announcing on February 11, 2011 the evisceration of collective bargaining in the form of a law known as Act 10.

Just like in 1981, there was a huge outpouring of support for public sector workers and their unions. Thousands marched. The Teaching Assistants Association, representing graduate student workers at the University of Wisconsin, initiated a peaceful occupation of the capitol that lasted several weeks.

With thousands at the Capitol, the state leadership of the public sector unions was meeting across the street from those demonstrating. But these union leaders never actually met with the protest leaders occupying the capitol. Public sector unions continued to emphasize only the political with AFSCME continually polling to assess public opinion rather than developing a strategy to shift the terms of the discussion or taking steps to actually mobilize their members for some kind of organized workplace centered response.

The Wisconsin Education Association Council,, a statewide association of teachers’ unions, did make a successful effort to reach every teacher in the state but it was with a message not to engage in any work stoppage, and instead to only come to Madison to demonstrate on the weekend. This, in spite of the fact that the WEAC-affiliated Madison Teachers Inc., had figured out a strategy to close the schools. AFT-Wisconsin, with thousands of members within walking distance of the capitol, never even asked their members to think of taking a long lunch, just as a show of force so that the Republicans would have an idea of the value of state workers. There was not even a union sign-up sheet at the march.

Instead, all official mobilization efforts focused on organizing a recall of the governor—which lost. Once again, the labor movement and supporters showed that we could mobilize on the street- but were fearful of or incapable of mobilizing in the workplace.

The struggle of 2011 looked a lot like those of 1981: a great demonstration, obvious widespread public support for the workers, but absent a strategy beyond political mobilization and a refusal by union leadership to creatively mobilize at the work site. One cannot say that victory would have been achieved had there been workplace actions – but it was perfectly clear that without the workplace mobilization, the Republicans had no desire to change their minds.

On March 12, 2011 the Republicans controlling the Wisconsin Legislature passed their legislation. Collective bargaining in the public sector was gutted. Unions were not outlawed because freedom of association, the first amendment to the Constitution, is still in effect in Wisconsin.

After 10 years, what is the situation in Wisconsin?

In order to remain a certified bargaining agent, unions are required to hold recertification elections in which 50% of all members of the bargaining unit must vote to recertify, every single year. This means that unions are forced to expend resources to turn out as many members as possible to an election determining the fate of the union.

The subjects covered by collective bargaining are narrowed, and wage increases are capped at the rate of inflation. Unions cannot collect fees through direct paycheck deductions, through any public employer, reducing the amount of dues collected and by extension, union budgets.

Given these circumstances, many workers simply do not participate in, or contribute to, the unions representing them: In Wisconsin, the AFT lost close to 90% of its largest state unit. AFSCME has also experienced significant losses at the state level and considerable losses at the county and city level.

The single largest number of organized workers before Act 10 was K-12 teachers and support staff, most of who were in the Wisconsin Education Association Council. Because they are organized on a school district by school district level many of their locals were able to maintain themselves and so total WEAC membership is a bit more than 50% of the prior membership.

There are some positive exceptions such as Madison Teachers Inc. which as close to 90% of its former members.

Workers at state hospitals like UW had their rights to collectively bargain eliminated completely, essentially destroying the nurses’ union at UW Hospital. UW faculty and academic staff which had just won bargaining rights in 2008 were likewise shorn of those rights. The Teaching Assistants chose not to certify under the new rules. However even though they have suffered considerable membership erosion they have a significant functioning organization, in part because they never abandoned their culture of continuous organizing and membership mobilization. United Faculty and Academic Staff, which essentially never had bargaining rights except for a 12 month period found itself back where it had been from 1938 until 2008, with a couple of hundred members.

In the most basic sense, public sector workers found themselves back in the 1960ies- some had collective bargaining rights, but with a very narrow scope, all the locals were under extreme financial pressure, and none had the ability to initiate direct action in the workplace.

Finally, taking advantage of the weakened labor movement, and in violation of the promises he made to the building trades, Governor Walker initiated the passage of a right to work law, further weakening private sector unions. The combination of public sector union demise and the continuing weakening of private sector unions makes it much more difficult to build locally based organizations that can successfully challenge incumbents and flip the state legislature, to make it more responsive to the majority by reducing gerrymandering.

The weakness of Wisconsin public sector unions with their commitment to increasing voter participation has enabled the GOP to mount continuing and often successful attacks on the franchise itself, consistent with their long term objectives of reducing the power of working people.

Wisconsin working people are at a crossroads. If we are to regain rights at the workplace and become organizations that the employers have to meet and confer with, we are going to have to figure out ways to show the employer how valuable we are. Targeted direct action actions at the workplace are one way to do that. Working to rule almost always gets the employers attention for it to be effective a relatively high level of commitment and organization is necessary. Tactics like this are particularly effective given the lean staffing models favored by employers. In the absence of the ability to control the workplace and even with an effective, purely political mobilization, there is little likelihood that the balance of forces will change.

Long-time labor and peace activist Frank Emspak has written extensively about labor issues, especially how new technologies could be designed to serve people, not just profit.
View all posts by Frank Emspak →