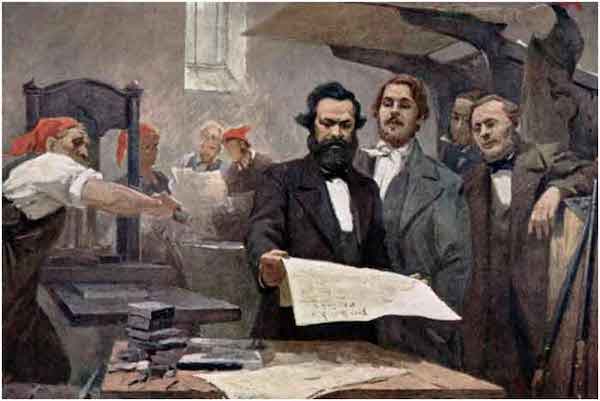 Karl Marx’s 1859 preface to A Contribution to the Critique of Political Economy1 represents one of the clearest reflections of the development of his and Engels’ thought. In what amounts to a short four and a half pages, Marx concisely exhibits the resulting conclusions of more than two decades worth of studies–from his first encounter with the economic question in 1842-3 via the polemic over landed property and forest theft, to the latest decade and a half painfully spent in the British Museum in London (except for the short interruption of the 48 revolutions) divided between the political writings for the New York Tribune and his economic studies for this text and for Capital, which this text is a dress rehearsal for. Although endless work can be done on these four and a half pages, I would like to limit myself to a clarification of the famed and famously misinterpreted spatial metaphor of the economic foundation and the political-legal superstructure.

The most common misunderstanding of this metaphor posits that the economic foundation absolutely determines the ideological superstructure. In this view, all legal, political, philosophical, and religious structures and forms of consciousness are reducible to a reflection of the present economic situation. This perspective, held primarily by various vulgar Marxists of the second international and by critics of Marx (esp. the Weberian conception of Marxism), has come to be labeled as economically reductive and subsequently critiqued by dozens of 20th century Marxist, e.g., Althusser, Gramsci, Lukács, Lenin.

Funny enough, Marx’s preface presents the relation between the economic and the superstructural with an ambiguity which seems to foreshadow both misinterpretations. First, he states that “the mode of production of material life conditions the general process of social, political and intellectual life,” then that “it is not the consciousness of men that determines their existence, but their social existence that determines their consciousness” (KM, 20-21). These two sentences chronologically follow each other but refer to two different (albeit synonymous) concepts for describing the relationship between material life and the ideological superstructure, viz., conditions and determines.

Although synonymous, ‘conditions’ carries conceptually an openness for a less rigid affecting relationship. To say that something conditions can range from meaning that it influences to determines. Given the conceptual ambiguity, it would seem that the economic reductionist group would read conditions qua determines while the group which reacts to the reductionists would read conditions qua influences. Between this binary of blue and red pill, can we ask for another color?

As Althusser noted,3 in a seemingly contradictory manner the superstructure is determined by the economic base while nonetheless sustaining a “relative autonomy” in relation to it, effectively allowing it to have “reciprocal action” upon it. It is important to note that this Althusserian formulation is actually a reconceptualization of how Engels dealt with the issue in a 1890 letter response to Conrad Schmidt. In this letter from an aged Engels, we find an elucidation for this often-misunderstood spatial metaphor, and consequently, a clarification of the scope of rigidity the concept of determination carries in his and Marx’s works.

This letter, along with the others with which it was jointly published as Engels on Historical Materialism, gives a fascinating insight into how determination ought to be read in the Marxist tradition. Before Engels deals with the question of the economic foundation’s determination of the superstructure, he examines production’s (as in the moment, the “point of departure,”4 not the whole) determinative relation to the moment of exchange, and the moment of exchange’s determinative relation to the newly separated money market. He says,

Production is in the last instance the decisive factor. However, as soon as the commercial exchange of commodities separates itself from actual production it follows a movement which, although as a whole still dominated by production, in turn obeys in its particular details and within the sphere of its general dependence, its own laws.

The same is true for the money market. Just as soon as dealing in money is separated from commodity exchange, it acquires a development of its own, special laws determined by its particular nature, and its own phases. Yet they all take place within the given limits and conditions of production and commodity exchange

The same relational function of determination/conditioning is sustained with the economic foundation and the political superstructure (and afterwards with the legal, philosophical, and scientific aspects of the superstructure):

While the new independent power must, on the whole, submit to the movement of production, in turn it also reacts, by virtue of its immanent, i.e., its once transmitted but gradually developed relative independence, upon the conditions and course of production. There is a reciprocity between two unequal forces; on the one side, the economic movement; on the other, the new political power which strives for the greatest possible independence and which having once arisen is endowed with its own movement. The economic movement, upon the whole, asserts itself but it is affected by the reaction of the relatively independent political movement which it itself had set up. This political movement is on the one hand the state power, on the other, the opposition which comes to life at the same time with it.

These passages not only demonstrate with utmost clarity how a determinative relation can sustain within it a relative independence (what Althusser later calls ‘relative autonomy’) which allows the determined variable a capacity to react and influence that which determines it, but in demonstrating the translatability into various spheres of how this relationship functions, Engels is providing a general formulative understanding of the question on determination. In essence, the variable which determines (or conditions) sets the parameters for the determined variable, such that the determined variable presupposes the other’s boundaries for its activity. Concretely, the superstructure presupposes a specific economic foundation which has set a historical boundary on it. Within this determined space, the superstructure is relatively autonomous, enough so that it becomes capable of emergent qualities which can have a reactive or “counter-active influence” upon that which determines it.

Philosophically, the position can be labeled as compatibilist, i.e., there is a soft determination which allows for the conditioned autonomous expression of that which is determined. Therefore, although the determination of the economic foundation on the superstructure is not absolute (hard determinism), neither is it nonexistent. Engels critiques both positions: he argues it is “altogether pedantic to seek economic causes for all” things, asserting that in doing so Paul Barth is “contending against windmills,” while also criticizing the position which altogether either denies determination or places the primary source of determination on the wrong variable as participating in “ideological conceptions” whereby the real relationship is inverted and placed on its head, making one take the “effect for the cause.”

Why do these misunderstandings arise? As the conclusion in Engels’ letter states,

What all these gentlemen lack is dialectics. All they ever see is cause here, effect there. They do not at all see that this is a bare abstraction; that in the real world such metaphysical polar opposites exist only in crises; that the whole great process develops itself in the form of reciprocal action, to be sure of very unequal forces, in which the economic movement is far and away the strongest, most primary and decisive. They do not see that here nothing is absolute and everything relative. For them Hegel has never existed. Yours, etc.