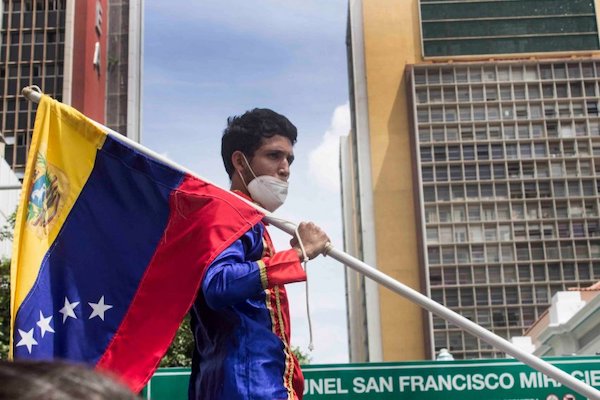 Protester at a rally calling for jailed workers to be released, in Caracas on June 22. Photo: Surgentes/FB

In the face of a prolonged and deep economic and political crisis, Venezuela’s government has embarked on a “turn to the right” in economic policy, while resorting to repression against the left.

This is the conclusion of a new report released by human rights organisation Surgentes, Turn to the right and repression to the left: Human rights violations against Venezuela’s popular camp (2015-2020).

The report says this shift–publicly defended by the government as a tactical turn–directly clashes with “the essential pillars of Chavismo”, the political movement forged by former president Hugo Chávez.

Its findings, which are the result of extensive interviews and fieldwork, echoes what some sections of Chavismo have been arguing for a while.

Federico Fuentes: Could you outline what changes in policies or actions led the group to conclude that the government has turned to the right.

Antonio González Plessmann:  The turn to the right has occurred both in economic and political terms.

Regarding the economy, we have seen a range of measures implemented with the aim of attracting private capital at the expense of social rights.

With the exception of this last point, we are basically talking about measures that the right has been requesting for more than two decades, and which Chavismo had not ceded ground on, because they run contrary to its programmatic aims.

By aims, I mean its support for increasing popular power–through handing over the means of production to the people and promoting self-governing communes–and a strong state that controls strategic goods and services for the benefit of the majority, all within the framework of a transition towards a democratic alternative to capitalism.

These aims have been cast aside by the governing elite.

This economic shift has been accompanied by a progressive closing down of democratic spaces. But it is important to contextualise this tendency.

Until 2015, Chavismo had responded to each crisis, to each anti-democratic assault by the opposition, with calls for mobilisation, self-organisation and popular participation, in elections and on the streets.

The important electoral defeat suffered by Chavismo in the 2015 parliamentary elections constitutes a point of inflection.

The opposition’s control of the National Assembly (AN) allowed the right wing to designate hostile anti-government authorities to other national public powers. It was also clear that it had the necessary support to activate a presidential recall referendum.

This produced a change in Chavismo: consultations and electoral processes, at the levels of state institutions as well as territorial popular power, were avoided, restricted or adjusted to suit the government.

Federico Fuentes: How do you explain this turn?

Some are internal, the result of changes in power relations and the governing elite’s management of the economy, and others are external, in that they are due to the international right’s attacks.

The blockade imposed by the United States and European Union runs systematically contrary to the protection of human rights. Its impact on the population is devastating and criminal. It seeks to generate a change in government, which is a violation of our right to self-determination.

With all its contradictions and internal tensions, in Venezuela there has been an attempt to construct a democratic alternative to capitalism that is independent of the US. This is something that imperialism cannot tolerate. What is occurring today cannot be understood outside of the framework of this existing conflict.

By escalating this conflict, the U.S. and EU are among those responsible for the deterioration of the governing elite, for the tactical turns it has taken, which ended up becoming strategic.

In terms of internal factors, we have to say that control of a state that administers oil wealth has, throughout our nation’s history, been tied to the emergence of capitalists associated with the political class. This has also been the case in the past decade.

Corruption and the discretionary use of public resources to benefit certain economic sectors has generated a network of (legal and illegal) economic interests that have consolidated themselves and worked to undermine the anti-capitalist component of the Bolivarian Revolution.

That is why, when the blockade obliged the government to adopt emergency measures, the governing elite had little problems in embracing economic measures commonly associated with neoliberal adjustment programs and promoting the role of business to confront the crisis.

The problem with this is that it involves a transformation in what Chavismo stands for. It reduces the role of the people, who were previously the protagonists of the Bolivarian Revolution, and represents an abdication in the face of capital.

Federico Fuentes: What form has the repression of the left taken? Do you believe there is a direct relationship between the turn to the right and this repression?

Antonio González Plessmann:  The government continues to identify as left-wing. In fact, the president said he felt offended by accusations that he was repressing the left. But he has begun questioning what he calls the “outdated left”, “the left’s infantilism” and the “exquisite left”.

While there are cases where left sectors have been clearly targeted, repression is mostly aimed at what we call the popular camp; that is, campesinos that fight for the democratisation of land or workers who struggle for their labour rights.

We believe a relationship exists between the package of economic measures and the package of repression that inherently comes with it. It is not possible to implement economic adjustment without generating conflict.

And if it is not possible to generate consensus on the need to violate social rights, then the only option left is coercion.

Federico Fuentes: Given the difficult situation Venezuela finds itself in, one could argue these measures represent a negative, but necessary retreat. Why do you argue that the government has broken with Chavez’s legacy?

Antonio González Plessmann:  There is no doubt that we have seen a mutation in the governing elite. It no longer raises the Chavista program, even if it continues to quote Chávez and use his image.

To illustrate the contrast between Chávez and the measures I have talked about, here are some quotes that have been used as titles for their videos: “It is impossible to advance to socialism using the tools of capitalism”, “The hegemony of social property must impose itself”, “Here nothing will be privatised”, “Beware of a Bolivarian oligarchy in our ranks”.

The contrast is evident. Chávez almost seems to be directly questioning the current turn of the political elite.

The governing elite justifies its turn to the right as the only option available to it. It says it is a tactical, not strategic, turn.

But it seems, at least highly unlikely, that such a turn, which supposes the creation of strong economic interests, could be reversed in favour of the post-capitalist aspirations of the Chavista program.

Federico Fuentes: Finally, could you tell us a bit about Surgentes?

Antonio González Plessmann:  Surgentes is a collective that was formed eight years ago and whose areas of focus are strengthening popular power and human rights. It is made up of left militants with three decades of experience in human rights and who have worked at the level of activism as well as in the state and academia.

Several of us were part of various attempts to construct a police reform consistent with human rights during Chávez’s government.

Our conception of human rights activism distances us from most human rights NGOs in the country, which have a liberal outlook and are made up of opposition-aligned middle-class professionals.

Our vocation is openly anti-capitalist and from a class perspective. We identify as Chavistas.